The Passing of Walter Cronkite 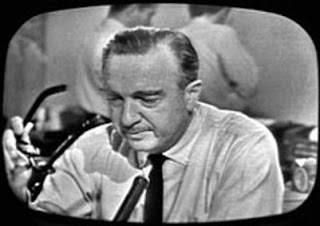 The year was 1980. I was a boy from Queens, NY, on my way towards earning a Journalism degree. Like so many other students of the Fourth Estate I had my idols. The role models whose greatness I aspired to someday emulate. I studied the work of perhaps the most famous newsman ever, Edward R. Murrow. I thought Watergate reporters Carl Bernstein and Bob Woodward were true American heroes. And I was completely awed by Walter Cronkite, who had retired from the anchor desk at CBS that same year. He was the silver-haired, staccato'd voice of reason whom everyone trusted and took very, very seriously, especially our nation's presidents.

There are many moments in Cronkite's career that will always be remembered. When he choked back tears as he announced officially the death of President John F. Kennedy, America cried with him. When the Apollo 11 spacecraft landed on the surface of the moon and astronaut Neil Armstrong stepped off, Cronkite was speechless; as awestruck as a 15-year-old meeting Miley Cyrus. And Cronkite's power and influence was never more on stage than in 1968 after he returned from Vietnam and all but said the war was a lost cause. Then-president Lyndon B. Johnson lamented, "If I’ve lost Cronkite, I’ve lost middle America."

It's hard to imagine any one journalist in today's vast maze of broadcast and print news outlets having such devastating impact on presidential politics. But Cronkite was tough, he was courageous, and he spoke the truth from his heart and his soul. Sadly, those virtues are gone from the news business today. Makes one wonder what would've happened during the George W. Bush years if the media had someone with a pair of balls like Cronkite to challenge him on Iraq, torture and Hurricane Katrina for example. Instead, the press was utterly neutered during those eight years, more concerned with preserving its White House gala invites than reporting the news in the take-down mold of Woodward and Bernstein. I'm convinced Cronkite would've single-handedly prevented Bush's second term from happening had he been back at the anchor desk.

Years after Cronkite retired he gave an interview where he spoke of the young John F. Kennedy Jr.'s salute to his father's coffin as it passed during the funeral procession after the Nov 22, 1963 assassination. Cronkite broke down, attempted to compose himself, and through tears smiled and sheepishly offered, "Anchormen aren't supposed to cry." But what Cronkite really taught us was that true leadership and inspiration doesn't come with cowboy swagger and machismo. It comes from being so in touch with the populace that your emotion, your humility, your courage and your strength becomes theirs. And that's what Walter Cronkite gave America during nineteen of the most tumultuous years in our nation's history.

Just a few short years ago I had the thrill of sitting a couple of rows behind Cronkite at several youth ice-hockey games at NYC's Chelsea Piers, where my now 17-year-old son and his grandson played for the same Cyclones team. I was much too scared to approach this living legend, and would've babbled some incoherent gibberish had I done so. But I didn't need to. It was simply enough just to be in the same room with him.

R.I.P. Walter. There will never be another like you.
Posted by The Ostroy Report at 9:22 PM

Thanks, Andy. Beautifully sad. Wishing we had more newsmen like him today.

We will never see the likes of him ever again.

There are too many channels for our country to be united like we were with Walter.

"The year was 1983 . . . And I was completely awed by Walter Cronkite, who had assumed the anchor desk at CBS just the year before."

Thanks for the typo catch, Nero. Chalk 'em up to late night blogging and a "began"/"retired" mixup. Tha said, I'm incredulous that your entire takeaway of my piece is how you've played English teacher. One thing's for sure, old Wally would probably have focused on the heartfelt tribute rather than the typos.

Ostroy says, "I'm convinced Cronkite would've single-handedly prevented Bush's second term from happening had he been back at the anchor desk." Well, Dan Rather tried to contribute to the prevention of Bush's second term and he was fired for trying. No one claimed his information was incorrect....it was just not properly corroborated. What would you like to bet that Karl Rove was the source of the pesky report used by Rather. He was set up?

And Ostroy says he was "as awestruck (by Cronkite) as a 15-year-old meeting Miley Cyrus. Perhaps this is a perfect analogy, given the bent we now have for entertainment in the place of news!! Yes, our heroes have become increasingly located in the entertainment field OUT of the news! In fact we often seem to find entertainment where we used to find news.

Where do we go now for the kind of sustenance we got from Cronkite? I'm not sure! The internet is encouraging, but can it truly replace good tv news coverage and newspapers? I'm not so sure!

Walter, we'll miss ye'...we've been missing ye' since you retired!

Walter was my source of news from the time I was cognizant until he retired when I was 11. If it happened on a national or international level and he didn't tell me about it then it must not have been too important. He was all there was as far as I was concerned. When he retired I watched that new young man with gimlet eyes and thought "what a lightweight. Some nerve this kid has trying to do the news. He won't last." The joke was on me. Dan Rather was a giant as well. It might sound a little wierd, but I was born a news junkie and watched every evening. I could not have imagined a world where people didn't care about the events going on around them.