"The Jacksons:" The Ultimate Reality Show 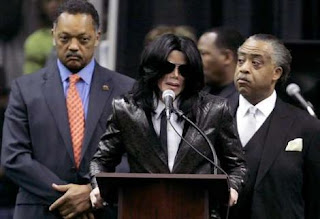 I must be losing it. I'm finding myself near-obsessed with the Michael Jackson story and all its bizarro, sordid and sensationalistic details. From Larry King's nightly hour-long expert-testimony-filled JackoFests to Matt Lauer's morning Today Show tours through Neverland, I've become like a jammie-clad high school girl catatonically-captivated by The Hills. The only thing missing is the incessant texting to my pals to gab about it all.

Let's face it, if you're into train wrecks, it doesn't get much better than this. In the age of reality television, this is the ultimate real-life family freak show. Welcome to The Dead King of Bel Air. The life and death of Michael Jackson is a deliciously perfect blend of The Swan, Wife Swap, The Bachelor, American Idol, Celebrity Rehab, Survivor, Cops and The Surreal Life. And I'm fucking hooked.

There's one helluva ensemble cast in this sideshow. We have Papa Joe Jackson, the verbally and physically abusive patriarch who mourned his son's death by immediately basking in the limelight of the BET Awards while practically hawking T-shirts from his trunk. There's sister Janet, who also chose the BET stage to share her pain. There's brother Jermaine, whose healing process required a little Neverland facetime with Lauer . There's also Diana Ross, who likely is about as surprised to learn she's the children's back-up guardian as I would be if I was in the will. (By the way, if something happens to me I think I'd like Joni Mitchell to raise my young daughter. Joni's mature, mellow, sings great and probably has a mad-cool house in Laurel Canyon. Nah, that's a dumb idea. Better stick with the existing plan).

We also have the shameless, attention-starved, sycophantic, blood-sucking media-whore leeches Al Sharpton and Jesse Jackson, who've been about as ubiquitous as Gov. Mark Sanford's love life this past week. Rumor has it that the Dynamic Duo of Dogma are fighting over who gets to eulogize MJ who, a week after his death, is still not buried. I guess when the family's too busy attending awards shows and giving Neverland tours that leaves little time for funerals. Apparently, they can't find the proper place for Michael's grand send-off. Seems like the Rose Bowl, Staples Center and Dodger Stadium are all booked. May I suggest a quaint little church in the Valley perhaps? One large enough to accommodate family and close friends? Ya know, the way other people do it? This is supposed to be a funeral, not a fucking Jackson Reunion Tour. How about just putting the man in the ground with some dignity already?

I suspect the Jackson Family Circus is about to get even more
freakish though. We've yet to to hear from Debbie Rowe, the surrogate who bore two of MJ's kids, and whether or not she's gonna fight to get them back. We've yet to hear from the Supreme Diva herself, Ms. Ross, who's either out at Toys R' Us stocking up on goodies or huddled with her lawyers and publicists. There's the 2002 Will and Testament, which may or may not actually be the "Last." There's the certain legal battles over Jackson's bazillions and the greedy landgrab that'll come from all sides. There's the much-anticipated toxicology report and official autopsy results, which may or may not paint a sad tale of a drug-riddled overdosed cultural icon. Then there's the countless nurses, doctors, lawyers, promoters, colleagues, spiritual advisors and friends who are crawling out of the woodwork to share the juicy lurid details of Michael's life in their insatiable quest for their proverbial 15 minutes. We're also sure to have more tell-all books, TV shows and bio-pics than we could ever have imagined. And speaking of movies, here's a little prediction: "The Michael Jackson Story," starring girlfriend-beating pop star Chris Brown in a career-reviving role. The back-story is tremendous: one tortured soul portraying another.

To be sure, Jackofest is going to be with us for a very, very long time.

>There's sister Layota, who also chose the BET stage to share her pain.

Actually, it was Janet.

Watching the tour of Neverland on the Today show, I thought it was amazing to see his dance studio floor worn out from his frequent spinning around in that spot.

Have you counted how many times Larry King has screwed up the names of the guests? I loved when he called Lou Ferrigno Lou Ferragamo.

It's ironic that Ringling Bros. was set to move into the Staples Center the same day as the Jackson memorial, according to today's report. One circus is enough, don't you think?