Random Thoughts for a Monday Morning 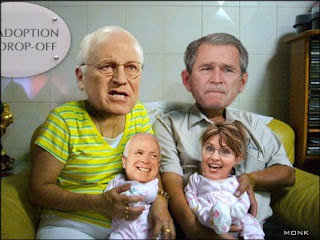 How come the 911 attack, which occurred 9 months after Bush took office "didn't happen on his watch" and "is Clinton's fault" according to many bull-headed Republicans yet, as House Minority Whip Eric Cantor says, "it's now Obama's economy" after just 5 months?

For sure, let's not focus on the eight years it took Bush to destroy the economy when we can blame Obama for not fixing this colossal mess in his first 5 months.

How can Obama's stimulus plan have "failed," as a chorus of leading Republicans have now charged, when just $57-million of the $787-billion total has been spent so far?

How and why can General Motors so gleefully come out of Chapter 11 bankruptcy just 40days after its sky was falling? Am I missing something?

How is that Wall Street powerhouse Goldman Sachs can report a $2-billion profit (that's profit, kids, not sales) for the month of May (as reported in Monday's NY Times) after needing a government bailout just last Fall? Something smells fishy....

Why is it that some hard-headed Republicans, like Pat Buchanan on Monday's "Morning Joe" MSNBC program, refuse to pronounce Judge Sonya Sotomayor's name correctly (So-to-may-OR), even after fellow guest Chuck Schumer kept saying it correctly? A little not-so-subtle racism perhaps?

Now that we've learned former VP Dick Cheney instructed the CIA to conceal from Congress the administration's interrogation and torture policies, will the vicious right wing attack machine apologize to Nancy Pelosi, who blew the whistle on this in May?

Only a true "mayv-rick" like Sarah Palin can attempt to turn quitting into virtues people can and should respect and admire.

Do you really think Obama was checking out some 17-year-old Brazilian girl's tush? And even if he was, still better than unjustly invading Iraq and killing 5,000 U.S. soldiers and tens of thousands of others, no? Maybe if Bush had checked out some hottie's ass instead of obsessing over Saddam's, the country'd be a lot better off right now.

Since the "Twitter Nation" gave itself so much credit for advancing Iran's post-election rebellion, can we now blame Twitter for its apparent, and unfortunate, failure?

And finally, a non-political thought: Is it really a question whether or not Michael Jackson wanted to be white? If his changing skin-tone over the years leaves any doubt, how about the fact that he chose a white surrogate and he has three white kids? How come this "proud black man" doesn't have black children? Something to think about....


On another note, we could use your help at The The Adrienne Shelly Foundation. We're a 501 c 3 tax-exempt, non-profit organization dedicated in my late wife's honor, and with a simple mission: supporting women filmmakers. Adrienne, who wrote, directed and starred in the hit film WAITRESS, was killed November 1, 2006. Through the Foundation, her commitment to filmmaking lives on. We've established scholarships, grants, finishing funds, screenwriting fellowships and living stipends at NYU's Tisch School of the Arts/Kanbar Institute of Film; Columbia University; American Film Institute; Women in Film; IFP; the Nantucket Film Festival; the Tribeca Film Institute; and the Sundance Institute. Your generous contribution will go a long way towards helping us achieve this very important mission. Please click here to make a donation. Thank you.
Posted by The Ostroy Report at 8:42 AM

The GOP genuflectors will believe anything they're told: even that the Left Wing believes anything that THEY'RE told.

From my interactions with them, I'd say the Right Wing in this country is unhinged, they need to go back to mindless consumption of status goods.

Here's a random thought: Why did Ostroy significantly drop the number of the stimulus to 787 Million when it was 787 BILLION?

I don't care whose fault anything is. I want everything fixed and I want it fixed right now. I've had enough of lies, excuses, promises broken, cover-ups, spin, sensationalism, racism, sexism, agism, and mostly stupidity and the inability to do even an adequate job in running the government and lately that might include saving the country.

Billion. Of course, Jake. Thanks for the catch.

Re: Michael Jackson. There have been suggestions that he suffered from a dermatological disease that caused the loss of pigment from his skin. That may or not be true. There have been other suggestions that he suffered from all sorts of psychological problems and disorders due to the constant prfessure form fans, media, etc. from age 5 to his death. That all is probably true.

I think it is probably a waste of time and misuse of position for a politically oriented blog to be musing on MJ's preference for black or white skin colour.