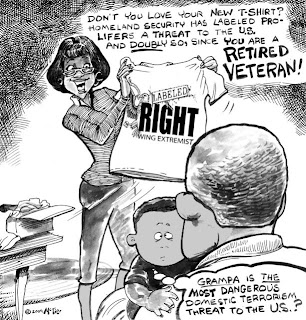 On Wednesday, 88-year old WWII veteran, rabid anti-Semite and racist James von Brunn walked into the Holocaust Museum in Washington DC and opened fire, shooting to death a heroic 39-year-old security guard. Nine days earlier Abdulhakim Muhammad, a Muslim convert, fatally shot army recruiter Pvt. William Andrew Long, 23, in Little Rock, AR. The day before that, controversial abortion Dr. George Tiller was shot dead in his Wichita, KS clinic. And ten days prior to that the FBI arrested a four-man homegrown terror cell that planned to blow up two Bronx synagogues while simultaneously shooting down a commercial jet airliner. There's something crazy and violent in the air lately, with much of it rooted in an alarming increase in intense right-white hate.

Back in April, the Department of Homeland Security issued a report citing right-wing extremism and warned that "White supremacist lone wolves pose the most significant domestic terrorist threat because of their low profile and autonomy — separate from any formalized group — which hampers warning efforts." The 9-page document erupted into a political shitstorm, and unleashed a torrent of harsh criticism of DHS Chief Janet Napolitano, who was vilified over her suggestion that returning war veterans in particular might be susceptible to these violent radical groups who could turn them into homegrown terrorists. Those piling on the Napolitano-bashing-wagon included leading conservatives such as House Minority Leader John Boehner, former House Speaker Newt Gingrich and radio blowhard Rush Limbaugh. The attack on Napolitano was so vicious, so partisan and so premature but now she and DHS appear quite prescient, don't they? Funny how two months and back-to-back murders by right-wing wackjobs can shine a whole new light on things.

Earlier in the day Wednesday I appeared on FoxNews' Strategy Room, where a lengthy panel discussion took place about the Little Rock army murder. This was hours before ethe D.C. shooting news broke. Some in the group asked "where's the (media) outrage," and were incredulous as to the lack of coverage of Pvt. Lang's killing versus that of Dr. Tiller's. There was also great concern expressed that not enough attention was being placed on this type of violent crime by extremists. I reminded the panel of the April DHS report, but more importantly, of the beating Napolitano took over it. I suppose conservatives will be giving Napolitano and the security report another look after Wednesday's shooting death at the Holocaust Museum.

So why the recent spate of deadly right-wing hate crimes? As Salon.com's Joan Walsh cited, it could be in no small part due to the incendiary rhetoric of talking heads like Bill O'Reilly and Limbaugh, who've been accused of fanning the flames of hate with their inciteful on-air rabble-rousing. O'Reilly relentlessly attacked Dr. Tiller for years, over two dozen times in fact, calling him a "Baby Killer" and accusing him of doing "Nazi stuff," while warning of "Judgement Day." Over on the radio, Limbaugh told his audience last week that President Obama is more harmful to America than our terrorist enemies. Said Walsh on MSNBC's Hardball Wednesday night: "When you say that our president is more dangerous than al Qaeda, you've gone off into crazy nutjobland. You are off the charts crazy, and you are whipping people up."

Is it any wonder then that these right-wing lunatic freaks feel a sense of duty, of obligation, to 'right the wrongs' that these instigators in the media hammer into their psychotic heads day after day? Perhaps law enforcement authorities should begin investigating the role conservative commentators like O'Reilly and Limbaugh play in the death of innocent people. Maybe then these despicable hate-mongering loudmouths will shut up once and for all.


On another note, we could use your help at The The Adrienne Shelly Foundation. We're a 501 c 3 tax-exempt, non-profit organization dedicated in my late wife's honor, and with a simple mission: supporting women filmmakers. Adrienne, who wrote, directed and starred in the hit film WAITRESS, was killed November 1, 2006. Through the Foundation, her commitment to filmmaking lives on. We've established scholarships, grants, finishing funds, screenwriting fellowships and living stipends at NYU's Tisch School of the Arts/Kanbar Institute of Film; Columbia University; American Film Institute; Women in Film; IFP; the Nantucket Film Festival; the Tribeca Film Institute; and the Sundance Institute. Your generous contribution will go a long way towards helping us achieve this very important mission. Please click here to make a donation. Thank you.
Posted by The Ostroy Report at 8:54 PM

Sad to say, there are more folks out there who blame everything on those of the Jewish faith.

We have some very sick folks in our country.

Notice how the righties go for murder. As much as we on the left hated the policies of Bush/Cheney, I never heard of wanting them shot.

The DHS report that makes an interesting contrast to the "bin Laden intends to hit US" report that Bush failed to act on.

Is building the coalition for those tax cuts for the rich so important that they have to pretend to lock arms with the Far Right?

Well, we know Rove seems to think so, but it looks like a slug of his Permanent Majority is going to be permanently behind bars.

"...I'm about as far as you can get from a white supremacist. I posted [a now deleted comment] to show how acts of violence on an individual basis are being promoted by these sick bastards. I ran across an article about the Aryan Nation regrouping and took a look at their web site. I wasn't ready for the extent of violence being promoted there, it's pretty disgusting."

This poster's original comment quoted extensively from an Aryan Nation blog post, calling upon those readers to rise up as lone wolf attackers, claiming that anything more organized would be suppressed. I can't tell you how long the heat has been turned up so high, but many of my co-workers buy into the sort of crap that Aryan Nation pushes, and their rhetoric is growing more violent. They live to fight, destroy, and kill "the others". The only beneficiaries of this talk are to be "God's white people" - and they don't mean Ashkenazi.

Just as the German industrialists used Hitler's bully boys to eradicate limitations upon the corporate control of Germany, so it now appears is happening here in the US. Certain far-right-wing persons are just awaiting their opportunity to put everyone but themselves into economic - if not literal - bondage.

I wish Obama would wake up to this threat before it crushes what remains of our democratic republic. But he's too busy bailing out foreign-owned Wall Street banks and screwing organized labor to worry about his Main Street fellow citizens. We can't save the world if we can't save ourselves - and the time grows short.

I think you are going to eat crow on this one. New evidence points to this nut job hated conservatives. I have yet to see any evidence that led anybody to believe he was a conservative; yet it is thrown out there like a fact.

There may have not been much media coverage in the death of Pvt Long.
Look back about 6 weeks or so ago and see how little media coverage when a right wing extremist killed 3 policemen in Pittsburgh.
And the media staunchly refuses to call these killers domestic terrorists.

Are you speech writing to Paul Krugman lately, or at least he must have been reading your Blog. Maybe you are next in line for a Nobel Prize?

Seems to me you play a dangerous game Andy