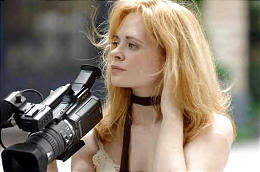 I normally blog about politics, but today I write about another subject that is very important to me. The Adrienne Shelly Foundation (ASF), a non-profit organization dedicated to the memory of my late wife, writer/director/actor Adrienne Shelly ("WAITRESS") who was murdered in 2006, launches its star-studded 3rd annual celebrity auction on eBay Monday evening. The auction will run from September 20-30. Items can be previewed at www.ebay.com/ASFoundation.

I founded ASF with a singular mission: to support women filmmakers. Since its inception, ASF has partnered with the industry's finest academic and filmmaking institutions such as AFI, IFP, Women in Film, Sundance Institute and Columbia University and has awarded 20 grants and scholarships. One grantee, Cynthia Wade, won an Academy Award in 2008 for her documentary "FREEHELD," which ASF helped fund.

Bidding is scheduled to begin Monday, September 20 at 4:00pm PST.

Photo credit: Jordan Matter www.jordanmatter.com
Posted by The Ostroy Report at 9:02 AM

I saw Adrienne for the first time recently while surfing channels. Can't remember the name of the movie, as they didn't broadcast that key piece of info. Wow! I was impressed. I missed her immediately, and I never even met her, so I can't even begin to imagine your pain with her passing. Hopefully you will heal soon, and, as I'm sure she would wish, find peace and love again. A-salaam-alechum from Saudi Arabia.