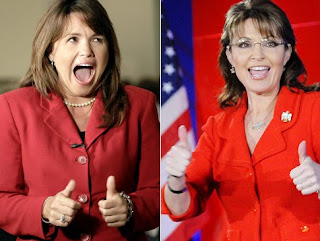 It's the hottest band in politics: Sarah & the GOPettes. Ya got Palin, Michelle Bachman, Nikki Haley and Christine O'Donnell. They're young, personable and attractive, and are out there on the 2010 Tea Party Tour whipping the radical right-wing fringe base into a veritable frenzy. O'Donnell's the latest addition, with her stunning defeat of 42-year Delaware Republican career-politician Mike Castle in Tuesday's Senate primary. Heck, I'll even throw the 61-year-old Sharon Angle into this group.

Palin, her GOPettes and all the other Tea Baggers like Newt Gingrich, Rand Paul and Joe Miller speak in racist code language ("restoring America," "taking the country back"), portray themselves as grass-roots revolutionaries, but lack any real qualifications commensurate with one of the most important jobs in the world. What they're expert at is throwing around irresponsible, incendiary rhetoric at every turn while claiming to be part of America's diverse fabric.

Yet during O'Donnell's victory speech there appeared to be just one black person in the entire room. In a pathetic attempt to prove the Tea Party's 'big tent' claim, he was quickly ushered to the stage and very noticeably and awkwardly pushed right beside her as she began to speak. But then O'Donnell introduced him as the campaign's lawyer. And truth is, he had a decidedly uncomfortable look on his face the entire time as if to say, "Hey, I'm not so sure how much I'm into this whole 'returning America back to what our Founding Fathers envisioned' thing. In case you hadn't noticed, black folks didn't fare too well back then!"

To be sure, O'Donnell knows how to fire up voters. But in a virtually all-Democratic state like Delaware, she's gonna fire up more Democrats and Independents against her, which is why she's unelectable in the general election, and which is why iconic Republican operative Karl Rove gave a delicious smackdown to Fox's Sean Hannity Tuesday night in telling him how utterly wrong he was about her chances of winning in November against Democrat Chris Coons. It was a beautiful thing to watch. Kind of like the wise old parent trying to knock some sense into the young, hot-headed, know-it-all kid. Hannity was very visibly shaken by Rove's on-air lecturing.

Rove also spoke of O'Donnell's questionable character, and that she owes $12,000 in taxes; foreclosed on her home; lied about her education; and has made very bizarre claims that her opponents "Follow me home at night. I make sure that I come back to the townhouse and then we have our team come out and check all the bushes and check all the cars to make sure that — they follow me....They're hiding in the bushes."

These skeletons are also why the GOP won't be throwing its support behind O'Donnell's futile campaign. As Rove authoritatively assured Hannity, "This is not a race we're going to be able to win." And he lamented how O'Donnell's victory could translate to the GOP's failure to win a Senate majority. Give Rove credit. He knows a thing or two about winning.

The emergence and success of the Tea Party is a direct result of the Bush/Cheney/Rove dumbing-down of the Republican electorate. For eight years they lied to them about the Iraq war, fear-mongered over terrorism, distracted them with gay marriage and veered them so far away from their own economic self-interests to the point where they were well-primed for Sarah & the GOPettes' ignorant, empty-suited populist rhetoric. They literally dumbed 'em down so far that it didn't take much for Mama Grizzly's even dumber Tea Bag minions to steal them away from Mitch McConnell, John Boehner and the mainstream GOP leadership. I guess you reap what you sow. The Tea Party fanatics are Rove's chickens coming home to roost.

And now the unthinkable is occurring: O'Donnell, Hannity, Rush Limbaugh and others are attacking the heretofore venerable Rove, turning on him as if he was Sean Penn:

"Karl has admitted that one of his mistakes was not defending Bush against all of these insane, stupid, slanderous, libelous attacks against Bush for eight years," Limbaugh said. "But I've never heard ... Karl so animated against a Democrat as he was against Christine O'Donnell last night....Why is he so mad at a Republican?" Well Rush, when Coons wins in November and costs the GOP what would've been a very likely Senate seat and perhaps the majority, you'll have your answer.

With O'Donnell's victory, Tea Baggers are sending the same kind of naive, misguided, anger-fueled message to the Republican Party that the Naderites sent to Democrats in the 2000 presidential election. Syphoning precious votes away from then-vice president Al Gore, these foolish voters' real message soon became quite clear: "Welcome to the White House, Mr Bush." And for eight miserable years they got in return the exact opposite of everything they stood for. Now with nominees O'Donnell and Angle, for example, this same sort of Tea-Party-poured message will not only cost Republicans key seats, but could very well be the thing that keeps Democrats at the controls.

The The Adrienne Shelly Foundation is a 501 c 3 tax-exempt, non-profit organization dedicated in my late wife's honor, and with a simple mission: supporting women filmmakers. Adrienne, who wrote, directed and starred in the hit film WAITRESS, was killed November 1, 2006. Through the Foundation, her commitment to filmmaking lives on. We've established scholarships, grants, finishing funds, screenwriting fellowships and living stipends at NYU's Tisch School of the Arts/Kanbar Institute of Film; Columbia University; American Film Institute; Women in Film; IFP; the Nantucket Film Festival; the Tribeca Film Institute; and the Sundance Institute. Your generous contribution will go a long way towards helping us achieve this very important mission. Please click here to make a donation. Thank you.
Posted by The Ostroy Report at 6:59 PM

Thank you, Sarah Palin, Tea Bag Party, right wing fanatics!
If these people think that the average American is going to allow whackos like these--to lead this country, well, they are dumber than they think. I was not overly enthursed about November this year---until I saw what the opposition is going to be! NO WAY!

If it proves that the tea baggers can't get elected in November, many don't really care. They would rather purge the repub party than win.

I hope in the coming weeks those voters who are upset that Obama and the Dems didn't get it down in 2 years will realize that if the tea baggers and the repubs gain control, we will have two years of gridlock, government shut down, and endless investigations. Two years of stalmate and continued pain for the American people.

Please don't think by not voting you will just punish the Dems. No, it will punish all of us too.

sorry, but you've got it seriously wrong. the "exact opposite of what i voted for" currently runs the country, just as they did five years ago, ten years ago...palin, o'donnell et al are idiots--so what? its just another dancing with the stars show while the planet is ravaged. this is neener-neener politics and it is distracting bs. we have now a proudly Reagan Whitehouse--take a look.

P: I disagree. If what you say is true Social Security, Medicare and Medicaid would already be gone.

The Dems have fought to keep them all these years.

Don't be fooled. We will rue the day big time if the tea baggers take over.