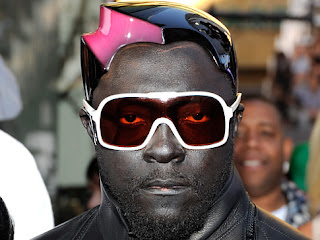 Politics isn't my only love. Being a music lover as well I decided to tune in to MTV's Video Music Awards Sunday evening. I regret that I did. Though only 50, watching this show left me feeling completely out of touch with today's music scene. I'm sorry, but I'm still trying to make my way through the Pearl Jam catalogue. I simply have no idea who or what a Drake or a Ne-yo is. And what about Kings and Queens? Isn't that the sitcom with the chubby guy?

So watch I did, taking notes, and wondering how the entire music biz has seemingly passed me by.

The program was hosted by comedienne and talk show host Chelsea Handler, who proudly acknowledged that she was the first female host in the show's 16 years. And what a great choice she was. This woman is not only funny, as my much-cooler-than-I 24 and 22-year-old daughters have been trying to tell me, she's also smart, sexy and wickedly brash, with a tongue so sharp she could cut right through Pauly D's hair. In her intro she threw props to toddler heartthrob Justin Bieber:

"His song "Baby" is so amazing, an amazing love song...imagine how good his music will be when he sees a vagina."

Poor Bieber. During his performance he surrounded himself with a gaggle of 6-year-old back-up dancers in a desperate attempt to look older than 10.

And am I the only one who was a little tired of seeing the uber-tanned and talentless Jersey Shore mooks? Mike "The Situation" Sorrentino is clearly starting to believe his own hype, while "Snookers" can't, no matter how hard she tries, hide her "what the fuck am I doing here" look, as if she knows she's in minute-9 of her countdown from 15.

Will.i.am came out looking like a cross between Blue Man Group and Al Jolson in a wet-suit. He did a duet with Nicki Minaj, a hip-hop cutie with an ass so big the Israelis could build settlements on it. She makes J-Lo look like she needs butt-cheek implants.

And what's with all the futuristic garb? Why does every performer have to look like they're auditioning for the next Star Wars film? Can we please bring back a little flannel for the old man? Also, must every singer have a phalanx of dancer boys/girls behind them like some cheesy Vegas burlesque revue? Whatever happened to just coming out and singing? Maybe all the dancers are just a distraction from the lack of real talent in front of them?

Outside of the awesome Eminem and Mary J. Blige, the room seemed all style and no substance. And speaking of Mary, did they have to pair her up with Drake? Blige has such an amazingly beautiful, soulful voice which was drowned out by the young ring-ding. Having her do a duet with the Canadian rapper was like having to watch George Clooney do a table-reading with Snooki. Jeez, you know there's slim pickings for a 50-year old when he starts rooting for Taylor Swift.

Sofia Vergara looked gorgeous, but was so hard to understand she made 70's Latin star Charo sound like William F. Buckley.

My favorite moment of the night was a very "If I Could Turn Back Time" decked out Cher (looking about 35, mind you), handing out the Video of the Year award to pop sensation Lady Gaga, who took home a total of eight awards. It was sort of a cool passing-of-the-torch moment. Only thing is, Cher's torch officially blew out about 40 years ago. (By the way, if Lady Gaga married Goo Goo Dolls lead singer John Rzeznik, would she be Lady GooGoo GaGa?)

You feel out of it?

I didn't even know it was on.

Once upon a time in this country, you could listen to radio or look at the Top 40 pop charts and come across music that was not only popular, but worthwhile, as well.

The likes of The Beatles, Elvis (in his prime), Chuck Berry and Bob Dylan made not only among the most popular music of the 1950s and 60s, they were also the most talented makers of music in that era.

Today, it's totally different. The best music today rarely, if ever, gets played on the radio or featured in a Top 40 chart. Arbitron ratings and computer-generated playlists pretty much destroyed radio and the dumbing down of American culture since 1980 did the rest.

Lady Gaga is regarded by many as the best that we have in music talent today.
But she is nothing more than a mediocre, overrated pop artist, with a cynical talent for self-promotion, whose music will be forgotten 20 years from now (when true female talents like Kate Bush, Patti Smith and Polly Jean Harvey will still be appreciated).

The bottom line: there IS still great music out there. But these days, one must do some legwork to go out and find it. You certainly won't find it watching corporate crap like MTV's Video Music Awards, which are an utter waste of time.

Ostroy - you nailed it. I stopped listening to music radio several years ago. Found a site (thesixtyone.com) and began to love music again. Real music. Not shows, people singing about real things and hell, using lyrics that make sense.

Anyone need a good change? I suggest looking up the following:

You can't go wrong with those musicians. Guarantee it.

Sadly I now feel as out of touch as my own Father did in the sixties. I know no one who listens to more than a couple of top ten new songs before reverting back to their comfort era. As always, music you like is being made, you just have to find it and since it's rare it seems even cooler when you do.