An Open Letter From God 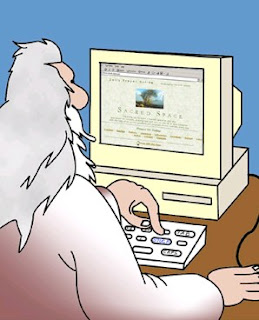 Dear Faithful.....
As I sit here thousands of years after creating you all (although some would have you believe in "evolution" or that even crazier notion, the "Big Bang Theory"), I can't help but think, "What the f**k is wrong with you people?! What I have I done? Where have I gone wrong?" Oy vey!

The world is a freakin' mess, defiled and ravaged by hunger, poverty, disease, racism, terrorism, fires, earthquakes, hurricanes, tsunamis, global warming and a heretical force of evil called Sarah Palin. And they say President Obama has his hands full...

And as if all this wasn't enough, there are now people who are committing the ultimate blasphemy by using my good name to justify their acts of bigotry and hatred. This includes that nitwit down in Gainseville, Florida who wants to burn Korans. And this bedlamite's a preacher? I must've missed his application somehow. When I find out who approved him, heads are gonna roll.

For the record, my mom, dad and I love everyone and sit in judgement of no one. You are all my children. I don't care whether you're Christian, Jew, Protestant, Baptist, Muslim or Mormon....well, maybe not Mormon....nah, just kidding! (Honestly? I do wonder about those Jehovah's Witnesses, though. That whole Armageddon thing freaks me out). Hell (can I say that?), I even love Atheists!

So the idea of burning a sacred religious book like the Koran is just plain heresy. It's religious intolerance of the worst kind. It's racist, and it's nothing I condone. And for someone like Pastor Terry Jones to claim burning these books is God's work...that I told him to do it... man, that really pisses me off. Well, this is me very clearly telling him not to do it. Jeez, what kind of church does he lead? What kind of church preaches such hate and intolerance? Exactly which God and which scripture does this behavior ascribe to? Funny, I don't remember anything in the Bible about burning Korans, and I oughtta know because I wrote the damn thing (shit, I can't say "damn" either, right?)

Let me be clear to Jones and those like him who hide behind my cloak as they spew their vitriol: you're no Christians! You say Islam is evil? No, you're the evil ones. You are vile and hateful and the exact opposite of what Christianity is all about. I didn't start this religion just to have people like you disrespect everything for which I sacrificed.

And while I'm writing, I'd like to address something else that's really been bothering me; something I need to clear the air about once and for all. I am NOT a Republican! You see, conservatives have been laying claim to faith and God (that's me) while portraying Democrats and liberals as being faithless non-believers. Well let me tell ya something. My whole family and I are liberals. That's right, raging libs. Have you seen my sandals? They're the original Birkenstocks. Seriously, have you read my book? "Love thy neighbor?" "Treat the poor fairly?" "Feed the hungry, house the homeless, clothe the naked?" "Turn the other cheek?" Not exactly the sort of crunchy stuff you'll hear often on Fox News. Come to think of it, much of modern conservatives' behavior doesn't really follow my teachings at all.

The The Adrienne Shelly Foundation is a 501 c 3 tax-exempt, non-profit organization dedicated in my late wife's honor, and with a simple mission: supporting women filmmakers. Adrienne, who wrote, directed and starred in the hit film WAITRESS, was killed November 1, 2006. Through the Foundation, her commitment to filmmaking lives on. We've established scholarships, grants, finishing funds, screenwriting fellowships and living stipends at NYU's Tisch School of the Arts/Kanbar Institute of Film; Columbia University; American Film Institute; Women in Film; IFP; the Nantucket Film Festival; the Tribeca Film Institute; and the Sundance Institute. Your generous contribution will go a long way towards helping us achieve this very important mission. Please click here to make a donation. Thank you.
Posted by The Ostroy Report at 2:22 PM

And while I'm writing, I'd like to address something else that's really been bothering me; something I need to clear the air about once and for all. I am NOT a Republican!

Does that mean you are a Democrat? Or, at least, an American?

In case I didn't make it clear. I do forgive the Muslims for burning the Bible and killinig others who disagree with their worship of me. Guess I got my favorites -- Sorry - forgive me.

First, I think the wide spread condemnation of burning the Koran is good and justified.

But I wonder where was the world wide outrage when hundreds of churches were burned down in Kosovo? I imagine there were thousands of Bibles burned not to mention murders by the hundreds.

I'm sure the Kosovo Serbs (the few remaining), are impressed.

can we please leave religion in the personal sphere of your lives? I'm really sick of the hypocrisy.

Where are the churches and their congregations speaking out about the ruthless killing around the world? Innocent people die from bombings, starvation, man-made or induced disease, genocide (palestine) and assasinations. But very few speak out that claim religion guides their lives. Are they afraid?

What of the Catholic church? Why hasn't it been shut down as the largest ongoing pedophile organization in the world? They have good intentions you say? How blessed we are.

Religion is the evil of this world. The false hopes and myth are a springboard for the fanciful to believe that nothing matters in the real world since all will be just fine in the next life. Nothing is further from the truth IMO.

The only gods I see are big screen TVs, big shiny cars, oversized homes, paganistic feedings on unhealthy foods, celebrities, weapons of mass destruction, and on and on.

If anything, your god cannot wait to destroy this nation called Amerika. Your prayers are in vain. Your hopes are narcissistic. And your dreams are extensions of your self indulgences and instant gratification.

May your god have mercy on your souls. Otherwise, you can leave that baggage behind, and realize that it is your efforts and actions that will make change. Not some mythical god waiting to launch thunderbolts at the bad guys.

I mean really - give it some thought!

Go back and reread the article.

Sorry, Gray. a poorly phrased comment. What I meant, to put it in statement form, is that God is not Republican, (as the blogmaster says) nor is he Democrat, nor is he American. In fact, why should we suppose he aligns himself with any nation? They all fall pretty short, so far as I can see.