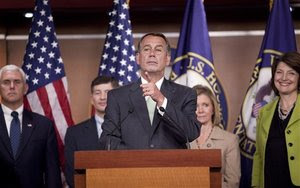 In a desperate attempt to recreate the sweeping victories of 1994's Congressional midterm elections, spawned by Newt Gingrich's Contract With America, the Republican Tea Party on Thursday will release it's "Pledge to America," a broad, unspecific blueprint for making everything in the country wonderful again. It's chock full of catchy over-reaching promises aimed at shrinking government; controlling spending; reducing the deficit; balancing the budget; creating jobs; reforming Congress; strengthening national security; honoring the nuclear family; and restoring trust. But it's woefully short on detail and substance.

And, it's bullshit. It's code-language for simply returning America back to the days of the failed Bush administration and its misguided economic and foreign policies. To the days when the GOP, as it does historically, focuses exclusively on making the rich richer while screwing the poor.

In its final "Checks and Balances" section, the Pledge to America calls for an end to the Democrats' one-party control of Washington. This is the same party that, if it wins House and Senate majorities in November, will fight to the death to also win the presidency in 2012 and return America to the days of Republican one-party rule; corrupt, special interest anti-reform days that served as the precursor to the worst economic crisis the nation experienced since the Great Depression.

So to cut through it all and expose it for what it truly is, here's the real GOP Pledge to America:

We the Republican Tea Party pledge:

-To lower taxes for the rich

-To end any program that helps you buy a house, a car, pay for college, save for retirement

-To cut Social Security and Medicare

-To repeal all those horrible Health Care Reform benefits such as no pre-existing condition exclusions; no lifetime caps; coverage for kids up to 26; and affordable coverage for everyone

-To eliminate those "unconstitutional" unemployment benefits

-To permanently freeze the minimum wage

-To cancel aid and tax breaks for small business

-To let corporations influence elections without any transparency whatsoever

-To cut funding for the arts

-To cut funding for sex-education programs

-To bust the unions

-To deport all illegal aliens

-To "take America back" to the days when blacks, Hispanics and Muslims were discriminated against and deprived of their basic civil rights and liberties

-To fear-monger and further turn Americans against Islam

-To return America to its isolationist days, and reduce America's standing in the world

There's your choice America: this, or the Democrats.
Posted by The Ostroy Report at 8:22 AM

After they cut/end Social Security, what will millions of Baby Boomers do who have been kicked to the curb?

This is white America's last stand. I am white, but it is very easy to see. They will gain seats in November which is district by district races, but where will they be in 2012 trying to win a national election? After demonizing all Americans except for white Americans, demographics will bite them in the you know what. I am disgusted and embarrassed by the face that repubs show the whole world.

It is nice to see that the liberal media has two fans and that they have been able to convice you that all of the above is true. This is the biggest distortion of the truth that I have seen and I watch/read the media.