Tea Baggers Pour Money Into O'Palin's Campaign. Time for Democrats to Do the Same for Coons 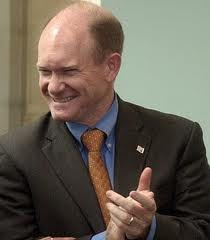 There is no more critical a race in the November midterms than the Delaware battle between Tea Party princess Christine O'Donnell and Democrat Chris Coons for the U.S. Senate seat vacated by vice-president Joe Biden. I say this with the utmost gravity and concern for the future of our nation. Quite simply, a victory by O'Palin (as I like to call her given her chilling clone-like attributes of the Queen herself) will tip the scales of political logic, rationality and decency into the hands of the crazies. I am not a fear-mongerer, but I can assure you that an America led by the likes of Sarah Palin, Michelle Bachmann, Sharon Angle, Rand Paul, Newt Gingrich, Jim DeMint and O'Palin will make the Bush/Cheney/Rove years seem like the Carter administration.

Let me say that I don't think there's a chance in hell that O'Palin can win. And I have GOP guru Karl Rove on my side. But I also don't expect to die anytime soon either, yet I still have life insurance. So think of supporting the campaign of Coons as life insurance. We don't think we'll need it, but boy will our loved ones be happy that we sprung for it. Click here to contribute money to Coons.

Prior to Tuesday's Republican primary, in which O'Palin in a stunning upset defeated 42-year Delaware career-politician Mike Castle, she had about $20,000 in the bank to Coons' $944,000. Since then, the radical Tea Baggin' crazies have cracked open their piggy banks and sent her $850,000 through her website. Coons has raised $125,000 this week.

Expect the crazies to keep sending money; funds that O'Palin will use in an unprecedented barrage of television ads between now and November 2nd to raise her awareness and character-assassinate Coons. Which is why Democrats across the nation must head to Coons' website immediately and donate as much as they can so he can combat this ad campaign with his own.

What's happening in America today is reminiscent of what the Rovians did to the electorate in 2004. They scared and distracted voters with terrorism, gay marriage, abortion and gun control in an effort to divert them away from the disastrous Iraq war and their own economic self-interests. Well, the Tea Party consists of Rovians on steroids. A small subset of Republican voters have been dumbed-down so far to the point that, as evidenced in the video below, they have no idea what the hell they're so angry about and find it difficult to articulate their thoughts. With this level of ignorance they should be called the Kool-Aid Party. Talk about being brainwashed.

So I say again, we cannot allow this woman to be elected to the U.S. Senate. Here's what O'Palin represents: she's got zero experience in business or politics. She owes the IRS $12,000 in back taxes. She's defaulted on her home. She was sued by Fairleigh Dickinson University in 2004 for unpaid tuition, and didn't get her Bachelor's degree until 2010 when she took a final electives course, but that didn't stop her from lying about her education. She advocates teen-abstinence and has waged a very public campaign against masturbation. She's accused Coons of having a gay affair. And she's made very bizarre accusations that her "opponents" hide in the bushes outside her home. O'Palin is not someone who deserves to walk the Senate's hallowed halls. Democrats must visit Coons' website now and make sure he has the necessary funds to combat her soon-to-be massive TV campaign.

Democrats need to show the crazies how much money they are capable of raising for a real candidate. One who's a distinguished humanitarian aid volunteer, lawyer and politician. It's time to show Sarah & the GOPettes that Americans aren't as dumb as they'd like them to be.
Posted by The Ostroy Report at 8:01 AM

On the other hand...

It might be better for our children if the Tea Party won... the could kill Fannie and Freddie, ending the source of 95% of mortgages...

Cut Social Security payments by 50%, but keep those payroll taxes for peyople making less than 100K rolling in...

Raise import duties, build immigration walls, and build our middle defenses in the heart of Europe.

Cut those unemployment, state grants, infrastructure maintenance spending, and health care give away to veterans.

...because Democrats would win every following election for a generation.