What I Miss About George W. Bush 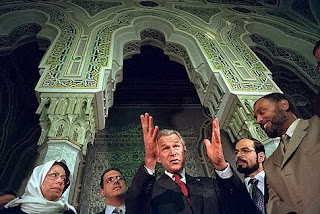 The heated controversy over the planned construction of an Islamic Community Center two blocks from Ground Zero has sparked a range of emotions--some rational, some not--from fear, anger and resentment to ignorance, racism and religious intolerance. And it shows no sign of abating anytime soon.

But if there ever was a time when Americans would've been expected to express such animosity and sweeping bias towards Muslims it was in the days, weeks and months after the 9/11 attacks. But what kept blood from spilling into the streets was the relative calm and reassuring words from then-President Bush, urging them to rise above their shock, pain and anger.

The true historical significance of Bush's behavior back then, and perhaps his greatest legacy, was in tamping down the anti-Muslim rhetoric and keeping Americans from going on an Islamic witch-hunt. Americans today need to once again hear his impassioned plea in the speech at the Islamic Center of Washington just six days after the attacks:

..."The face of terror is not the true faith of Islam. That's not what Islam is all about. Islam is peace. These terrorists don't represent peace. They represent evil and war. When we think of Islam we think of a faith that brings comfort to a billion people around the world...America counts millions of Muslims amongst our citizens, and Muslims make an incredibly valuable contribution to our country. Muslims are doctors, lawyers, law professors, members of the military, entrepreneurs, shopkeepers, moms and dads. And they need to be treated with respect. In our anger and emotion, our fellow Americans must treat each other with respect."...

..."Women who cover their heads in this country must feel comfortable going outside their homes. Moms who wear cover must be not intimidated in America. That's not the America I know. That's not the America I value...That should not and that will not stand in America. Those who feel like they can intimidate our fellow citizens to take out their anger don't represent the best of America, they represent the worst of humankind, and they should be ashamed of that kind of behavior."

Bush spoke from the heart which, for better or worse, was always his greatest strength. While I personally disagreed with virtually 99% of his policies and decisions, I still to this day respect and admire his conviction. We always knew where Bush stood on the issues. Not sure I can say the same for President Obama, who seems more concerned with playing the middle, trying to make everyone happy and in the process pleasing no one. Not liberals, not conservatives, and, unfortunately, not even himself.

So it would be an invaluable contribution to the Mosque debate, and to his legacy, to hear Bush once again be the oasis of reason in a sea of Islamophobic hate-mongering by the likes of Newt Gingrich, Sarah Palin, Rudy Giuliani, Sean Hannity, Rush Limbaugh and others who've opportunistically hijacked this issue.
Posted by The Ostroy Report at 12:21 PM

Now Andy! You know that Dubya has to say nice things about the Saudis - er, I mean Muslims in general - lest they not hold hands with him anymore!