Why the Tea Party Candidates Are So Afraid of the Media 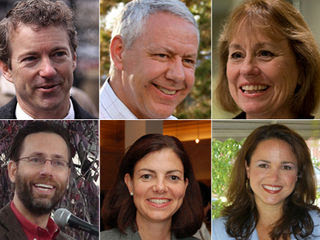 They're outsiders, they're angry and they're winning key GOP primary elections. They're the Tea Party All-Stars like Sharron Angle, Rand Paul and Christine O'Donnell. But what they also are is terrified; scared to death of going before the national mainstream media's camera's, and hence scrutiny, as they attempt to convince voters that they have the qualifications to serve the United States Senate.

And the reason for this monumental fear of the press? It's because they're all woefully lacking knowledge of policy and the issues; cannot articulate their positions; and most of all, are radical fringe wingnuts who get into an embarrassing heap o' trouble every time they open their mouths (can you say "mice have fully functioning human brains?")

O'Donnell, the Sarah Palin protege (or should we say clone) went on Sean Hannity's Fox News program Tuesday night to defend her decision--urged by Palin--to shun the national news media's talk shows. Apparently, this self-imposed gag-order excludes friendly outlets like the "fair and balanced" Fox, where her segment with Hannity seemed more like a paid campaign commercial than a serious, legitimate interview by a respectable, objective journalist. Let's just keep it all in the family I suppose, right?

So this is what it comes down to, huh? This cabal of "grass-roots" everymen and women who shake in their bootstraps as they cower from the press and voters. Who only show their faces and espouse their substance-lacking incendiary rhetoric at small town churches and halls to adoring extremists who lob softballs and give these empty-suited frauds an opportunity to bash the opposition to rousing applause.

O'Donnell cancelled all her Sunday morning interviews last weekend. So did Paul after his victory last Spring. And Angle makes like Jesse Owens and high-tails it to the exit door whenever she sees a press badge headed her way.

Just what are these Tea Baggers so afraid of, anyway? I thought they have all the answers as to fixing America's problems? You'd think they'd just jump at the chance then to share all this wisdom and insight over CNN, MSNBC, ABC, NBC and CBS too, right? And, aren't politicians supposed to be thick-skinned, able to be in the hot seat and explain their positions without losing their composure or cool as they discuss decisions that impact the health, welfare and national security of America? These are the same people who want us to believe they have the character, depth and gravitas to go toe-to-toe with the likes of Ahmadinejad, Qaddafi, Kim Jong Ill and Putin when they're utterly terrified of facing David Gregory, Bob Schieffer and Wolf Blitzer?

The The Adrienne Shelly Foundation is a 501 c 3 tax-exempt, non-profit organization dedicated in my late wife's honor, and with a simple mission: supporting women filmmakers. Adrienne, who wrote, directed and starred in the hit film WAITRESS, was killed November 1, 2006. Through the Foundation, her commitment to filmmaking lives on. We've established scholarships, grants, finishing funds, screenwriting fellowships and living stipends at NYU's Tisch School of the Arts/Kanbar Institute of Film; Columbia University; American Film Institute; Women in Film; IFP; the Nantucket Film Festival; the Tribeca Film Institute; and the Sundance Institute. Your generous contribution will go a long way towards helping us achieve this very important mission. Please click here to make a donation. Thank you.
Posted by The Ostroy Report at 3:19 PM

It doesn't matter. Repub voters are brain dead. Tea Baggers are just them running for office. They are more interested in beating a black guy in the White House than doing what is best for our country. (I am white) They are doing the bidding of corporate America.
We are reaping the dumbing down of America that we were warned about in the 1970s. Americans lack critical thinking skills. Too many have bought into the lies of Fox and massive right wing talk radio domination for a couple of decades now. How can we fight that?

This election is being fought district by district. Yes, repubs will win seats. Since corporations now have free speech rights, tons of money from outside the districts is being pumped into the races.
I guess the question is will folks realize that if they don't vote for the Dems, they are not punishing the Dems, they will be punishing working Americans like me? Don't let the repubs win. I can't imagine how bad it will be for the next 2 years with them in control. We will have total gridlock, government shut down, and endless investigations. What I hate the most is that they think most Americans agree with them.
How can that be?

What they are also hiding is the dark side of the tea party doctrine that attacks anyone who disagrees, excludes those that don't look like them, and threaten those with differing views. As this story shows, no matter the subject, if it is counter to their world view then there will be no mercy http://wp.me/pNmlT-q5

This site will help you figure out how they really feel on the issues (provided they are being honest): http://www.voteeasy.org