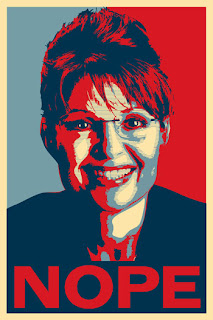 Some moments in politics seem to last forever, and other times the moments and the memories are short and quickly forgotten. So I think it's important to remind everyone from Wasilla to Washington that Sarah Palin, the Mama Grizzly who wants to be president, is a first-class quitter who didn't have the dedication and will to make it through a full term as Alaska governor.

That's right, the volatile, temperamental, policy-challenged queen of sarcasm who expects to convince us in 2012 that she's got the gravitas, character and integrity to hold the most important, challenging and stressful job in the world, bailed on Alaskans after just half her term. The pressure of the job just got too much for her, so she decided to screw voters and her commitment to public service and instead chase the almighty dollar giving rancorous, incendiary partisan speeches all over the country. This is a person who wants the toughest job on the planet? Does she think the media, Democrats and voters in general will forget this little resume blip? Palin's gubernatorial "no mas" is one pearly-white skeleton in the closet that will haunt her the rest of her political career.

And now the Wasilla Wonder has been criss-crossing the country, sending out more inane Tweets than a 15 year-old, while throwing her dubious support behind myriad Tea Party candidates, the most recent being Joe Miller, who upset Sen. Lisa Murkowski in Alaska's Republican primary. Miller and others like him have been all too happy to accept The Quitter's endorsement. They know how ravenous the Tea Baggers are when it comes to Mama Grizzly and all her moose-shootin' charms and pearls of non-wisdom.

But the bigger question is with Palin herself, and whether this little-educated, inexperienced, bad-tempered rabble-rousing quitter who lacks cultural, literary and intellectual curiosity and passion truly expects to be taken seriously as a presidential candidate in 2012 or if she's just plain delusional and drunk on her own hype.

The 2008 election showed just how few Republicans and independents wanted her in the White House, as John McCain abruptly learned. And a new poll showed that 65% of Alaskans who voted for Miller weren't at all influenced by Palin's endorsement. My guess is that two years from now Palin will once again be reminded that while some voters may salivate at the thought of hearing her speak, they still cringe at the thought of her as president. She's a quitter, and when it's time to pull that voting booth lever, no one likes or respects a quitter.

The The Adrienne Shelly Foundation is a 501 c 3 tax-exempt, non-profit organization dedicated in my late wife's honor, and with a simple mission: supporting women filmmakers. Adrienne, who wrote, directed and starred in the hit film WAITRESS, was killed November 1, 2006. Through the Foundation, her commitment to filmmaking lives on. We've established scholarships, grants, finishing funds, screenwriting fellowships and living stipends at NYU's Tisch School of the Arts/Kanbar Institute of Film; Columbia University; American Film Institute; Women in Film; IFP; the Nantucket Film Festival; the Tribeca Film Institute; and the Sundance Institute. Your generous contribution will go a long way towards helping us achieve this very important mission. Please click here to make a donation. Thank you.
Posted by The Ostroy Report at 8:20 PM

While I agree with your personal characterizations of Palin, I can't agree with all of your political ones.

As Newton Minnow once said about television, Sarah Palin IS the message. She is the personification of the false American dream that anyone can run for president, and as long as she can pull in large enough numbers to listen to her prattle about Russia on the horizon and the other 1001 Alaskan Nights, she will be in our faces every time she burps. She pulls in ratings, or else Rupert Murdoch wouldn't be spending so much of his money keeping her on the FOX staff. Those who are exploiting Palin, for whatever purpose, will continue to carry her as long as she's useful.

Now that Bristol is "Dancing With The Stars", expect to see a great deal more of Mama Grizzly. For her camp, this is all no-cost win-win. For the American voter, there doesn't seem to be a win anywhere - especially not the Oval Office. We still lose no matter what happens.

Sarah 'Bible Spice' Palin has been elected Queen of Idiot America by acclamation (sorry Michele Bachman and Ann Coulter). Meanwhile Beck seems to be increasing his lead over Limbaugh for the position of King.

What is even more interesting about the Palin phenomenom is how willfully ignorant her supporters are. Sheep normally eat grass but in Palin Pasturers they are fed on pure BS and seem to thrive on it.

The world that Palin and her sheep inhabit is like Bizarro land from the old Superman comics where everything is backwards. In normal countries the citizens elect the best and the brightest to lead them. In Palin Land 'dumb and dumber' are the criteria for leadership.