Another Week of Lies and Spin in the Bush Oligarchy 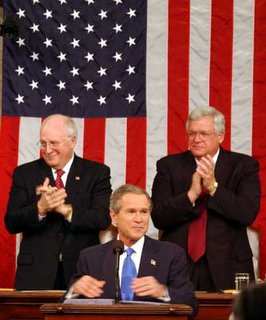 The Bush spin machine was on overdrive this week, spreading more of its oligarchic gospel. Spreading more lies and deception, that is. And the Republican-controlled Congress lent its usual helping hand. Let's recap, in no special order, some of the more notable accomplishments this week in the Kingdom of Corruption and Cronyism:

Iraq: Despite mounting Sunni unrest which resulted in 66 Iraqi deaths and 100+ injuries from suicide bombings; despite mounting tensions and a possible splintering among the Shiites; despite the kidnapping of a Westerner; Defense Secretary Rumsfeld continued to sound the "progress" drum, even blaming the media for focusing too much on the negative news coming out of Iraq. Rummy also denied any senior Pentagon knowledge of the pay-for-news propaganda campaign.

War on Terror: The Bushies received an overall failing report card from the 911 Commission regarding protecting the nation against acts of terror. There were 17 F's and D's.

Pre-War Intelligence: The House GOP did its best to defeat the Democrats' request for White House documents concerning pre-war intelligence on Iraq's WMD. The Committee on International Relations vote ended in a 24-24 tie. For an administration that claims to have done everything by the book, it sure has a hard time allowing a public review of these actions. Democrat Gary Ackerman (NY) referred to "the president that lied" and "the lying administration." He was quickly rebuked by Chairman Henry Hyde (R-IL), who read Ackerman's October 2002 remarks before voting to authorize Bush to use force: "We cannot simply hope that U.N. inspections will rout out Saddam Hussein's weapons of terror." Can you believe the arrogance of the Bushies? First they lie to Congress to get its support for the war, and then criticize these same lawmakers three years later for having trusted them on the pre-war intel.

Joe Lieberman: Congratulations to the Bushies for brainwashing the new Zell Miller, who's been sounding more pro-war than anyone in the White House these days.

Donald Rumsfeld: Asserted that he has no plans to take an early retirement. And why should he? He has the full support of the president, and besides, the war's going so well.

Torture: Despite loads of evidence to the contrary, including serious, multiple human rights violations at Abu Ghraib and Guantanamo, Secretary of State Rice declared "the United States does not permit, tolerate or condone torture under any circumstances." There. She said it, so it must be true.

Howard Dean: Vilified once again by the Bushies and the GOP for having the nerve to say we can't win the war in Iraq, even though everything leading up to this point, and history (can you say "Vietnam?"), are proving him more prescient than not. They can say what they want about Dean, but the simple fact is, unlike the Bushies, when it comes to the war he obviously knows what he's talking about.

USA Patriot Act: The Bushies saw House and Senate negotiators reach a "compromise" on an extension of its signature anti-terrorism law, but even Republicans like Sen. Arlen Specter (PA) say it falls way short of safeguarding civil liberties. A bi-partisan group of six Senators also denounced the compromise and said they were "gravely disappointed." Oh, and by the way, the deal drew lots of praise from Mr. Torture himself, Attorney General Alberto Gonzalez, who said the "comprehensive" bill should be passed quickly. What a surprise.

Air Marshals' Shooting: Two Miami marshals unloaded six bullets into American citizen and suspected bomber Rigoberto Alpizar as he ran off a plane into the jetway. No gun. No knife. No bomb. A little bit of an overreaction, perhaps? Hey, ya know what they say about the Patriot Act..."if you don't use it, ya lose it."

The Economy: Listening to Bush, one would believe the robust growth and prosperity of the 1990's is here once again, despite record gas and oil prices; record trade and budget deficits; rising interest rates; rising inflation; rising health-care costs; stagnant wages; weak job growth; declining consumer confidence; declining retail sales; and airline, steel and manufacturing bankruptcies. "The best days are yet to come for the American economy," Bush said. On that we couldn't agree more. But how long will we have to wait, and how much more fiscal damage will the Bushies do before then?

Tax Cuts: Thumbing its nose at future increases in the already historically high deficit, House Republicans decided that the nation's wealthiest Americans need another $95 billion in tax cuts even if at the expense of programs that help the poor: student loans, food stamps, child support, etc. Nothing like a little fiscal irresponsibility, I say. And Bush has expressed an intention to veto any bill that includes a provision to levy a $5 billion windfall profit tax on major oil companies, as well as one that calls for a penalty on tax-shelter abusers. Nothing like taking care of your own, I guess.

Dick Cheney's Defense of Tom DeLay: Despite embattled former House Majority Leader Tom Delay (TX) being one of the most crooked, unethical pol's to hit Washington in decades, VP Cheney managed to find his way to a Houston fundraiser and serve as the keynote in support of the little thief. Nothing like sticking to your guns on "restoring honor and integrity to the White House."

Post-Katrina Clean-up: As the NY Times' Paul Krugman wrote Friday, Bush has been woefully delinquent in living up to his post-hurricane promise to make the Gulf clean-up "one of the largest reconstruction efforts the world has ever seen." This guy makes Pinochio seem downright honest.

Lastly, I thought it fitting to end on yet another little piece of Republican hypocrisy: the outing of former Spokane, WA Mayor Jim West--one of the state's most conservative, anti-gay Republicans--for using his city computer to troll chat rooms in search of high-school-aged males to have sex with. The disgraced mayor was ousted this week in a rare recall election. Our naughty little internet surfer has a history of aggressive opposition to gay rights. When will these glass-house dwelling Republicans learn to stop throwing stones?
Posted by The Ostroy Report at 10:02 PM

Great summary, now we need a watch on the Troops coming home.

We will hear about this for the next 12 months until another fraudulent election is concluded and then things will stay as they are.. After all the Saudi 9/11 attack shows us that we cannot rely on them for a permanent and controlled supply of oil, so we need control in Iraq.

With a tip of the hat to Groucho: "Who are you going to believe? bush&co. or your own eyes?"
I swear to God if the 06' elections don't provide some results I'll swim to another country if I have to and renounce my citizenship.
To support bush&co. at this point you have to be one of three things. 1) mis-informed, which can be helped, 2) stupid, which can't or 3) a fascist, which makes you the mortal enemy of all that's supposed to be American.

And don't forget the FCC and Mr. Martin extorting the two major cable providers in America (it's interesting how Bush administration officials can talk out of both sides of their mouth at the same time):

"The United States is a culturally diverse country and a vigorous proponent of cultural diversity, which is based on individuals' freedom to choose how to express themselves and how to interact with others," the State Department says. "Governments deciding what citizens can read, hear, or see denies individuals the opportunity to make independent choices about what they value."
---------------
Individuals? Freedom? Independent choices? Governments deciding?
---------------
And then I read an article the other day about how the FCC Chairman, Mr. Martin, is literally extorting the two major cable providers in America in his ongoing and obsessive religious fundamentalist campaign to force cable channels to look more like broadcast channels. That is, Mr. Martin is demanding that the pay-per-view cable television tier be less risque and more acceptable to him and his religious fundamentalist jihadist backers.

So, I'm hearing about one position supposedly held by the Bush administration, while another part of the administration is doing the exact opposite. Sounds like their tortured position over "torture".

If ever the cable television pay-per-view tier starts to even remotely look like the broadcast channels, I will drop my movie channel subscription immediately. Hey, if I start seeing on those upper digital channels what I can just as easily see on the lower broadcast channels, then why would I waste my money.

This is what I believe has the cable providers running scared. They are caught between orthodox religious nuts who want to force all U.S. citizens to bow down to their Taliban-like, Communist Red Chinese-like media censorship...and subscribers like myself who actually believe diversity in all of our media is a sign of a vigorous and healthy democracy.

In other words, Mr. Martin looks to me like a neo-Taliban or neo-Communist sympathizer based on his actions. And yet, the term that unites these seemingly disparate factions is the word "conservative." And he is slated to remain chairman until 2009. By the end of his term we will have stopped being a pluralistic democracy and instead will look like any other dogmatic, theocratic police state.