The Bushies' Lie About the Islamic 'Caliphate' Threat 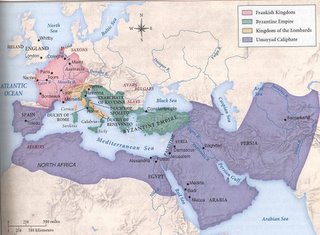 To most scholars of Western civilization, the re-establishment of an 'Islamic caliphate' would have calamitous consequences, essentially ushering in a return of seventh-century type radical fundamentalist Islamic domination over the Muslim world. The sort of rule associated with the Wahabist movement and sought by such violent regimes as the Afghanistan Taliban and terror organizations such as Al Qaeda. It reigned for over 500 years and spanned the Middle East, spread to Southwest Asia, North Africa and Spain. Needless to say, as a potential political weapon, throwing the term 'caliphate' around is akin to making unfounded threats about WMD and mushroom clouds. Which is exactly what the Bush administration is now doing in its desperate attempts to once again justify its colossal military blunder in Iraq.

As the NY Times reported this week, the caliphate bomb has been dropped repeatedly in speeches by various members of the Bush war cabal including Defense Secretary Donald Rumsfeld; Eric S. Edelman, the under secretary of defense for policy; Stephen J. Hadley, the national security adviser; Gen. John P. Abizaid, the top American commander in the Middle East; and VP Dick Cheney. And while Bush himself has not actually used the term caliphate, he's essentially described it last week when declaring that the terrorists are seeking to establish "a totalitarian Islamic empire that reaches from Indonesia to Spain."

Cheney on Al Qaeda: "They talk about wanting to re-establish what you could refer to as the seventh-century caliphate...governed by Sharia law, the most rigid interpretation of the Koran."

Rumsfeld: "Iraq would serve as the base of a new Islamic caliphate to extend throughout the Middle East, and which would threaten legitimate governments in Europe, Africa and Asia."

Gen. Abizaid: "They will try to re-establish a caliphate throughout the entire Muslim world." He's also told the House Armed Services Committee in September that the caliphate's goals include the destruction of Israel. "Just as we had the opportunity to learn what the Nazis were going to do, from Hitler's world in 'Mein Kampf,' we need to learn what these people intend to do from their own words."

This sort of gloom and doom spinning is both irresponsible and reprehensible, and as usual, is right out of the Rovian playbook. But the Bushies' number-one Weapon of Mass Deception has always been truth-stretching and exaggerated threats. While re-establishing a caliphate is certainly a priority of Islamic radicals, there's virtually no chance of it ever happening, according to scholars and government foreign policy experts. There is a difference, they say, between the attacks that small bands of terrorists commit around the world and achieving large-scale global domination.

"It is certainly correct to say that these people have a global design, but the administration ought to frame it realistically," said John L. Esposito, an Islamic studies professor at Georgetown University and founding director of the Center for Muslim-Christian Understanding. "Otherwise they can actually be playing into the hands of the Osama bin Ladens of the world because they raise this to a threat that is exponentially beyond anything that Osama bin Laden can deliver."

And Shibley Telhami, the Anwar Sadat professor for peace and development at the University of Maryland, scoffed at the notion of an Al Qaeda-based worldwide Muslim domination. "There's no chance in the world that they'll succeed. It's a silly threat." He cited a recent Zogby poll of 3,900 people in six Arab countries which found just 6% supported Al Qaeda's goal of creating an Islamic state.

Reality and facts. You can bet neither will preclude the Bushies from further sounding the caliphate alarm.
Posted by The Ostroy Report at 11:12 AM

It's funny that the Thugs are using this piece of ancient history to scare people about al Qeada. Unifying all Arabs and restoring the Califate was Saddam's great dream.

BUSH AND HIS ILK MAKE ME SICK. HOW THE VOTERS COULD HAVE BEEN FOOLED BY THIS GROUP OF THUGS IS BEYOND ME. WE WILL PAY FOR THIS FOR THE REST OF MY LIFE.

The leaders of the Bloods and the Crips gangs also are violent madmen who cannot be reasoned with, or who can be negotiated with by law enforcement. That does not mean that Rumsfeld and Cheney should tell us America's future is threatened by "Crips & Bloods domination." Man, is there ANYTHING this crooked administration can do to anger you Republicans?


These lying bastards have been wrong on everything to this point what makes you think their RIGHT now? Oh that's right you heard it on FOX NEWS

Please,..... please!!! one of you reporters ask the pres the question; "Explain the difference between a Shia, and a Sunni"? Without a scripted, rehearsed teleprompter answer.... I think all know we get the deer in the headlights stare.

These guys are trying to scare us about all these "threats", and there probably are some,..... but this bunch are not the ones we want to follow for strategy/tactics. We witnessed their capacity. They can't even handle doing hurricane relief; the same people are making decisions in a "war" they started in Iraq.

It is a shame you couldn't read the headlines for July 1, 2006 and know what Osama was going to say in his latest communication. It is OBL that uses the term Islamic Caliphate, not GWB. This statement, which is on record...actually tape, makes your previous blog look you are uninformed to what the Islamic militants are really thinking. I'm afraid OBL has proven you wrong.