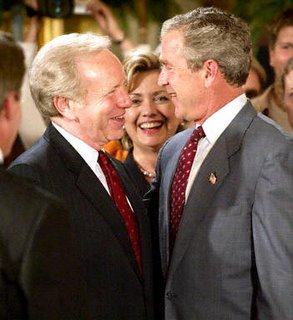 Sen. Joe "Zell" Lieberman, the delusional Democratic hawk from Connecticut, has confidently walked up to the political roulette wheel and placed all his chips on the ever-fraying coattails of our historically unpopular president. In emphatically supporting the Bushies' dreadful Iraq military policy, he must be thinking this will either curry him favor with this bankrupt administration and/or with hardline voters next November. To the contrary, as the NY Times reported over the weekend, members of his own party are growing increasingly frustrated and angry with Lieberman. The backlash from his home-state constituents could soon follow.

To begin with, let's look at the likelihood of Lieberman amassing any real political capital from the White House as payback for his inexplicable support of what almost everyone else in D.C., as well as a majority of Americans, deems a colossal military failure. As they did with Zell Miller, they'll showcase his self-loathing Democratic tirades in the near-term until they don't need him anymore, or until he implodes, whichever comes first. Case in point: where are Miller's GOP friends today? After a near psychotic meltdown at the Republican convention this Summer, Miller became the butt of late-night TV jokedom, and a political pariah. With his impassioned support of the unpopular war and his risky embracing of the Bushies, Lieberman could soon face a similar fate.

But for now, the love affair is a two-way street. The Bushies have welcomed Lieberman into their dangerous cult with open arms. The president, vp Cheney, and Defense Secretary Rumsfeld have publicly praised him in recent speeches.

"He is entirely correct," Cheney said. "On this, both Republicans and Democrats should be able to agree. The only way the terrorists can win is if we lose our nerve and abandon our mission."

However, this unyielding public support of the Iraq war coupled with his Bush-like morphing of Al Qaeda, terrorism and the Iraqi insurgency, has aroused the ire of key Democrats such as House Minority Leader Nancy Pelosi (CA) and Senate Minority Leader Harry Reid (NV). He's quickly becoming an outcast in his own party over these radical views.

As for whether or not he's alienating himself from the voters back home in Connecticut, it's probably unwise for any Democrat to think that an endorsement from Bush, Cheney and Rummy, especially when it comes to the war, will score them any points at the polls. Why Lieberman fails to recognize this shows just how out of touch he is with reality.

He's at the Roulette wheel, alright. The Russian kind.
Posted by The Ostroy Report at 8:35 PM

I just don't get Lieberman. What does he have to gain from supporting Bush? If he feels so inclined, he should just switch parties. Then Connecticut can figure it out.

Joezelle's purpose for this... he's going to run for Prez again and hope he can yank some Republican backing with him. Fool.

I live in CT. Joe is a risk to our nation. By supporting the criminal and moraly bankrupt Neo_Cons he endangers the future of our nation. I am education people (voters) that we need to evict not only Joe but any Democrat who does not speak out against the illegal war, Rethug corruption/cronyism at all levels, In 2006 We The People will remove any centrist waffling Dems from office. The only people worthy of your vote are anti-war anti industrial military complex. We need to tend to OUR people by stop lying to them and stop feeding them to the War machine of Imperial conquest.

This also holds true for McCain and his love of war and love of Bush. This will come back to haunt these people in 2006 and 2008 and that you can take to the bank. My wife keeps thinking Hillary will be the next president but her thoughts are changing with Hillary’s interest in flag burning and her stance on this invasion. It was said that this election is Hillary’s to loose and so far she’s on the “L” track.

This invasion hasn’t even begun yet, wait until the insurgents start using their really big weapons and start killing hundreds at a time rather then the 20 and 30’s. Reducing our troops by 20 or 30 thousand will only make it easier for them to kill more of our people and then the Schlitz will hit the fan. One more year of this killing and the uproar of the American people will make the protests of the 60’s and early 70’s seem like a picnic in the park.

If the Democrats keep sitting back and watching the world go by they too will be switched to the “L” track. I don’t see any pro-war candidate winning in 2006 or 2008 because by then anyone that was for this mess will prove that they had poor judgment then and what’s to say it would improve once in higher office.

Keep an eye on Gore and Dean.

Hapless Joe is getting on a train that already shows signs of derailing. If he actually does replace Rummy @ DoD, we will finally be rid of him. My best guess is that Cheney and Rove want a Democrat that they can dump this mess on and Joe has been bent over so long, he hardly feels it when they slip it to him. There is a sense that his exposure to the big time, the VP run, infected him and he hasn't recovered.
I live in CT, (maybe the last) of a long line of Dems, but I'm disgusted by the craven hacks that control our party here in the state and in DC. The power of money in politics has replaced the voters as contituency with the Corporations that, for the time being, employ those voters. Joe has long been the senator for the Financial/Insurance industry and the Armaments companies, along with Dodd. And the CTDemParty is so beholden to Corporate interests that, unless something massive changes, there will be no primary challenge to Loserman.
There's a related mess in CT2, House district for Eastern CT is currently occupied by one of Tom DeLay's laundry workers, Rob Simmons. The CT Party has decided, six months before the primary, that Joe Courtney IS the Democratic nominee, despite the fact that Simmons has beaten him before, despite the fact that there is a dynamic young guy, James Patton, who was set to contest the seat. Courtney is a mini-me of Hapless Joe, shorter and funnier looking and so far, I haven't been able to get a straight answer from him on his position on the war.
This week, the Mansfield (CT) Democratic Town Committee has brought up and will pass a resolution criticizing Lieberman. Is this the first sign of life returning to the comatose majority in the Nutmeg State? We can hope.
Like anonymous above, I can not support anyone that voted for this war.
Nationally, polls show opposition to the war to be as high as 64%, Connecticut was one of the Bluest of Blue States, the rank&file of CT's Dems are firmly opposed to the continued occupation of Iraq. For our Senators to continue to support it amounts to misrepresentation. For candidates to not have a clear statement of opposition is inexcusable.
Peace
CV

Lieberman is completely off the hook when it comes to Bush's Iraq war.

An examination of his senate voting record shows a man who is, while not exactly a conservative Democratic, at least a centerist on many issues.

Many attribute Lieberman's enthusiasm for toppling Saddam to his concern over the safety of Israel. Others say his hawkishness is a lead up to the 2008 presidential race. A few think he's just a shameless politician with his finger in the air checking the direction of the wind.

All I know is I intend to throw my support behind anyone who opposes his reelection to the senate. If it's Lowell Weicker, fine. Lieberman has lost my support.
.

Joe is a neo-con, pure and simple. He is tool of corporations, as are most politicians. However, the religious card may be far scarier. More Muslims become hatred-filled enemies and suicide bombers when all hope is lost, e.g., Palestinians. With Iraq war and Cheney/Rumsfeld torture, this is happening full-blast. New Iran president is threatening holy war and Iraq could become Islam-run country. In US, right-wing "Christian" wingnuts run much of party - e.g., Tom DeLay, James Dobson, Pat Robertson, John Ashcroft & Bush himself. Many of them actually believe in Armageddon to hasten return of Christ. Neo-cons in power include Scooter Libby, John Bolton, Richard Perle, Paul Wolfowitz, Douglas Feith, Ari Fleischer, Ken Mehlman, David Frum, Michael Chertoff and Elliott Abrams. Prominent water-carriers include Jack Abramoff, Judith Miller, Charles Krauthammer, and possibly Henry Kissinger, Alan Greenspan & Lieberman. Is this an anti-Semitic diatribe. Nothing can be further from the truth - I'm a Jew, and studied the Holocaust for a school research project. According to several far-right Christian wingnuts, for Armageddon to be achieved would require sacrifice of Jews - think "Passion of the Christ". Although Jewish, I also belonged to Congregational Church and strongly believe in message of Christ, which is antithesis of Pat Robertson's message. Adding 2 + 2 together leads to a very scary potential scenario which is high-stakes Russian roulette, and the basis of an intriguing Robert Ludlum type novel, but this is reality folks. Will a nightmare scenario happen - hopefully not; it's far more likely than a Condi-evoked Saddam-created mushroom cloud however. This is the scary tale of the seizing of power by a cadre of the worst sadistic sociopathic creatures this country has to offer. Being a former resident of Connecticut and fan of Joementum, I feel very sad in having to say Joe Lieberman seems to be part of this ugly brew. He must be removed.