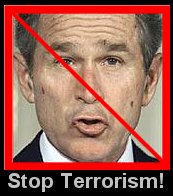 For weeks, President Bush declared he would not accept a short-term extension of the Patriot Act. Then in a bi-partisan manner last week, prompted by the startling front-page news that Bush repeatedly authorized illegal NSA spying on Americans domestically, the Senate filibustered to prevent the legislation from being renewed. The Senate pushed for an extension, allowing lawmakers time to negotiate stricter civil liberties protections, but the Bushies rejected, and instead went on the PR warpath against Senate Minority Leader Harry Reid (NV), Sen. Hillary Clinton (NY) and House Minority Leader Nancy Pelosi (CA).

But Wednesday Bush backpedaled, as he's had to do so many times lately (Harriet Miers, McCain/torture, war mistakes). He blasted the Democratic leadership, choosing to deceive Americans yet again by ignoring the fact that this was a bi-partisan action.

"I appreciate the Senate for working to keep the existing Patriot Act in law through next July, despite boasts last week by the Democratic leader that he had blocked the Act," Bush said in a statement. "No one should be allowed to block the Patriot Act to score political points, and I am grateful the Senate rejected that approach."

But what's most appalling here is the fact that Bush has politicized this issue more than anyone, as evidenced by the above statement. The filibuster, and now the extension, is not about politics, at least to the Democrats. It's about stripping this president of the unlimited, unchecked power that the Busheviks so crave, and worse, have abused. It's about protecting Americans and foreigners from the political tyranny of this White House, which has co-opted the 9-11 tragedy to further its power/war-mongering self-interests.

Even as the Senate voted to literally save his ass on this issue, Bush hammered home the scare tactics and propaganda: "The senators obstructing the Patriot Act need to understand that the expiration of this vital law will endanger America and will leave us in a weaker position in the fight against brutal killers." The last time Bush peddled this extremist rhetoric we invaded a sovereign nation and killed tens of thousands of people, including 2100+ U.S. soldiers. And the killing continues.
Posted by The Ostroy Report at 10:46 AM

Absolutely true! He tells us ahead what he is planning, by doing exactly the oposite of what he says... we should know this by now. What is really scarey is that Goss just announced that we are ready to strike Syria/Iran in Turkish press. Another 'redeployment' of the troops annouced by pentagon. Leaving Iraq? I worry that they will just be brought out of Iraq to go to Iran or Syria instead. Fool me once, shame on you. Fool me twice, shame on me.

I really think that Bush has reached the end of his Neo Con adventures. He may believe that CRAp, but Joe Trailer Park SCHMUCK in nowhere GA. sees that all the flag waving and war in Iraq has brought us nothing, but American dead and $ 4 Billion a month tab and Iraq on the brink of Religious Civil War.

If Bush wants anymore wars there will have to be a draft. There is no way that the YUPPIE/Republicans that support Bush will allow him to draft their sons and daughters for cannon fodder for another Neo Con MISADVENTURE. It’s always easier to support a war when it is others i.e. the lower classes that are doing the fighting and dieing. When it comes to war Americans are good coming out of the gate, but if it drags on and there is blood for the long term they go GUTLESS.

thank you mr. president...thank you for everything!!!!