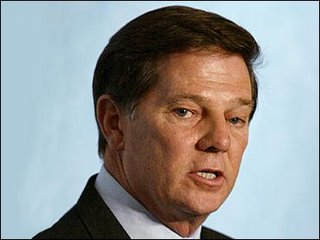 Coming off his Monday night fundraiser with VP Dick Cheney, and just a day after a Texas judge upheld two of the three charges against him, embattled former House Majority Leader Tom DeLay's poll numbers have dropped to their lowest levels yet.

In a brand new poll of DeLay's District 22 constituents, USA Today/Gallup asked voters: In the 2006 midterm election, are you more likely to vote to re-elect DeLay or vote for the Democratic Party's candidate for Congress?

It is worthy to note that DeLay was re-elected to Congress last year by a 55%-41% margin.

As for DeLay's new approval numbers:

Voters were also asked about the DeLay indictments, and whether they believe the charges are true:

Needless to say, DeLay continues to be in big trouble, facing mounting pressure and challenges from the House Ethics Committee and the judicial system. And now in his hometown, voters are increasingly voicing their disapproval of him as well. He is extremely vulnerable, giving Democratic challenger Nick Lampson a real opportunity to pull out a victory next year.
Posted by The Ostroy Report at 3:04 PM

So many districts are drawn to favor the Repubs, let's hope his isn't one of them.

That's how the game is played. The party in power makes sure the district lines are drawn to favor them. There are very few districts in play in 2006 because of this process.

Cathy,
Sorry to tell ya, but those GOP bastards started their Gerimandering there first , when the Chimp and Rove were down there.

Also, if you have ever been to TX you'll find that they’re not the brightest bulbs in the box. Yep, the farther south you go the lower the IQ gets. THis jackass,ie Delay is one of the most evil of the bunch..don't count him out yet.

Hey! One of the cofounders of Code Pink donated $50. to get into the Delay fundraiser. She pulled aside her velvet wrap and let Cheney have it. (verbally, that is) She was hauled off. How come the media aren't covering THAT one? They weren't allowed at the fundraiser.

Is it possible that Delay is not worried because they have paperless ballots down there?
I don't know the answer to that, I'm just speculating. After all, Ohio has already proved that exit polls don't matter.

My brother works for a certain unnamed federal agency and many of his co-workers and he feel that we should let Texas become a "sovereign nation" and let Georgie-Porgie-Puddin-n-Pie become Emperor.

This way all the corruption from there can stay there. They can let in all the migrants they want and keep their ten-gallon hats.

THANK YOU GOP,MR. PRESIDENT AND ALL GOP PUNDITS...THANK YOU FOR EVERYTHING!!!!

and what doe's it profit a man to have gained the whole world, and to have lost his soul

laugh about it, talk about, what you got to choose, any way you look at it you lose.
What's that you say Ms. Robinson
Jolting Joe has left and gone away
HEY HEY HEY