Democrats Can Win in '06 on an Anti-Corruption Message. Here's Our top 15 GOP Scandals to Remind Voters 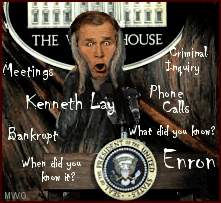 No matter how bad it gets for Republicans; no matter how blatantly corrupt they've become; no matter how miserably they seem to fail at almost every turn, their main rallying cry is that the Democrats are no better because they don't have a solid, unified platform. Well, I think the Democrats have a sure-fire winner in playing the morality card. Let's drill it home to America that the Busheviks are the most unethical, corrupt administration in modern history.

In an effort to win back the House in 2006, let's remind Americans of the Bushies' 2000 campaign promise "to restore honesty and integrity" to Washington, and of all the moral and ethical transgressions and criminal behavior that followed instead. We can relentlessly remind voters of the various scandals that have rocked and socked the GOP, including:

And keep in mind, this is just the short list. Kind of makes Bill Clinton's lapses in Oval Office morality seem quite benign by comparison, no?
Posted by The Ostroy Report at 7:42 PM

I am going to borrow your crib-notes on this.

I absolutely feel we are in the position to change the direction of the agenda, if we can keep the pressure up on the media.

If they believe there is money to be made in reporting to our side, then they will shift the agenda and help to motivate the base attack.

We have to take back this country from the "Left Behind" majority. They just can't all be that stupid...Can they?

Andy,
You neglected to mention the impending jack abramoff related indictments that will be coming down soon, most of which will ensnare the GOP...just in time for 06.

In regards to #15... Scott McClellan said "This is still a highly classified program, and there are details that it's important not be disclosed"

Which means... we aren't telling anyone sh*t and aren't going to be held accountable.

I'm amazed so few Republicans (I think 3 I can recollect) have said anything in opposition to this.

If there were serious concerns about citizens and their overseas conversations I think many judges would have accepted a resonable request to snoop on them...

Excellent list my friend. My short list of impeachable Bush offenses are:
1. Using false intelligence to unjustly and illegally invade Iraq.
2. Leaking a CIA operative's name in retaliation for her husband calling Bush on one of his lies.
3. Executive authorization of torture in Abu Ghraib.
4. Illegally spying on Americans within the United States.

I think any Democratic Contract with America should include advocacy of a Constitutional amendment barring any more descendants of Prescott Bush assuming the office of the Presidency.