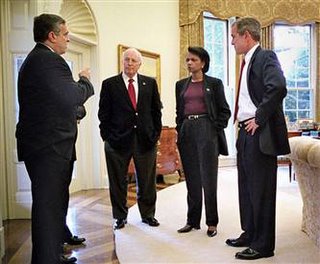 Here's the scenario: our over-zealous, corrupt president flicks the switch some three-dozen times since 2001, authorizing the National Security Agency to use illegal wiretaps and other surveillance tactics on American citizens to supposedly intercept terrorist chatter and protect the nation from acts of terrorism. And when news of this flagrant violation of Congressional law finds its way to the front pages, as it did Dec. 16 in the NY Times, Bush's ire is raised and a special prosecutor is soon named to investigate the leak. Why? Because as we all know, Bush hates leaks and the leakers who leak them. Except of course when they're card-carrying Busheviks, in which case leaks are just fine. The hypocrisy is mind-blowing.

As reported in the Times Saturday, the Justice Department announced Friday that it had opened a criminal investigation into the leak about Bush's secret eavesdropping scheme. Incredulously, the DOJ finds it more appropriate to legally pursue the whistle-blowers than those who may have committed the original crime.

And further, where is Bush's outrage over his administration's reprehensible leaking of classified information in the form of covert CIA operative Valerie Plame's identity back in 2003? How is it that Karl Rove is still allowed to stink up the halls of the White House given his boss's disdain for leakers?

Like everything else in this administration, it's "do as I say, not as I do." The hypocrisy is not only incredible, it's downright disgusting, especially when it involves breaching the safety of covert agents and the rights and civil liberties of American citizens everywhere.
Posted by The Ostroy Report at 5:44 PM

The sheer arrogance of this administration knows no bounds.

Bush with this flagrant flouting of the constitution has officially crowned himself KING and with his own brand of Gestapo (i.e. the right wing media and the associated Rove ran Republican Attack Machine) will stop at nothing to silence, smear, tear down and ruin his critics and the last Americans that realize that this is a country founded and based on laws that NO ONE is above.

Rest assured that with no amount of reassuring, BUSHCO has probably used this unfettered and unregulated surveillance of communications to monitor anyone that has an axe to grind against this administration and is on Bush’s version of THE WHITE HOUSE ENEMIES list.

Call me paranoid if you will, but just look at what has happened to anyone that has stood up publicly against these guys? What else should we expect from an administration that says “YOUR EITHER WITH US OR AGAINST US”???

The White House knew about the leak for over a year given they requested and received a delay in publication by the NYT and did not consider an investigation warranted until their illegal surveillance was exposed. One has to question whether they considered the leak as detrimental to national security if they did not attempt to identify the "leaker" for well over a year. More likely, now that the program is exposed, they want to intimidate any other whistle blowers and to limit further damaging revelations.

As Karl Rove was qouted in Bush's Brain, "if their talking about it their losing". In this case Bush is feeling the heat already. Just wait until the congressional hearings start.

There is no excuse for this.

Proper Gander is all they have left!

Brain Wash everybody into Believing that it is:
For their own good!

Bushzarro and The Corporate Thieves!
Stealing the eyes right out of the head of;
God.

The Fauxtian Taliban
&
The Corporate Alquada must be stopped!
Before they destroy the world.

We will only be safe after we blast this:
Evil Spawn!
The Bush-Zarro Resident
&
Dick The Heartless!
Back into:
Outer Space!

Well said. I read that he did this so that he can get out of answering questions due to the "ongoing criminal investigation." He is sending his warning shots to the media and I find this disgusting. They have played ball with him for too long and he is going to make sure they continue to do so.

As John Ringling said, "There's a SUCK born every minute" and that speaks well for the ones that follow Bush.