Will Al Gore Run? Meet The Press Doesn't Think So; Fails to Make Their Top '08 List 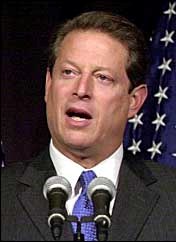 Sure, Gore's previously stated he's not running, but he's not the only Democrat or Republican to play it coy. Can it be that the mainstream media still have it out for Al? How can Russert not mention Gore's name even as a dark horse or possible draft candidate? There's certainly been enough speculation over the past year about a Gore candidacy that would warrant inclusion at least as a real potential entry.

As we've said several times in this blog, Gore stands as good a chance as any based on his proven electibility (he did win the popular vote); his firm anti-war position from the get-go; his unrivaled 20+ year environmental leadership; his stewardship with Bill Clinton over 7 years of unprecedented economic prosperity; and his skeleton-less closet (he's already been vetted several times). He's the comeback kid; the New Nixon. And he's more viable in our opinion than those that Russert mentioned, including, yes, Hillary. Only Warner has the makings of a candidate who could achieve some broad national crossover appeal.

We're sticking to our guns here. Al Gore will run in 2008. Even if Meet the Press doesn't think so.
Posted by The Ostroy Report at 5:32 PM

He's already been elected once. Let's hope he gets the chance to serve.

Andy,
Happy New Year!
I am afraid Gore has been marginalized by the media and villified by the right wing to the point that he probably stands little chance of the nomination, much less of actually becoming president.
I think he is feared by the right and therefore will be viciously attacked as campaign time draws nigh.
Another feared and villified by the right, Henry Cisneros, is still being investigated by the JD, at a cost to the taxpayers of millions of dollars. Why is this? They fear him also. He would be a powerful candidate as a Texas Hispanic with a very successful track record as mayor of San Antonio and a good tour of duty in the Clinton Administration as Secretary of HEW. (Is that right?)
The Republicans are weakened by scandal, incompetence, the war and their sheer, blind power lust but that doesn't mean the Dems will win automatically. It will not be so easy, I'm afraid.

I'm your biggest fan but I continue to disagree on your support of Al Gore. He's not a leader.

I felt co-opted- and terribly let down by John Kerry; I like the direction Gore has moved in since leaving office.

Ultimately, the PEOPLE will lead; the candidates will follow a NEW POPULAR and DEMOCRATIC WIll.

Sure, Gore might not run, but I wouldn't rule him out.

Holding back your intention is a classic way of undercutting a slate (if your real intention is to run). It's likely that Gore's camp was consulted about Sunday's show and adamantly stated a "not running" position. Smart if you ask me. It's too early in the game to put yourself out there. You risk both peaking too early (Dean), or being brought down by members of your own party. Primaries are painful that way. The infighting prior to nomination weakens the party unity you need to win.

Personally, I wouldn't vote for any of that lot; they're all DLCers, which means they belong in the Republican Party.

As for Al Gore, he may be a statesman, but he's a poor politician. On Jon Stewart's show, long after having "lost" the election, he was asked to clarify what might be called his platform. It was a chance to connect again. Instead, he started droning, yes droning, on and on about the lockbox. It was so lame that Stewart appeared to think he was joking, but he was not. With that, Stewart became almost compassionately polite, but clearly valedictorian. Too bad, but that's how it is. Gore doesn't get it.

I agree with mickey - Gore's last shot was abissmal at best, if he really does have any thoughts to trying again he better come out swinging in reality.

HAPPY NEW YEAR Andy and everyone,

I guess once you've been beat up you finally learn to fight and I think that is what happened to Al. Kerry never really got it in 2004, he underestimated Bush and his crime family, I know Al did in 2000 but for Kerry to do the same was a joke.

I don't see Hillary because of her stupid waste of time anticks with flag burning and kinda sorta backing the war. I think Richardson has a chance but I'm still going with either Gore/Dean or Dean/Gore. The country is going to be crying for progressive leadership by the end of next year.

mickey: do you recall the approximate timeframe for that Daily show appearance by Gore?

I too am a fan of this blog, but I find the Gore love a bit baffling. I have nothing against the man, but he's hardly fresh and exciting as a candidate. He couldn't beat the neocons the first time around...why would anything change this time? I think the American electorate (as dumb as it collectively is) is experiencing buyer's remorse and wants to dump the GOP as Supreme Rulers. However, I don't think that means that they necessarily want to go back in time to the Clinton era either (as much as I personally would like to).

To me, trotting out Gore says to the world "Bill, Hillary and Al. That's all we got."

I loved Al, I loved Kerry. But neither man could seal the deal, so it's time to move on.

karen gsteiger said...
I too am a fan of this blog, but I find the Gore love a bit baffling. I have nothing against the man, but he's hardly fresh and exciting as a candidate. He couldn't beat the neocons the first time around...why would anything change this time?

Karen, if the GOP in 1968 felt the way you did, tehir guy Nixon would not have one the next two elections (after being defeated by Kennedy in '60). The past is past is the past. Period. Today's Gore, in today's America and in today's world, is not the Gore of 2000. And neither is the all-mighty GOP. Gore is stronger, and the GOP has been badly weakened. And, let's not forget Gore DID win...the popular vote. And if not not for all kinds of corruption down in Florida (and elsewhere), he'd have been president, not MonkeyBoy. Times change, people change, political landscapes change. Just ask Nixon.

Mr. Gore is the man he is today, because he is a man who is free to speak his mind unencumbered by Party rules and expectations.
Put him back in the beltway and that won't wash. He would either have to conform, or sell his soul, and frankly, I don't believe he would do that and shouldn't have to. I don't understand why people don't get that.

Why can't this man do what he wishes to do to make this world a better place? If ultimately HE decides it is to run again, that will be his decision to make, but it will be very risky, especially if it is stolen again. It isn't as easy as some make it out to be. Right now he is doing some good things in regards to climate change, in being the Chairman of Current tv, and being involved in other endeavors. However, I don't see much support from those who are constantly calling for him to run regarding these endeavors, and that is frankly, disappointing.

Is a lobbyist group paying you to unconditionally endorse Al Gore? When you use Nixon as a success example you're digging pretty low...

Anonymous said...
Is a lobbyist group paying you to unconditionally endorse Al Gore? When you use Nixon as a success example you're digging pretty low...

Hmmm, let's see. Nixon loses in '60, comes back 8 years later and wins the next two presidential elections. Yeah, I see your point. There can be no possible parallels that could be drawn with Gore. What on earth was I thinking.

Come Out Come Out Wherever You Are Al.We need you now more than ever!

Proved wrong, Gore is not running, and thats the bottom line. His own party didnt let him in 2004 and didnt again in 2008, even if he didnt want to. I would love for Gore to run though because i konw then the Dems would lose