The Busheviks Once Again Skirt the Law; Dem's Must Demand an Independent Counsel in BribeGate 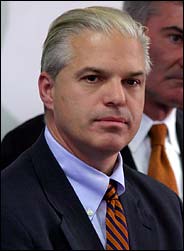 What does the Bush Administration do when it gets too hot in the judicial kitchen? It changes the chef. And that's precisely what it's done in the Jack Abramoff scandal. And the timing couldn't be anymore suspect.

Noel L. Hillman heads the Justice Department's public integrity division, and up until Thursday was the chief prosecutor in the investigation of the disgraced Republican lobbyist; an investigation that threatens to snake it's way from the steps of the Capital all the way up the White House Lawn. So it's no coincidence that President Bush decided that right now would be the best time to nominate Hillman for a federal judgeship, effectively pulling him off the hottest, most far-reaching political criminal investigation since Watergate, creating a critical setback for the prosecution.

Hillman was first considered for nomination to the bench a year ago. Nothing came of it. So why now? That's a question that really needn't be asked, does it? The Busheviks are blatantly corrupt, self-serving, arrogant monarchists hellbent on self-preservation. Their disregard for the law and consistent defiling of the Constitution is shameless and unprecedented. This new action must result in a demand by the Democrats for a special prosecutor to take over the case. The Busheveiks and their corrupt Justice Department, run by Alberto "Mr. Torture" Gonzales, can no longer be entrusted with America's legal well-being. It's the fox guarding the henhouse yet again.

Rep. George Miller (D-CA) called the timing "startling" and said, "You have one of the chief prosecutors removed from a case that has tentacles throughout the Republican leadership of Congress, throughout the various agencies and into the White House."

Bush's highly calculated chess move comes on the heels of the Democrats' demand for documents and photos involving the president and Abramoff, materials that could paint a very different picture of their relationship than the Bushies have claimed. To date, Bush has refused to provide same, saying there's no "there" there. And if pictures do exist, they say, then chalk it up to some simple holiday fun at White House Hanukkah parties.

They lie, they defy, they obstruct. Mazel Tov, America, we just took another pounding in the tush.
Posted by The Ostroy Report at 9:09 PM

What does it take to get the average American to become outraged and march on Washington if that's what it takes? Or when will a Democrat really step out and speak for thr rest of us; or, when will those Dems who are in power fight back? The moves are so transparent, so dangerous and harmful to us yet nobody does anything to stop them. It's become a way of life like the battered wife syndrome. Are the Dems trying to avoid confrontation, a la the battered wife syndrome, so the abusers perhaps won't abuse anymore? I see no signs of hope.

I ALSO FIND NO HOPE. THE IMPENDING CONFIRMATION OF ALITO IS THE FINAL NAIL IN THE COFFIN OF THE REPUBLIC. IT'S OVER FOLKS. WE'RE SCREWED.

I urge Noel Hillman to refuse this judicial nomination and continue with his prosecution.

THE TYRANNY OF GEORGE 43RD IS MUCH MORE HEINOUS THAN THAT OF GEORGE THE 3RD.

WE HAVE THE DOCUMENTS FOR A DEMOCRACY- THE BILL OF RIGHTS AND THE DECLARATION OF INDEPENDENCE:
WE ONLY NEED ACT UPON THEM.

AS ALWAYS, THE POTENTIAL SOVEREIGN IS "WE, THE PEOPLE"...THAT IS, YOU AND I.

I wish some one with more contacts than I would encourage the gentleman to decline. If he does his job where he is now, I am sure he will deserve a nomination from the next president and if it is a democratic then even better. The good of the country is his goal I would hope

Daily Kos has a post about the last time Abramoff was in trouble. In 2002, he was being investigated by a prosecutor in Guam over some scandal there. Bush fired the prosecutor.

WHEN WE ALLOW REICH-WING POLITIANS TO FORCE US TO CHOOSE OUR SECURITY OVER OUR CIVIL LIBERTIES, WE DESERVE NEITHER-! ! ! !

OUR SECURITY IS OUR 'CIVIL RIGHT' NOT THE OPPOSITE! ! !

If you decided to watch the PACK OF LIES that will be Bush's STATE OF THE UNION SPEECH and are not part of the BUSH/GOP FAITHFUL. Do the following to help you believe all the twisted truth and all that you will hear:

2) Ram your head into a wall repeatedly

3) Repeat the above until you believe the country is on the right track and we are winning in Iraq.

4) Once #3 is completed begin watching the FOX NEWS CHANNEL and cease all critical thought.

I am convinced that the American people as a whole are a bunch of stupid SHEEP!!!

Alito does have an agenda that being to overturn ROWvWADE , give Bush all the power he needs to insure his impending dictatorship and to get him and his admin off the hook for all their crimes in the end just like Bush 1 did by pardoning all the bastards that were involved in Iran Contra.

This whole thing with Abramoff, no matter the stalling tactics will not go away and the cluster in Iraq just gets worse. If the insurgency can get Bob Woodruff they can get anybody. Bush, if you really look at it is already a lame duck. The GOP in the congress are running for cover worried about their own asses in 06.

Now we hear the Bush back door draft continues with Army forcing 50,000 soldiers into extended duty.

This and all the bad news about job losses, lackluster economy and the slowing housing market will run counter to all the SLOP that Bush will try to peddle in the PACK OF LIES that is the State of the Union address. Even the dumbest southern Red stater will see there is a dissonance to the same old GOP message…but then again…maybe not…

As far as the Special Counsel ..don't count on it with the Republicans in power. The good thing is as they stonewall this they will look like real crooks with something to hide.

As far as the Pics of Bush and Abramoff..give it time..they'll come out. Some members of the media aren't playing ball with the GOP like they used to

In the case of Senator Frist, he re
minds me of those villains in those
old gay nineties plays if he only
had a black moustache, cape, and
hat. Only that was slapstick and
Frist is for real. We in Tennessee
have had no representation by him
since he took office. He is a total flop and disgrace. The people of Tennessee erred drastically in putting him into
office. Mildred P. Miller, Chatta-
noog, Tennessee