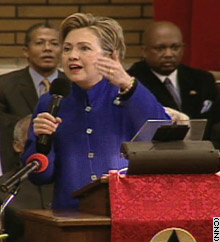 Since Monday, Republicans have been expressing their 'outrage' at N.Y. Sen. Hillary Clinton for what they claim was racial pandering during a rousing Martin Luther King Jr. commemoration speech at the Canaan Baptist Church of Christ in Harlem, where she spoke of the oppressive manner with which the GOP runs Congress:

"When you look at the way the House of Representatives has been run, it has been run like a plantation, and you know what I'm talking about. It has been run in a way so that nobody with a contrary view has had a chance to present legislation, to make an argument, to be heard."

The Republican Party, never known for its efforts to further the social, economic and civil rights causes of minorities, has self-righteously injected itself into this issue, accusing Clinton of playing the race card and decrying her poor judgment for making such statements on MLK day.

First off, the GOP fought long and hard against even having a federal MLK holiday, so who are they to tell anyone now how to celebrate it? Next, unless I was dreaming, I saw and heard thunderous applause to Hillary's comments from the congregation. By attacking Hillary, are Republicans committing the worst possible form of racism themselves by telling Blacks they're too ignorant to realize that they should be criticizing instead of applauding? It's incredulous to me, but is the GOP actually telling Blacks how Blacks should really feel about racism? Wow. What could be more racist than that?

If the GOP wants to be outraged, there's certainly enough corruption and criminality under their own roof to keep 'em busy for years. But that's precisely the point. Maybe they're not really that upset with Hill's plantation remark, but rather her succinct assessment of the Busheviks:

"We have a culture of corruption, we have cronyism, we have incompetence. I predict to you that this administration will go down in history as one of the worst that has ever governed our country."

The woman does have a point.
Posted by The Ostroy Report at 10:06 PM

Once again it's the media making something out of NOTHING. If ONLY they would do their job and report and investigate real news stories. CNN and FOX are the worst and I refuse to watch them except for Lou Dobbs which is the only hour I'll give them.

The Dems have got to start fighting back and until they do they will be "Swift boated" by the GOP.

I heard Hilary being exorciated by the right wing media and even others and lumped into the same category as Ray Nagin, Pat Robertson,Michael Brown and President Bush for making really dumb remarks. Oh the outrage, even Laura got into the act. One big problem, Hilary was telling the truth!

You said it Dicky, the truth hurts and that's the reason the Right (who really ARE wrong) and the media are blasting Hillary.

You just know when Laura has to get in the fight it's only because her old man can't put two words together to go against Hillary. If Hillary keeps growing a set of boobs and starts talking like a Liberal perhaps others will start listening to her. Everyone has said this is HER election to lose adn so far she's on the track of doing just that. Why is Bill not coming to her aid rather than sucking up to Bush 41?

If and that's a BIG IF, Hillary makes a turn around we could see a Gore/Clinton ticket but there are a lot of IF's between now and 2008.

The outrage is that Hillary is so used to being a "lite Republican" that she had to quote Newt Grinrich almost word for word even as she tried to represent the Democrats. When the Dems were in power Newt said it was is if they were running a plantation and the Republicans were slaves. (The clip of Newt making the speech was on a recent Keith Olbermann's COUNTDOWN)

How much more fake outrage can the right muster up? They manage to find themselves "outraged" every day.