Lampson Reacts to DeLay Resignation; Says GOP Dumped Him For Being Corrupt 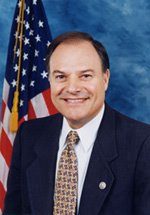 In the wake of Rep. Tom DeLay's resignation as House Majority Leader, the winds of change are blowing ever stronger down in his 22nd Congressional district in Southeast Texas. DeLay's challenger, Nick Lampson, who was edged out of his House seat in The Hammer's 2004 redistricting scheme, said the embattled legislator has finally begun to get what he deserves.

"Tom DeLay can no longer blame his troubles on a partisan witch hunt," Lampson stated. "He his not running for Majority Leader because members of his own Party were openly saying they would no longer tolerate his scandal and corruption. This proves once and for all that Tom DeLay is not the victim of a partisan witch hunt, but someone who has betrayed the trust of the American people. He had already lost Republicans here at home, and now he is losing the support of Republicans in Washington, DC. DeLay Inc. is no longer open for business, and that's a good thing for the people of Southeast Texas who have suffered enough embarrassment."

What seemed like a steep uphill climb for the Democrat Lampson just a few months ago now seems like a more than viable political opportunity. DeLay's lost his power seat, has largely been abandoned by the GOP, and has lost the support of the voters in his home district. He's still under criminal indictment, and will be going to trial shortly. His congressional seat is in serious jeopardy, and now Lampson's been given a better shot than ever to get back into the House.

Additionally, DeLay faces aggressive challenges from three Republican primary opponents, as well as a former Republican member of Congress who's planning to challenge him as an independent. So, who's got the steep climb now?
Posted by The Ostroy Report at 5:44 PM

Disgusting Delay Disgraces Us All

Let's get this straight, Delay is not being dumped because he is corrupt. He is being tossed because he in his arrogance was CAUGHT at being corrupt...period!