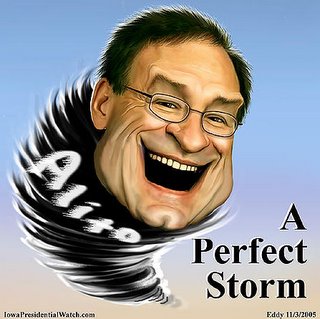 The Alito filibuster dust has settled, and right-wing talking heads are choking on their own glee. Some, like the NY Post's misguided Deborah Orin, claim Sen. John Kerry's failed bid to stop the Alito vote signifies much more than a failed filibuster. And while she's drunk on the Bush Kool-Aid, she's missing the real signs regarding today's political landscape.

In her Tuesday column, Suicide of the Dems: Kerry's Flopibuster, Orin fires her opening salvo: "THE joke in Republican circles now is that if John Kerry didn't exist, Karl Rove would have to invent him." And why wouldn't he. Rove's "invented" everything else he's needed over the years to get his clients elected, whether it's been concocted legally or not. She argues that Rove's been handed yet another Democratic faux pax he can milk dry in 2008.

Regarding the filibuster attempt, Orin's whole premise is that by only obtaining the support of 24 other Democratic Senators, Kerry failed and failed big (72-25). That he, Al Gore, Sen. Hillary Clinton, Howard Dean and others continue swinging far to the left, the angry left as she calls it, and are thus further alienating themselves from the sexy centrists who Orin claims they need to win. That they've boxed themselves into a looney liberal corner they won't easily get out of.

Orin points to Clinton's tepid response on the Senate floor during debate, where she failed to mention the filibuster, only issuing a "tame" written statement. "Still, Orin said, "the fact that Kerry's filibuster lost by such a huge margin gives Republicans more ammunition to paint Clinton as out-of-the-mainstream, which is just where they want her."

And here's precisely where Orin and her fellow spinheads are clearly delusional. They marvel at how inept the Democrats are, reveling in every perceived screw-up. Yet they seemingly ignore every single poll out there that shows just how much voters see the Busheviks as out of touch with mainstream America. Whether it's his current 39% approval rating or his abysmal job performance on the Iraq war, the economy, health care and education, Americans are screaming their disappointment and clamoring for change. The Bushies and the GOP can mock Kerry and the Dem's all they want, but America's been telling them their own house stinks like a pig sty and needs to be razed.

Sure, mock Kerry, but what he did was stand up for something he believed in. Albeit a little too late and a little too meekly, but he stood nonetheless. And 24 others stood with him. Just 16 more and we'd be calling him Mr. Filibuster. And his liberal star would be shining brightly today. And no one would be mocking him.

But that's ok. Come November, the Orin crowd may be shell-shocked to learn just how many Americans stand with the left. Shocked at how many Americans want an end to the war; want affordable health coverage; better education for their children; more environmental controls; lower gas and home heating bills. Ya know, Deborah, the real issues. The issues voters are now acutely aware of after having been brainwashed into thinking that their best interests lie in keeping gays from getting married. The issues voters remember as what's vital to them and their families. And as they keep making these realizations, they'll remember more and more that it is the looney liberals that have taken care of them throughout modern history. And that's when we'll have the last laugh on the Orin crowd.
Posted by The Ostroy Report at 12:51 PM

Hope you're right. BTW, I really am impressed with writing style and wish there was more it in the great void known as modern journalism.

Andy, I too feel we can feel hope but we had this same feeling in 2004 and the polls backed us up until the votes were counted and again we were duped. Bush was hell bent on winning in 2000 and let nothing stand in his way. In those four years he was on the right path to taking over this country but he was running short of time so why not steal another election in 2004. Everyone felt like we were going to win in 2004 but by not having the voting machine problem fixed it was another slam dunk for Bush.

Until we get this problem fixed we will not see a Democrat win the majority either this fall or in 2008 and that you can take to the bank.

HAVE YOU HAD ENOUGH YET?

I would love to see the Dems take charge in 2006, but many districts are safe seats for the incumbents. Also, and I hate to say this, I do not trust the voting machines. I feel like the Repubs will just cheat like they have been doing for the last 2 elections and maybe more.

There is no doubt that the Dems have no chance at all if the voting machines aren't fixed so that no tampering with the voting results can be done. And, if that's fixed, the Repugs will find another way to try and steal the election for what will be the third time. The newly-found recognition that there is no center and the majority are against Bush and his crowd will we all hope continue to embolden the Dems to fight as if our lives depend on it because, in truth, they do.

How about taking a look at spin as an illegal activity. When what's said is misleading - ain't that the same as fraudulent reporting or disclosure or something? Or how about having a spinometer rating on each article or newscast. Maybe that would help those autopilot redstate voters get a clue. Just a thought, and by the way, I was proud of the Democrats for sending a 58-42 message on Alito! I agree 110% that the real issues get buried by partisan bs.

The ACLU is pushing for an INDEPENDENT COUNSEL. There surely is a need!