Alito's Only The 3rd Nominee in 86 Years Opposed by ACLU 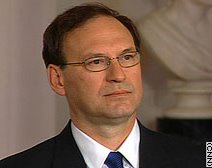 The American Civil Liberties Union has done something it has done only twice before in its 86-year history: oppose a Supreme Court nomination. The civil liberties organization has announced it is opposing President Bush's nominee, Samuel Alito, to replace the retiring Sandra Day O'Connor. Not since Robert Bork in 1987, and William Rehnquist before him, has the ACLU opposed a nominee.

Romero, speaking Tuesday on Air America Radio's Rachel Maddow show, said that his organization finds most troubling the content of Alito's statements and opinions and his judicial record. President Bush, he said, "has seized unilateral executive powers;" having Alito on the High Court is a major threat to Americans' civil liberties as a result.

Romero cited Alito's troubling decisions on race, religion, and reproductive rights during his years as a federal appeals court judge. What concerns the ACLU and Democrats everywhere is that these are the key issues where O'Connor provided the crucial swing vote.

Alito has a frightening 15-year paper trail which the ACLU has meticulously detailed in a issued a 68-page report. This documentation of Alito's record on civil liberties and civil rights was sent in December, along with a letter expressing "deep concern," to Senate Judiciary Committee Chairman Arlen Specter and Ranking Member Patrick Leahy, urging the committee to conduct a thorough review of Judge Alito's record.

Both the report and the letter are available at http://www.ACLU.org.

"Judge Alito has all too often taken a hostile position toward our fundamental civil liberties and civil rights," said Caroline Fredrickson, Director of the ACLU Washington Legislative Office. "The Supreme Court is the final guardian of our liberties, and Judge Alito has shown that he lacks the dedication to that commitment. Recent revelations about White House-sanctioned domestic spying, in defiance of the law, make it clear that the Senate cannot, and must not, approve this nominee."
Posted by The Ostroy Report at 7:38 AM

This was a very important post. Thank you for making me aware of this.

In principal, many of their (Bush Admin.) contributions have completely sidestepped any debates on the constitutionality of their authority. For instance, consider the Patriot Act. There are many elements of the Patriot Act that obfuscate, through the supposed importance of expediency, the complete undermining of our constitutional rights. Another example is in that of the domestic spying program and the authorization of searching (and acquiring evidence) without a court warrant. Once again, completely undermining the constitutional legitimacy, and therefore our God given rights.

So never could I have predicted such a quant situation for an upcoming Court Justice. With the likely pressing for Alito's views on domestic spying in the U.S., we have the intersection between our constitutional rights and the potential Justice's view on the constitutionality of it all. So in conclusion, Alito could indeed go down in flames, and for that, I'm very hopeful that he does.

I think it’s imperative that we boldly reinforce, in the public’s mind, the Bork-Alito connection. The GOP should not be allowed to exploit the skin-deep contrast between Bork’s Reagan-era right-wing bravado and Alito’s coolly evasive and placatory rhetoric.

There is one orgaization in particular dedicated to getting this message across (http://www.goodstorm.com/stores/leftink). I found at least two shirt designs devoted to raising awareness of Alito’s pernicious agenda. I recommend checking them out. I’m really thinking about getting the “Acusar Bush” shirt for my mom.

why are the democrats not fighting harder on this? why won't they filibuster?