Feinstein Wimps Out on Alito. Dem's Still Have a Lot to learn About Winning 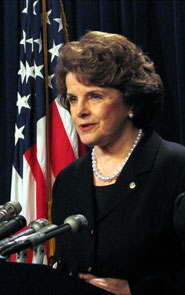 "This is a man I might disagree with. That doesn't mean he shouldn't be on the court." So said California Sen. Diane Feinstein Sunday on CBS's "Face the Nation." And there you have it. In one single sentence, Sen. Feinstein demonstrated why the Democratic Party is having such a hard time winning elections and defeating the political, social and legal agenda of the radical right. Can you ever imagine anyone, anyone, on the Republican leadership side--Frist, DeLay, Hastert, Blunt, Cheney etc.--ever being so damned fair and balanced? Not until hell freezes over. That's because Republicans get it. Republicans have one goal in mind: winning. It's something the Democrats have yet to fully grasp.

Feinstein plans to vote against Samuel J. Alito Jr.'s appointment to the U.S. Supreme Court. But she will not support a filibuster. Feinstein, a lifetime supporter of women's reproductive rights, called the anti-abortion Alito "clearly qualified" and said she was "very impressed with his ability to maintain a very even demeanor during this entire thing and his ability not to specifically answer any questions." Shouldn't this last statement be reason enough to do whatever possible to block his confirmation?

When will Democrats stop being so concerned with impressing conservatives with their civility and righteousness? They don't get it in return. In fact, they get the exact opposite. Remember the political lynching Bill Clinton got back in the 90's? Or how Republicans vilified Max Cleland? Or how the right condoned the Swift Boat attack on John Kerry? This is a party that will pull out all stops to win. I'm not suggesting Democrats do the same. I believe we are the more righteous party. But Feinstein's stand, or lack thereof, on Alito is just simply foolish. Can't we at least get a fight? Are we that blase? That exhausted? That unorganized? That inept? That scared? Where's the execution of the strategy that was hatched at the now-infamous 2001 retreat where Democrats and legal scholars mapped out a defense against the Bush hijacking of the judiciary? It's as if the Democrats have just laid down and died. It's frustrating and disheartening. I don't mind losing. But losing without a fight is unacceptable.

When will the Democrats finally step up and realize we're at war here? If fighting Alito's appointment...if having an activist conservative court for the next 35 years... is not worthy of a filibuster, what the hell is? What are they waiting for? It's time to send a loud message to the GOP by doing everything possible to block Alito's confirmation.
Posted by The Ostroy Report at 8:03 AM

I read where Feinstein's husband has defense contracts. Perhaps this is why she is not fighting Bush.

Also, if Alito is the vote that over rules Roe, there is rumor that the Republicans will suffer big time at the hands of the moderates in their party.

I wish our side would fight more, but maybe the GOP will finally fall apart with Alito.

Andy, I think it would be futile to filibuster Alito. The votes could possibly be there to stop it anyway.
Who do you expect Bush to appoint? Not someone that agrees with your viewpoint, obviously. Some of the other names mentioned would be a lot more radical right than Alito I am afraid.
As for winning elections, a bruising and eventually fruitless filibuster would probably not help Dems in the next elections.
I think they played this about right. Even so the press seems to indicate that the fawning, butt kissing Republican performance hasn't helped them particularly.

This is not the first time Feinstein has "gone Republican" I crossed her off my liberal list several years ago when it was reported (I forget in what paper) that her husband has benefited by business dealings with the Republicans. Of course, I have no proof. I only know what I read in the paper which is as we know not always reliable. But even if not true, she's wavered on important Dem. causes too many times. She needs to be checked out.

Senator Feinstein is a "Republocrat". It is imperative that Democrats get their act together and prevail over the "Brezhnev Republicans" in '06 and '08. Read the most recent post in the *Intrepid Liberal Journal* entitled, "The Winning Formula: Compassion & Toughness" for some ideas on how to accomplish that.

Nice piece of work on Feinstein.

I don't believe we have a viable two-party system at this time...

and...NO...I have not given up on political activity and political discourse.

I agree with you Chuck. I really believe we need at least a 3 party system in this country to effect any change, but the "WHORES" in washington will never allow it as it may upset the status quo.

The only reason I support the democratic party is that I hate BUSH and everything he stands for.

I have to ditto Joe above on his remarks. The Democtatic party has been a let down but I too HATE the Bush crime family and most if not all Republicans.

Anyone that calls themselves a Republican must like what their party is doing and stands for/ They then are no better then the worst of their party. The Republican party has done NOTHING to help the average American, why would anyone support such a party.

We don't need a third party (unless it's a right wing party that'll bleed votes away from Republicans like the idiot Nader did from the Dems.) What we need is better Democrats. It's up to us to find, promote, back and invest in them. And when we hate them, we need to remove them by not re-electing them. Better Democrats. I for one would take Gore over most of these whimp bastards any day of the week.

Spot on. I would MUCH RATHER have the Dems fight and lose a filibuster on Alito, than to roll over on their backs like Feinstein just did.

I have already told my Senator (Ken Salazar) that filibustering Alito is the "litmus test" for my continued support.

I'll vote Green before I vote for another namby-pamby DLC Democrat.

In 2000 I voted for A. Gore. I was a H. Dean supporter in 2004, until he was defeated in the primaries. I'm one of those "IDIOT" who voted for Nader in 04. Name one issue that you disagree with Nader.
What you so called Democrats need to do is to take a good look in the mirror before blaming R. NADER for what took place in 00 & 04.
Nader speaks what you people don't want to hear.....THE TRUTH.
It's people like you that keep voting for the likes of Feinstein and Lieberman that keep these criminal Republicans in power.
Ralph Nader din't take a single, not one, vote from J.Kerry.
Only J.Kerry himself and DIEBOLD Voting MACHINES could take votes from J. Kerry. Stop supporting Democratic candidates that belong to the DLC. They are Rep.Lite.
Democrats need to show their true colors by demanding that their elected rep. and candidates sign a Contract statement by April 1, 2006(FOOLED TOO MANY TIMES)
that 1.voting machines have a paper receipt OR NO Electronic Voting will be allowed in any future elections,2. remove all US TROOPS from IRAQ ASAP,3.all Democratic Senators not supporting a filibuster on Alito should expect a "Better Democrat" to run against them in their next senatorial election,4.WILL vote to impeach both Bush AND Cheney,5.Promise to have OPEN hearings on THE 2000 & 2004 Stolen Elections.6.The first Democratic Primaries should be held on the same day in 5 representative Blue States in 5 regions of the country(sorry but IOWA and NEW HAMPSHIRE ARE NOT REPRESENTATIVE OF MY VALUES).
Elections need to be transparent and honest,otherwise we are just spining our wheels. Left of Liberal

Two points:
DI-FI is another Zell Miller. She tells people she should be bi-partisan, and she often votes with the Reps. She's pro-war, and why not, she and her husband control the Perini Corp in Iraq, a junior-sized Halliburton, scooping big bucks from the tax payers. She has blood on her hands.

2. Why didn't Nader enter the primaries as a demo instead of starting another party ? I agree he would have done better. I agree about Iowa and New Hampshire, California and New York should decide our nominees. I like Al Gore in 2008.

Nader is not a Democrat, much less a Republican. He is not welcome in The DLC CONTROLLED DEMOCRATIC PARTY. Until real Democrats STOP supporting THE CORPORATE WING OF THE DEMOCRATIC PARTY, there'll not be a true opposition party in America. If money is all that matters in politics, then you are in favor of the status quo. The Democrats and the Republicans both agreed to deny Nader's participation in the so-called presidential debates. Republicans don't care about the truth. Democrats are afraid of the truth.
Howard Dean told the truth,but most
democrats did not want to hear the facts(against the war). John Kerry(supported Bush'S ILLEGAL WAR).
Don't just vote for the PARTY.
Vote for what is good for America.

It's not too late. Left of Liberal