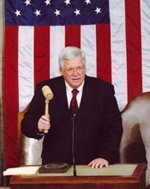 In the wake of Jack Abramoff's guilty plea Tuesday to conspiracy, tax evasion and fraud charges, a spokesman for House Speaker Dennis Hastert says the Illinois Congressman will return $69,000 in funds contributed by Abramoff. But instead of returning it to the indicted lobbyist, Hastert will donate the money to an as-yet-named charity, it was reported Tuesday on MSNBC's Hardball with Chris Matthews.

Now that it's abundantly clear that Abramoff is set to likely rat out his cohorts, many in Washington, like Hastert, have begun the cleansing process and have either returned donations or plan to. These include Sen. Conrad Burns (Mont) and Rep. Bob Ney (OH). Many, like Ney, are claiming to have had no knowledge of Abramoff's illegal activities and say they were merely "duped." Lord knows we all know how naive those poor old politicians can be.

The investigation into Abramoff's corruption is believed to involve as many as 20 members of Congress and aides, as well as possibly several administration officials. Remarkably, approximately 220 lawmakers received at least $1.7 million in political contributions from Abramoff, his associates and nine tribal clients between 2001 and 2004, according to a review of Federal Election Commission and Internal Revenue Service records. Of those, 201 are still in Congress.

"When this is all over, this will be bigger than any (government scandal) in the last 50 years, both in the amount of people involved and the breadth to it," Stan Brand, a former U.S. House counsel who specializes in representing public officials accused of wrongdoing, told Bloomberg.com. "It will include high-ranking members of Congress and executive branch officials."
Posted by The Ostroy Report at 10:17 PM

It will be interesting to see which "charity" receives the money. I am suspicious that many of these Moon Foundation "faith based" charities kick back to the pols.

I've wondered often... in the wake of the McCain finance reform bill, how many of these faux-charities have shown up. These people who seem to act like they have the credentials to be on the nightly news championing their 'view points'.

Anyone have an idea if there is a watchlist out there?

I used to live in Illinois and I can tell you people there don't think too much of Dennis Hastert. The proof will be in '06. He's a former high school wrestling coach with a very limited intellect. I have never read any thing nice being said about him from anyone. He's gotta go!

I don't know how anyone can look at the Republican Party and not associate them with tyranny and corruption.

Something's rotten...and not in the state of Denmark.

I think this bribe money ought to be conftituted.Its just as ilegal as dope money.I dont see how this can help them as the crime has already been done