Bush & Cheney Are The Great "Protectors?" Give Us a F***king Break 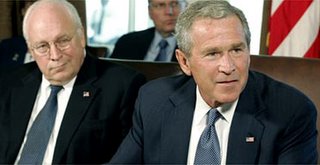 Fresh from my utter frustration over the Democrats' failed (and pathetic, I might add) attempt to filibuster Samuel J. Alito Jr., I have to also admit that I'm getting Irritable Bowel Syndrome listening to conservative twits like Pat Buchanan declare that it is President Bush and VP Dick Cheney whom "Americans want to protect them." Exactly which Americans are they talking about, because last time I checked, most of the country's voters, according to the latest polls, think the Busheviks are responsible for much of the nation's woes. As for the myth perpetuated by Buchanan and other GOP spin-monkeys, maybe it's due to years of unfair double-standards in this country that Texans and ranchers are tough guys while New Englanders like John Kerry are wimpy prep-school sissyboys. It must be that, because it sure as hell ain't based on facts or on the record of these two draft-dodgers since they grabbed power back in 2000.

So to set the record straight, let's revisit this impressive record, shall we?:

Is there anyone out there who truly believes unCurious George and his sniveling sidekick, two inept war-mongering maniacs, are the best we have to protect America? Give us a f**king break.
Posted by The Ostroy Report at 7:52 PM

Pathetic, indeed. But the previous post about Russert harrassing Frist gave me something like hope. I mean, half the time I see Russert he's still obsessed with Clinton's cock. Nice to see him finally pinning down some of the real creeps.

I am having a real pessimistic thought:

Though a majority of Americans do not like the tyrannical aspects of the Bush-Cheney Regime, a large number do like a FOREIGN POLICY BASED ON SECURING OIL...

So...where is the FOREIGN POLICY LEADERSHIP to give us a PLANETARY FUTURE BEYOND OIL IMPERIALISM?

All I can say to all of the Republicans, Democrats AND Independents of this country.

HAVE YOU HAD ENOUGH YET?

Just wait: Alito is not just about a woman having choice. It's about privacy rights, your right to sue, equality for women, the disabled and minorities. As usual, Americans will not know what this means until it all shakes out. Even angry white men have wives, daughters and female friends who will have second thoughts about all this down the road. The fight will have to be fought all over again. I find this all very scary.

Alito has always sided with the government and/or corporations against the private citizen. We are in the second Gilded Age. Read your history.

This is another high-quality blog entry. Such information should be common knowledge, but it isn't.

I talked with some local Democrats last week and told them that our biggest mistake was giving Bush an initial pass on 9/11. Maybe you weren't guilty of this, but I was. And so were many other Democrats.

Bush used our desire to be patriotic Americans to ram through his pro-robber-baron, pro-military agenda. Bush's actual record fighting TERRORISM sucks rocks. Not only did he fail to stop the biggest terrorist attacks in U.S. history, but worldwide terrorism has skyrocketed since the Iraqi invasion.

Bush is both criminal and incompetent (no hyperbole here). Bush should be impeached and indicted here at home, and stand trial internationally for war crimes. Any member of Congress who claps for him tonight even once is a traitor.

maybe it's time for a draft. this is just not hitting home to people yet. maybe if their children's lives are on the line, they will think differently. no deferments either because they won't need a college degree where they're going.

now is the time for a viable 3rd party. would love to see gore lead that party too ... right on into the white house.

and make no mistake about it. supreme court justices can be impeached too, or recalled, or whatever if they are not doing their job. no one is immune from getting fired.

Two months before the 2008 elections... bin Laden is captured by Bush when Bush becomes a Jack Bauer wanna-be... Bush immediately, based on new popularity numbers, asks for the 22nd amendment to be revoked so he can finally be King George.

I would amend numbers one and two:

1. Bush got the intelligence report in AUGUST before, obviously before Sept. 11 that there was the possibility of such an attack. To state the obvious for emphasis: he ignored the warning; and,
2. Cheney and I guess the rest of them demanded that the intelligence reflect what he/they wanted to hear. They knew there were no weapons of mass destruction. I KNEW there were no weapons of mass destruction after listening to Scott Ritter and others. Not only that, that silly little picture Powell showed to the UN seemed to confirm the absence of such weapons; or, at the least, it proved nothing.

Right the F--K on. Every time I see Bush and Cheney, I want to go get a rope and tie those assholes to a tree - this from a 58 year-old who served in the U.S. Army during Vietnam and is a conservative. I swear I'd vote for Hillary before McCain or Frist! Bring on NOV 2006 and let's show 'em how Democrats can rule once again!

everyone seems to forget that the BIPARTISAN 9-11 commission gave these klutzes a FAILING GRADE. and they're bragging about protecting our national security???