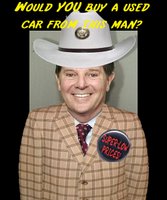 A dozen years ago rapper MC Hammer had a hit song with "It's All Good" before his career hit the skids, only to end up years later on VH1's has-been show, "The Surreal Life." Cut to 2006, and another rapper (as in rap sheet) named Hammer, Tom DeLay, could write a song called "It's All Bad."

DeLay's also lost the support of Rep. John Kline (R-Minn), a former Marine officer and conservative hard-liner, who said he'll be signing the petition. Additionally, Rep. JoAnn Davis (R-VA), another radical right-winger (one of those decrying the "War on Christmas") plans to return $10,000 received from Delay's PAC.

The Bass/Flake petition needs 50 signatures out of the House's 232 GOP members in order to force the leadership election. It has about 24 signatures so far, and seems headed towards its goal quickly.

DeLay's fellow GOP'ers are increasingly viewing his tenure in the House and as Leader as an untenable situation for him and the party. The Texas indictments; the looming fallout from the Abramoff house of cards; the Supreme Court's pending review of his Texas redistricting scheme; and his dwindling support in his home state and district all spell major trouble. In an all-important election year, they wisely want no part of it.

Note the Wall Street Journal's editorial Friday. Even this staunchly conservative newspaper suggests "Cleaning House," and that DeLay and the GOP "should move on separately."

At this point, the odds of DeLay returning to his power post are slim and none. He may even find himself out of a job next November, if not earlier if his mounting legal troubles force his resignation. Perhaps then, like his hip-hop namesake, we'll someday find this Hammer on "Surreal Life" as well,sharing a house with other washed-up has-beens.
Posted by The Ostroy Report at 9:07 PM

It really does look like DeLay is out now. Oh well.