Abramoff Will Sing, and Many Corrupt Republicans Will Finally Get Their Due 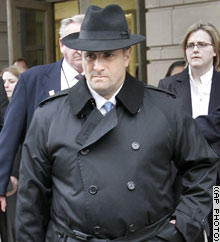 Disgraced, indicted GOP lobbyist Jack Abramoff pleaded guilty Tuesday to conspiracy, fraud and tax evasion charges, and has agreed to be the government's star witness in its wide-ranging corruption investigation. And if conservatives in Washington are very nervous, they ought to be. The hammer's soon gonna fall on the GOP, as Abramoff had close business and personal ties to several prominent House and Senate Republicans as well as key conservative leaders including former House Majority Leader Tom DeLay (TX); Rep. Robert Ney, (OH); Sen. Conrad Burns (Mont); Rep. John T. Doolittle (CA); Rep. Dana Rohrabacher (CA); former deputy Interior secretary J. Steven Griles; Americans for Tax Reform director Grover Norquist; and former Christian Coalition chief Ralph Reed. And there are many others. Wake the kids and grandma, folks. This could get very interesting.

Abramoff's a proven schemer and highly shrewd operator. His loyalty is to himself. Facing a huge 10+ year stint in the slammer, he's not likely to go down without taking a few of his former cohorts along for the ride, especially if it significantly reduces his sentence. For many months now, key Republicans, especially those in the Bush administration, have been quite cavalier, acting as if this scandal had no legs. But the prosecutorial hat-trick scored with the indictments of Abramoff, his former aide Michael Scanlon and former White House aide David Safavian will no doubt bring down many in this morally, ethically and legally corrupt Republican leadership.

And will it be the political impetus for a change in control of the House and possibly the Senate next year? The chances of that just got a whole lot better today.
Posted by The Ostroy Report at 5:15 PM

I know the percentage of people receiving gifts, etc may be GOP members, but I hope anyone from the GOP to the DNC who are nailed for receiving anything from Abramoff get 'theirs'.

It is high time this sh*t is stopped and politicians once again work for the people, not for those who have a financial agenda.

Just like 2005 brought us Katrina and the outting of Bush for what a dope he really is, 2006 will bring about a reveiling of how corrupt the Republicans and some Dems are. I just hope the media continues to keep growing their balls to dig into these stories, they finally started in last year and hopefully will do their job.

I hope they give old Jack a 24/7 guard and tight security or you can bet he'll meet an early death. He's stepping on some big boys this time around and his life isn't worth a plug nickel.