Bill Frist Skewered by Russert on Meet The Press 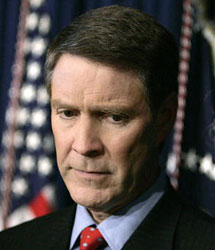 Tim Russert's genius as an interviewer could not have been more on display than it was Sunday during his masterful exposure of Senate Majority Leader Bill Frist (TN) as a liar and political opportunist. On a slew of subjects ranging from Iraq to the economy to the Terri Schiavo case, the NBC host put a litany of Frist's words and actions on trial, leaving the heart surgeon-cum-politician stammering, fidgeting, rocking and looking more uncomfortable than Karl Rove in a size 34 waist pants. To be honest, Frist could not have looked wormier and less credible.

On the issue of Iraq, Russert asked Frist if the war was still justified since no WMD have been found. The good doctor replied that it was, but gave no logical reasoning: "It's a war of necessity. Again, if we project ahead and we start looking back, you can always say, 'Well, that is the outcome that occurred and we could take no other choice.' The problem is, the reality is that we need to make decisions today based on intelligence, based on the facts that are delivered to us. And, therefore, at that time, it was absolutely a war of necessity."

On the fact that President Bush's grand plan for Democracy in the Middle East looks shakier than ever given that hostile parties have won elections in Egypt, Lebanon, Iraq and now the Palestinian territories, Frist said: "We are very unhappy with the results, very disappointed in the results. But the beauty of democracy is that it reflects the reality of what is on the ground. It reflects the reality of those grass roots, of what people are feeling." Huh? Is this really why 2200 US soldiers have died, so that a bunch of lunatics on the ground can "freely" suicide-bomb their way into elected office? Is that really the kind of "Democracy" Bush is striving for?

On Bush's illegal wiretapping scheme, Russert cited the Foreign Intelligence Surveillance Act, Section 1809, which very clearly states that "A person is guilty of an offence if he intentionally - engages in electronic surveillance...except as authorized by statute." He then asked Frist if Bush "has, in fact, engaged in electronic surveillance and not authorized it by statute?" Frist replied...."I believe this program is lawful, it is constitutional. I strongly support it. I know, I know it is vital to our security," saying that it consisted only of Al Qaeda-related communication intercepts. As reported in the NY Times on Jan. 16 however, FBI officials said the NSA snooping was exhaustive and a waste, yielding few viable leads and likely invading the privacy of innocent Americans.

When Frist tried to paint a positive picture of the Bush/Cheney economy, Russert put a chart up on the screen and said: "Unemployment was 4.2 percent in 2001; it's now 4.9, up 17 percent. There was a $281 billion surplus and now a $400 billion deficit. And the debt has gone from $5.7 trillion to $8.2 trillion, up 44 percent. You call that conservative government?

FRIST: Well, it's pretty straightforward, the facts speak for themselves. I did voluntarily, when I came into the United States Senate, set up a blind trust, purely voluntary, to eliminate any appearance, any appearance of a conflict of interest over the last 10 years.

RUSSERT: But it wasn't blind, Senator.

RUSSERT: But it's different when you can see it. You told CNBC, "It should be understood I put this into a blind trust. So far as I know. I own no HCA stock. ...It's a blind trust. Totally blind. I have no control." That's not accurate.

FRIST: You know, I could've been more precise in my words.

Turning to the highly controversial right-to-die case of Terri Schiavo last year, Russert asked Frist about his "video diagnosis" in which, from the floor of the Senate, he without question declared that she was not in a persistent vegetative state as her doctors and the courts had ruled. Once again backed into a corner by his own words, Frist replied: "I didn't make the diagnosis. I raised the question of whether or not she's in a persistent vegetative state." Here again the good doctor has a memory lapse.

It was a beautiful thing to watch....Frist squirming in his chair, repeatedly pausing so he can find the right words to lie his way out of the truth. Let's hope voters go to the polls next November remembering this and other memorable Republican performances of 2005/'06.
Posted by The Ostroy Report at 10:41 PM

I am not inamored by Russert and most of the other interviewers on TV. True, they ask the hard questions but do not challenge the lies which remain the last word thus to be believed as the truth, at least by the ignorant, the lazy, the stupid, or the "wanna believers." To be helpful and effective the lies must be challenged at once. The formula: the hard questions followed by "calling them" on the lies

Sometimes Russert is a pitbull, and it looks like yesterday was one of those times. I don't have the patience to watch through the other times, so thank you for the summary.

Anytime that Frist gets put in his place this is a good thing.
There are many of us who can't wait for him to leave office.

I saw this. I usually fast forward through any GOP talking head as it is usually the same old party/ROVE LINE.But Russert did a good job hammering this lying bastard. I was LMAOFF as this clown squirmed. He also took that liar Condi Rice to task a few weeks back.

He has a good research team that digs up the goods on these scumbags.

Damn I surfed right past this one.. i caught the line about the blind trust thing but BILL FRIST makes me want to heave my dinner most of the time so I clicked on through.. should have paused.