Democrats Must Filibuster The Lying Alito 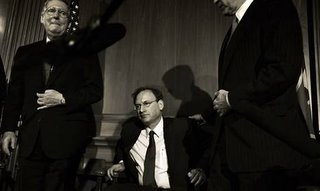 How come I can remember that I was in the Cub Scouts when I was nine, and that Wayne Burte's mom was our devoted Den Mother, but Bush's slippery Supreme Court nominee Samuel Alito Jr. can't remember if as a 35-year-old he belonged to the Concerned Alumni of Princeton, an organization that allegedly tried to limit admission to women and minorities? How is it possible, I ask, that someone who expects to be appointed to a lifetime position to the highest court in the land can't remember something so critical to the process of assessing his overall character?

Alito's memory at 55 is apparently much weaker than what it was at 35, when in 1985 he was seeking appointment to the Reagan administration, and stated on his job application letter, among other things, that he was currently a member of the conservative alumni group.

Jump to 2005, when Alito wrote the following to the Senate as it prepared to hold hearings: "A document I recently reviewed reflects that I was a member of the group in the 1980s. Apart from that document, I have no recollection of being a member, of attending meetings or otherwise participating in the activities of the group."

And at Tuesday's hearings, in response to Sen. Patrick Leahy's (D-VT) questioning: "Senator, I have racked my memory about this issue, and I really have no specific recollection of that organization." He also claimed to be unaware of the criticism of the group when he included it on his 1985 job application. Isn't that a bit odd though? If he cannot remember the group, how can he remember what he didn't know about it 20 years ago? Am I missing something here?

In any event, if Alito's outright lying about the alumni group isn't enough to justify a filibuster, the Democrats would still have a laundry list of disturbing positions the judge has made in his 15 years on the bench on key issues including abortion, privacy, executive and legislative power, affirmative action and religion. The key question is whether Democrats will fight this fight till the end, or, as many Senators on both sides have privately said, Alito's confirmation is inevitable.

Listening to people like Sen. Joe Biden (D-DE) blather on incessantly Tuesday only further proves that the Democrats have a lot to learn about fighting the powerful right-wing machine. The over-intellectualizing and pontificating from Biden and Leahy was mind-numbing. Rather than hit Alito with a barrage of rapid-fire questions, the Democrats were hellbent on hearing the sound of their own voices, and in the process missing an opportunity to draw out Alito's true character, not the well-rehearsed automaton we saw Tuesday. Incredulously, Biden spoke almost four times as much as Alito.

A Supreme Court with Alito, Roberts, Scalia, Thomas and Kennedy is a frightening proposition. The Democrats must pull out all stops to prevent this from becoming reality. If Monday's and Tuesday's hearings are any indication of the Dem's capacity to fight, and fight to win, then we're in big trouble.
Posted by The Ostroy Report at 7:31 AM

I am right with you on this on.

A lot of my posts are delayed by blogger, though. I wonder why this is?

Do you remember putting it on your friggin resume?

Given that ALITO,this thinly veiled BUSH SHILL is about to put on his Robe, I thought this was pretty pertinent. What a great way for Bush to silence any and all IRRESPONSIBLE CRITICISM especially from those PESKY LEFT WING/ Liberal Blogs.

Will it apply to the Jackasses on the Right also???