Abortion Not "Settled Law" Says Alito; Democrats Must Filibuster This Extremist Judge Before It's Too Late 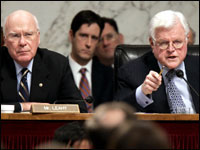 The eventual overturning of Roe v. Wade is more a reality than not if Samuel J. Alito Jr. is confirmed to the Supreme Court of the United States. President Bush, and hordes of drooling right-wing religious fanatics, will finally have their dream come true, and we as a nation will sadly see a reversal of over 30 years of social progress.

At Wednesday's Congressional confirmation hearings, Alito flat out refused to agree that Roe v. Wade is "settled law," leaving the door open to the landmark abortion case possibly being overturned if he makes it to the high court. He acknowledged that the 1973 case was deserving of respect as a precedent of the court, one that's been reaffirmed several times in 30 years. But there's a huge legal difference between "settled law" and "precedent." Unlike recent appointee Chief Justice John Roberts Jr., Alito refused to go beyond precedent and state that Roe is "settled law of the land", which would mean that overturning it would be near impossible.

Parsing his words in response to Sen. Richard J. Durbin's (D-Ill.) aggressive questioning, Alito said: "If 'settled' means that it can't be reexamined, then that's one thing. If 'settled' means that it is a precedent that is entitled to respect . . . then it is a precedent that is protected, entitled to respect under the doctrine of stare decisis." In Latin, stare decisis is traslated to "to stand by that which is decided."

I cannot imagine a scenario more grave than a Supreme Court led by a majority of Alito, Roberts, Kennedy, Scalia and Thomas. The Democrats must grow a spine and filibuster this dangerous nominee. If they don't roll out the filibuster on Alito, what the hell are they saving it for? Alito's confirmation will lay a frighteningly conservative foundation on the high court for decades to come. These extremist judges will forever change and divide America. Alito must be prevented from ever sitting on that bench. My God, Democrats, are you listening?
Posted by The Ostroy Report at 7:33 AM

As usual the American people are sleeping to just what Alito being on the Supreme Court means. It's not just the abortion issue. It's also a lack of women's perspectives as to discrimination in the workplace that O'Conner's life experience brought. Alito will not bring a women's life experience to the court. It will be left to Ginsberg to provide a woman's view.

In reality, this fight for the Supreme Court was won by Bush and the righties in November of 2004. Once Roe is overturned the question of abortion will return to the states. Women who want one will have to travel far to the states that will offer the procedure.

What a horrible burden this will be on women! I can see Canada from where I work. I hate to say it, but Canada looks pretty good right now. I just can't believe this is the kind of country Americans really want to live in.

Alright, if Al Gore is Mr. Candidate for 2008, can we please have him take the charge here. The Democrats sorely need a leader to declare this is worth a fillabuster.

He won't do it. None of them will. That's why our party is in trouble.

Well, let's not forget that the American people f***ed this up by handing both the executive and the legislative branches to the Republicans. I think the Democrats should definitely filibuster, but other than that, there's really not much realistically that they can do.

I wonder if Martha Alito will cry when rape victims and victims of incest will be forced to carry their unwanted children to term.

I don't think she will. I think she is more of a Carmelo Soprano type who only weeps when her husband get busted.

Alito's worst effect on the supreme court will be his obeisance to the idea of an all-powerful, monarchial president who can do as he likes. This is really dangerous in many areas (including giving the president power to overturn laws that are "inconvenient" or "quaint" or declaring the Constitution null and void.

As for Roe v. Wade itself, the GOP loves this issue during campaigns since they get all those "one-issue" non-thinking voters to go to the polls and vote against their economic and constitutional interests just to prove they are "pro-life" (except for supporting the death penalty to the max.) Losing that in the near future would cost the party an emotional wedge issue. I don't think it will happen as soon as some think.