Mrs. Alito Sheds a Tear, And Another Repug Hides Under His Wife's Skirt 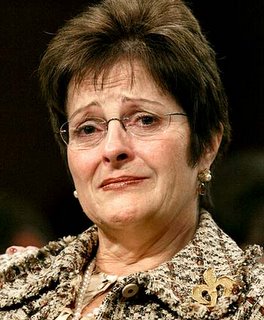 What is it about these tough-talking Republicans, who, every time the soup gets too thick, somehow find a way for their wives and/or mommies to enter the public debate and rescue them? Our big, strong AWOL of a president, George W. Bush, does it all the time. Uses Laura and Babs to deflect criticism and defend him with inane, self-serving statements, or, highly orchestrated acts of fake compassion.

And this week we saw it yet again, with Martha-Ann Alito's Academy Award-winning performance at her husband's grueling Senate confirmation hearings. Samuel J. Alito wants to be the next Supreme Court justice, and just about every Democrat in America fears this appointment like the Black Plague. So there they were, the usual liberal posse of Ted Kennedy, Joe Biden, Dick Durbin et. al., managing somehow to get a few hard-hitting questions out along with mega-hours of self-important, pontificating blather (not the Dem's best performance, unfortunately).

As if the Mrs. didn't expect this to be a blistering session for Sammy, she grew increasingly emotional and upset during Wednesday's hearings. So unfair was her hubby's interrogation, his "mistreatment," as Utah Sen. Orin Hatch called it, that the gentleman Senator from South Carolina, Lindsay Graham, felt compelled to come to the future justice's aid, lobbing loaded, softball questions designed to paint the picture of an honest, decent, compassionate, non-bigoted man worthy of a lifetime appointment to the nation's highest court. And with that, wah, wah, wah. Mrs. Alito's eyes welled up with tears, and, too distraught to remain in the chamber, she left. A big scene. Lots of drama. Well done, Ms. Alito! A performance that would make Spielberg proud! The mainstream press loved it! Republicans throughout the land loved it. And for sure, Sammy loved it too.

And so goes another case of...when the going gets tough, the tough get their wives and mommies to make everything better.
Posted by The Ostroy Report at 8:48 AM

Well Andy,
I watched some of the Alito confirmation hearings and, I know you have heard this from others, he didn't scare as much as some of the other possibilities that have been mentioned as picks for the Supremes.
I think some of the libs played into the hands of the right wing spinners and, as usual, Orin Hatch showed himself to be a first class booby hatch!
I don't think Alito merits a filibuster. I think lib efforts need to be focused on coming elections.
I don't think it is going to be the cake walk some seem to think.

It's worse than you think. Sam thinks that all women are like his wife and, whether he knows it or not, disrespects them as equals of men. If you want to know his Roe v. Wade vote, look at his weeping wife, the one without the brains to make her own decisions!

There is no hope until women, in this case of Alito's confirmation, and all of us (98%) who are oppressed start staging marches to Washington, and general demonstrations of displeasure. We as protestors need to be the backbone the Dems are not showing.

Go to Crooks and Liars and watch the "ten steps behind" video. Alito was soooo concerned for his wife that when yesterday's session ended he bolted out of the room leaving her behind. What a guy.

Let's see that one plastered all over the news.

I'm just glad someone wiped that arrogant smirk off her face.

The right wingers are all up in arms over the OH SO CRUEL Democrats.

I would say that Ms. Alito's tears are NOTHING compared to the ocean of tears that has been created thanks to BushCo.

Tears of frightened children, as bombs fall around their homes. Tears of orphans, of widows, of the mothers of fallen soldiers.

We're drowning in tears here, and the right-wingers can only worry about their bigot's wife.

She was snotting and balling cause of the questions this guy got asked..big deal.

I'm sure Eva Braun shed a few tears for Hitler when things started to go south with the German cause. He was still and Evil P***K though.

Mabye she's a democrat at heart and she was crying because of all the pussy questions being asked.

Waaah...waaaaaaah...waah... looks like a Karl Rove orchestrated move by Mrs. Alito... She needs to grow up...

A Different Anonymous than above