In Bush vs. bin Laden, The Smart Money's On bin Laden 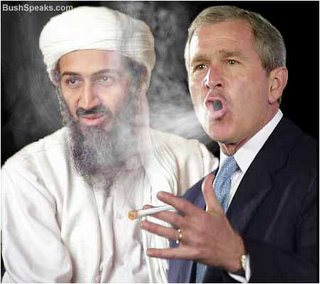 Osama bin Laden has issued a new audio tape which boasts of plans for new Al Qaeda attacks on American soil. He also called for a long-term truce if there's a pullout of troops from Iraq and Afghanistan. The Busheviks' reaction?

"We don't negotiate with terrorists," Vice President Dick Cheney said. "I think you have to destroy them." Cheney said the tape showed that al-Qaeda has been marginalized because "they didn't have the ability to do anything on video" and because it had been so long since bin Laden had been heard from.

And speaking for his bosses, White House flak Scott McClellan said: "Clearly the Al Qaeda leaders and other terrorists are on the run. They're under a lot of pressure. We do not negotiate with terrorists. We put them out of business."

So there you have it. The "Smoke Him Out/We'll Get Him Dead or Alive" Bushies discounting yet again the threat of violence from the terrorist scum responsible for vaporizing 3000 Americans and hundreds more around the globe. The administration with the worst intelligence record in the history of the presidency assures us that bin Laden and Al Qaeda have been neutered and weakened, mainly because we haven't seen him in a while and because we've reduced him to audio (as far as I'm concerned, he could issue an 8-Track tape and I'd still feel chills down my spine).

The Bushies' mantra is that time is on their side; that four no-attack years since 911 is proof that we're winning the war on terror here at home and have secured our borders. Forget the fact that there was an eight-year span between the first and second World Trade Tower attacks, and that bin Laden took his time to masterfully plan same. Forget the fact that acts of terrorism in Spain, London and elsewhere suggest that Al Qaeda is anything but weak and disorganized.

While Bush and Cheney tirelessly run around bragging of their machismo, and of their success in hammering away at the man they once promised to capture no matter what, terrorism experts everywhere are saying it's a matter of when not if we'll be attacked again here at home. Once again, this administration can't seem to level with the American people. Call me crazy, but when it comes to intelligence, I don't believe one word that comes out of this White House.

And speaking of telling the truth, ya know that macho declaration about not negotiating with terrorists? Well the U.S. government, as reported recently in the NY Times and elsewhere, is in secret talks with Iraqi insurgents in an effort to enlist them in our fight against Al Qaeda in that region. But wait just a second! I thought we were over there fighting terrorists? Especially since, according to the military's own statistics, about 90% of who we're battling there are Iraqis, not Al Qaeda or other terrorist groups. So if the insurgents are terrorists, as Bush and Cheney constantly ram down our collective throats, then it sure as hell sounds like we're negotiating with terrorists. Sorry Dick, your bullshit has been exposed once again.

I'd really love to experience just one day where this administration tells us the truth.
Posted by The Ostroy Report at 6:29 AM

I am one who just has doubts when it comes to Bush and his Bin Laden tapes. It's suppose to be 6 months old. The CIA verified that it is probably Bin Laden. How do we know that the CIA didn't make the tape in the first place?

I'm sorry, because we could be in for another attack, but I just have a very hard time believing anything Bush says.

Notice how whenever Bush seems in trouble (Abamoff, spying scandal) we get a fear message from the White House.

I work steps away from where Super Bowl 40 will be played. Security during Super Bowl week will be so tight that they are going to scan cars and remove mail boxes. Cars can not stop and unload in front of buildings. Bus riders will be dropped off 6 blocks from where I work. Because so many Arabs live in the Metro Detroit ares, I'm hoping that will spare us from any attacks from Bin Laden. Still, the warning that it will be in our homes, (game on tv?) makes me wonder...

This is a a bit off this subject but PLEASE read Molly Ivin's speech at http://www.cnn.com/2006/POLITICS/01/20/ivins.hillary/index.html

She is saying just what we and Andy have been saying for sometime now. This is a must read.

I think Al Gore has started many to rethink what direction we need to go.

I have not one scintilla of doubt that this whole Osamarama tape is a product of Uncle Karl. It practically has his damn name on it. There is nothing, repeat, NOTHING that these creatures will not do. Stealing the Election was but a polite calling-card. I'm probably one of the least paranoid individuals on earth---but I believe nothing emenating from either the MSM or the WH.

That fat f**k Rove yesterday went public with his plan to use terrorism to win the midterms. These F**kers are so bold they're not even hiding theire BS anymore.

Um, previous anonymous: how did Uncle Karl go public with what plans? Not that I don't believe you, but what did I miss? God, one afternoon of mindless shopping and they creep further into the yard...

I HOPE AL GORE CHALLENGES THE MEALY MOUTHERS (LIKE FEINSTEIN, BAYH, BIDEN, KERRY, AND CLINTON) TO STOP PLAYING DEAD IN A NATIONAL-SECURITY POLICE STATE HERE IN THE U.S.
Someone should wake up these gentry folk.

Bin Laden can make some weapon that can damage the United States but he can't make a video tape? Anyone, anywhere can make a video tape. How can such ridiculous statements get by people? I doubt if the tape is Bin Laden anyway, it is waaaay to convenient.

All this crap about Osama. The guy has only ever said he wants westerners out of the Middle East.

Yet that video has been specifically endorsed by George Bush as authentic. In a court of law when a falsehood is demonstrated in this way EVERY subsequent statement is taken to be doubtful. We should apply the same standard here.

Only the CIA vouches for the recent bin Laden audio tape. Other experts have denounced it. Osama normally quotes the Koran, but here he quotes Bill Blum calling for an apology from the US. Remarkably, Bill Blume was once an editor and contributor to Covert Action Quarterly, a magazine devoted to exposing CIA operations like the arming, funding, and training of Bin Laden during the Afghan-Soviet war. The likelihood that a real Osama would quote Bill Blume is zero. (>>)

Keith Olbermann points to a litany of terror alerts in the US which have question marks about them. (>>)

The US government is producing doctored tapes and false terror alerts for domestic political advantage.When the penny finally drops with the general public then the question will be asked: "If they lied to us on this one, what else have they lied about?"

Would people please stop responding to lies as if they are real.
Fabricated tapes produced by proven liars should be forcefully rejected.

Now I know foxes reputation, but back in 2002 they said bin laden dead of kidney failure..I believe laden is dead and bush and cheney faked this tape..Yes its bin ladens voice from a long time ago..They are not even good at covering up they are so incompetent..I also believe and I hope I am wrong that they are losing there base and rebugs are going to be indicted showing white house participation, ..They are going to give us another 9/11 to get us to get with the program soon and this scares me to death becuse most american sheep will believe them again..It sounds like I dont believe or trust this adminstration,, wonder why..