Gore "Not Running" In '08? Get Real. Blistering Attack on Bush Is First Unofficial Campaign Speech 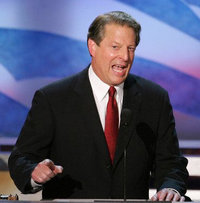 Is there anyone out there who still believes former vice president Al Gore is not going to run for president in 2008? If so, I have a timeshare in the Sunni Triangle I'd like to sell you.

Gore unofficially kicked off his '08 campaign on Monday with a blistering attack on Bush over his secret spying program carried out by the National Security Agency since the 9-11 terrorist attacks. Gore called for an immediate special counsel investigation into the warrantless domestic eavesdropping scheme, and said the president's actions violate the law. The speech was made to The American Constitution Society and The Liberty Coalition, who jointly sponsored the event.

Make no mistake, Al Gore is running for president. Bet the farm on it. He's been running for some time now. And Monday's fire and brimstone speech, delivered on a day celebrating the life of Dr. Martin Luther King Jr., should be a wake up call to every Democrat who's set his/her sights on the White House. Gore has more passion and more mojo than any of them, and has been front and center on a number of key issues including Iraq, the environment and executive power, aggressively taking on the president while others in the party are too afraid to go for the political jugular. And he's been exciting Democrats in ways Hillary Clinton and John kerry wish they could. His overall presentation and message is resonating extremely well with voters. He's The Comeback Kid.

On Bush, Gore declared: "A president who breaks the law is a threat to the very structure of our government." He issued a scathing critique of Bush's illegal wiretapping scheme, questioning the national security rationale that it's based on:

"Is our Congress today in more danger than were their predecessors when the British army was marching on the Capitol? Is the world more dangerous than when we faced an ideological enemy with tens of thousands of missiles poised to be launched against us and annihilate our country at a moment's notice? Is America in more danger now than when we faced worldwide fascism on the march-when our fathers fought and won two World Wars simultaneously? It is simply an insult to those who came before us and sacrificed so much on our behalf to imply that we have more to be fearful of than they. Yet they faithfully protected our freedoms and now it is up to us to do the same."

On Attorney General Alberto Gonzales, Gore said: "A special counsel should be immediately appointed by the attorney general to remedy the obvious conflict of interest that prevents him from investigating what many believe are serious violations of law by the president."

This is a man who looks, sounds and is presidential. Let's not forget he won the popular vote in 2000 and, as many believe, was robbed of the presidency by Florida and the U.S. Supreme Court. He'll be back in '08 to finish the job. Take it to the bank.
Posted by The Ostroy Report at 7:06 AM

Andy, I too watched President Gore and felt proud again to be a Gore supporter. I have NEVER seen him give a better speech and his delivery was right on the mark. Al gave the rest of the Democrats something to really think about from here on out. The Dems need to start standing up to King George and stop being one of them because they “feel” it’s what the people want.

If Al doesn’t run he will be missing his golden opportunity because he does have the big Mo on his side and he needs to keep these speeches coming. I hope he gets on some of the network shows now to explain to the simpletons of this country what is happening.

Hi Andy,
Yes I have no doubt Gore is running but I do doubt that he will win the nomination and I do doubt he could get elected now.
I wish he had not been robbed as we all know he was. Things would likely be very different now.
I fear the riht wing smear and propaganda machine has marginalized Al Gore and he will have a rocky road.
I don't hear swing voters clamoring for Gore or anyone else. It is going to be tough and support will have to be built anew.

I agree on the fact Gore's running. Hell, he's the only one who has a clue and is willing to follow his instincts on discussing why this administration is so horrible. The other dems are totally gutless on EVERYTHING including Alito. I wish I could have questioned him. The minute he said he would rather not answer the question, I would have shot back. You are applying for a job, either answer the question or forget about getting the job. Simple as that. Pols don't get it that it's okay to actually say things of substance. This is why we are in such deep sh*t.

Watch out for Giuliani! Gore is the only one who can beat him. If the Dems have half a brain among them, '08 will feature Gore & Edwards. Choosing Hillary will be suicide. The rest of the Democratic hopefuls are either not yet strong enough politically (Obama) or chickens (Kerry, etc.).
http://www.e-tabitha.com/timeline.htm

I have no question Gore is the most qualified person on the horizon for 2008. I am just dreaming, but how about Gore/Nader in '08?

He was a fire-breathin' man, wasn't he? The only Dem with the real gonads to call Bush the Serial Liar that he is. Everytime I watch him, he gets better. Andy, thanks for running your blog on this, and I hope like hell you are right about Al trying to save our collective ass...beside him, every other Dem looks like a bag of Minute Rice.

I'm still going with Gore/Dean. These two were against the invasion from the get-go and by 2008 it will be the main topic, bar none.

Maybe Gore can win if he gets very wise people to run his campaign. The last group was inept to say the least. He should have shown this fire then when he was attacked with smears and jokes. He didn't and appeared too weak. Guilianni has 9/11 to prop him up so Gore needs to fight hard. The other possible Dem. candidates don't have a chance.

Andy, please add this site to your others www.americanpolitics.com and check it out today, it's filled with pro Al Gore topics and more good reading about the back bone he has and what we're looking for in a leader.

If Gore continues to speak as he has been for the past couple of years (rather than allowing himself to be "handled" by media consultants, etc) then he could be a very strong candidate

Gore delivered a good speech with a lot of good points. However, it would have to be dumbed down considerably for the Red State Rubes to comprehend it. Maybe they could put the key points into a country tune and have that CHICKENHAWK Toby Keith sing it..then the slack jaws would listen.

Another run? I don't know. It would be good to watch. But, I think what happened was more a sign to Hillery that she does in fact have compitition for the 08' Dem. spot. She's been slip-slidding all over the place, and was probably in need of a good, "REMEMBER ME?"

I live in the reddest state and I'm hearing red voters saying they want to get rid of Bush and Co. Scary to think that the rubes - they usually don't think for themselves because they have a religion that does it for them - are waking up and voicing concern over the country! If the democrats can keep the truth machine running and the attacks based in fact on the GOP, there might be a much needed swing back to sanity! Keep it up, DEMS!

Red state, blue state or pink state it won't matter until we have the voting machine issue solved.

Yes, Johnny is 500% right: if the votes can't be verified, we ain't got shit. I think most of us are in some sort of denial mode about this issue, bacause to face it and acknowledge it is to admit how far down the hole the whole process has gone. Just having re-read Bush's Brain, I am reminded of how throughly these criminals have covered their bases and their tracks. For them, there is no bottom.

For all us Gore folk, check out Al's snappy fire-back to Scotty at the WH.

As for the voting machines, I beleive the main problem child is Diebold. Even after 6 years, they still refuse to make a paper trail of all votes cast. Why vote when you have no proof of who you voted for?

That's the whole point, we get a receipt from McDonalds, ATMs and gas pumps but we can't get one as a back up for voting?

Yes, here we are 6 years later and NOTHING has been done to make this nation wide.

Again, Johnny's right. We have not faced this issue. I know, I know, voter fraud doesn't have that rhetorical thrill that so many other issues do, but in your heart, you know it's the backbone, the soul, the very gut of changing the downward spiral...contact your representatives, your Senators, everyone you friggin know, and tell them how fundamental this is...for starters, go here:

Getting voting machine problems fixed is fundamental, but I still think you have to get the autopilot voters to recognise that THERE IS A PROBLEM - otherwise you're just hiding behind a yeah/but situation. Recognition and acceptance that a problem exists is the first step to change, resolution, and moving on. So part of the strategy has to be educating voters- need I say GOP voters - to recognise it and demand change...GO DEMS

If our economy survives 3 more years of BushCo, Gore definitely has the ability to topple King Clueless. But I must agree with the side topic of having reliable and honest voting equipment; without that, we're just throwing darts in the dark.