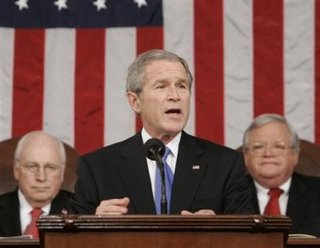 You'd think that after doing this State of the Union thing five times he'd finally get it right and say something new and meaningful. Instead, what we got was another dose of some good ole Texas drivel. Nothing more than a bunch of Rovian talking points mixed in with a few lies and lots of deception. And empty promises. And sugar-coated liberal-bashing. And I gave up "Queer Eye" for this?

This speech was classic King George. In the same chamber that he pays homage to civil rights leader Coretta Scott King, who died yesterday, he has Iraq anti-war lightening rod Cindy Sheehan tossed for wearing a t-shirt that showed the number of dead U.S. soldiers. Ain't protesting a bitch?

For openers, since when did the United States become "isolationist?" Bush used this term repeatedly in a not-so-thinly veiled attempt to thwart his detractors on Iraq. To Bush, pulling out of an unjust war that has no clear purpose and no end in site--a war that's cost 2243 US military lives and hundreds of billions of dollars--equates to "isolationism." It's just more of the Bushevik double-talk designed to twist and distort the truth. The same Crawford gobbledygook that says "you don't support the troops" if you're against the war. Or that you "want bin Laden to operate freely inside the U.S." if you're against warrantless wiretapping on Americans. No George, that's not what we're saying.

The SOTU speech was long on Iraq, 911 and keeping terrorists from moving "the battlefield to our own shores." It only took him about 320 words out of a 5000+ words speech to bring up the 911 tragedy. He invoked Osama bin Laden's name twice, the first time he's ever mentioned the Al Qaeda leader in a SOTU address. He boasted of all the terrorist masterminds captured and killed, and vowed that "for the others, their day will come." Can you say, "Dead or Alive?"

We heard a lot about how successfully the war in Iraq is progressing. Give him credit. Bush may be delusional, but he does have conviction. He's staying on message no matter what. You can almost hear him in the future, when the country implodes from civil war, boasting of how America has created an exciting new open, free society where ordinary citizens now have the right to kill each other on the streets. Welcome to Bush's modern middle-eastern democracy. Ya know, the kind of democracies "that will not look like our own, because they will reflect the traditions of their own citizens." You got that right.

And on the issue of freedom throughout the middle east, the president also boasted of gains made in Egypt, Saudi Arabia and in the Palestinian territories. Huh? Wha? Come again? Can you say, "Muslim Brotherhood and Hamas?" This is progress? The Muslim Brotherhood, certainly the type of "radical islamist" group the president warned of, is Egypt's main opposition group and its members won nearly a fifth of the seats in parliament in elections last year, their biggest ever bloc. Hamas is a violent terrorist organization hellbent on the destruction of Israel. And just exactly which "steps to reform" have the Saudis taken, as Bush stated? And while we're at, shall we even bring up Lebanon's Hezbollah? Oh, what's the use.

Mr. Texas tough guy also had some harsh words for Iran, vowing not to let them gain "nukular" (oy vey) weapons. What are you gonna do George, attack them too? As we used to say in the schoolyard, "you and what army?" Because we all know the U.S. military is stretched so thin that we can hardly fight the battles we're currently in.

Let's move to the domestic front. All we got on education, health care and the environment was, well, nothing. Bush has this uncanny ability to tell us how he's going to shore up all these areas at precisely the same time he's cutting them. It's pure Rovian theatre: Tell 'em what they want to hear, and then do what you want anyway. They're too dumb and uninformed to know the difference. Regarding the economy, as always, everything's great. Record deficits, record gas and oil prices, declining real wages, lackluster consumer spending, rising inflation and interest rates, and declining GDP...yup, that's just the way we like things. Thanks George.

And out of a 500+ word speech, Bush talked about Hurricane Katrina and repairing the Gulf Coast for a mere 160 words. At the end of his speech. This is how he addresses the worst natural disaster in America's history? Vague promises about aid and rebuilding, and poetic talk of all Americans "protected by justice, equal in hope and rich in opportunity." But ask most local politicians down there and what you'll get is nothing but anger and frustration over the government's abysmal response to the disaster and it's aftermath.

Or what about his profound declaration that "America is addicted to oil?" Considering that he, his family and people like Dick Cheney are the biggest pushers of this drug, can he honestly be taken seriously here? The Busheviks have given the oil companies carte blanche to not only self-regulate, but to earn staggering mega-profits like the $34 billion (yes, you heard that right) Exxon Mobil reported Tuesday. As long as there's a Bush and Cheney, there'll be an addiction to oil.

Another year of Bush, another SOTU speech and another opportunity for the mainstream media to take apart the lies and deception and hold up a mirror to this inept presidency. Think they'll do it? Not a chance.
Posted by The Ostroy Report at 8:14 AM

Who, who, who was responsible for choosing the Republican Lite governnor of Virginia to represent the Democrats, for no other reason, that I can see, than he was elected in a Red State? When will whoever is running the show learn that a little bit left of the Republicans is not the way to win the presidency. Even Hillary was smart enough to vote for the filibuster. When will the Dems in charge wake up and see what the polls are telling us?

The best part gang is, our own Republican Representative Bill Young’s wife was escorted out last night from the SOTU. She was 6 rows from Laura and she was wearing a T-shirt supporting the troops. She went bitching but they took her ass out none the less. This morning’s St. Petersburg Times quoted her as saying, “Wait until the President hears about this”. The officer that took her out said that if Cindy had to go so does she.

Congrats to that officer for not playing politics.