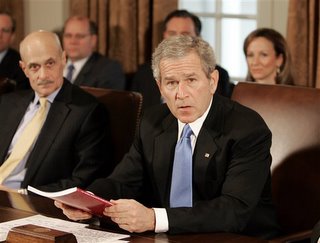 In a newly released Rasmussen Reports poll, 43% of Americans said they want Congressional Democrats handling national security while only 41% prefer the Bush White House. Additionally, 64% said they are opposed to the Dubai Ports World deal to take over operations at six major U.S. ports.

As for the highly controversial deal itself, DPW, the state-owned United Arab Emirates company that's paying $7-billion for the Miami, Baltimore, Philadelphia, New Jersey, New York and New Orleans gateways, has requested a 45-day investigation in order to allay Americans' concerns. After a week of intense battling on the Hill between the Busheviks and Congress, the UAE has requested something that's already been mandated by law. There's a twisted irony to this whole mess. That four years after the 9/11 attacks an Arab nation has to volunteer for a legally mandated review in order for it to happen at all only goes to show the colossal flaws in our homeland security.

How is it possible that the mandatory 45-day investigation was not carried out? How is it possible that this administration is once again allowed to arbitrarily decide whether or not to obey our nation's laws? For four years they've drilled into our heads that we're at war with radical Islam; that the war on terror is our number-one priority. And then without any significant investigation whatsoever the Busheviks go ahead and approve the sale of operations at six major ports to an Arab nation that's had ties to Al Qaeda; has supported the Taliban; has failed to recognize Israel; and has been a stopover for drug traffickers and money-launderers. This was and is a blunder of epic proportions. No wonder Americans are losing faith.
Posted by The Ostroy Report at 9:26 PM

I like that the initial review is so secret that we can't even find out who conducted it. This makes me wonder whether it was done by a bunch of Michael-Brown-type incompetent cronies or by agency professionals too afraid to buck the desired outcome of the administration. This thing, like many others, stinks so bad that the smell test is rendered moot.

This is just like usual SAME O crap.
We know bush had a hand in getting the arabs to hold off for45 days togive his congress fools a little time to think it over.He knows in the windup theyll vote for it,being he tells them to. Frick is already telling on tv he just wants to look it over.Hillary and the Democrates are running their mouth again. There aint a one of them thats got enough guts to say Hell no and stand by itand arest him for breaking the law.Instead they blow off impeachment and the people let them get away with it ,it can only get worse.not better, Bush is going to clean up while they waste there time in afghanistan with his dope money

T0 the person above: The Dems have no power to do anything much in Congress. Why? They do not have the numbers. Repubs run it all. Repubs have meetings where Dems are not invited. Repubs do not give one hoot about working with the Dems except in maybe the Senate where votes tend to carry more weight.

Dems do speak out but they do not have the media either. They do not have the platform. Watch C-Span to see how hard they are working. Are you getting the picture? They need more Dems in the House and Senate to make real changes.

I hope no one gets excited about the poll that shows the people want Dems in charge of security. Many Repubs are in safe district seats that were drawn by the states that were run by Repubs. The lines were drawn to favor them. This is how it's done. Dems have made progress in the states (Governors & legislatures) so down the road we should see better district lines.

So we have to work like crazy to elect Dems in the seats that are competitive. I am hoping we pick up enough seats to force the Repubs to work with us to pass legislation. Then again, I worry that the Repubs will cheat. If so, "we the people" lose big time.

Personally I think it is funny that the DPW is actually the one who called for the 45-day process. I think it shows up the White House.

I question if it really was the DPW who called for the 45 day review. It seems more like it was the White House working behind the scenes to save face.

Don't trust much of what comes out of this White House.

So what if the "American people" are losing faith. It's about time. And, again, so what if they finally have. They still do nothing. There's is no huge outcry. There're no sit-ins, marches, letters to the editor, boycotts of inadequate networks and newspapers, etc. They write their emails (as do I) and gripe. Every citizen who lives near a port should be yelling in protest (and fear.) And, so what if the Dems are powerless. What difference does it make with the likes of Lieberman, Hillary and Biden who talks the talk then backs down "reluctantly." They are useless.

cathy said "Then again, I worry that the Repubs will cheat."

Let's work for requiring photo id's at elections to keep those 'Repubs' from cheating!

to keep the repubs from cheating, lets start with the machine, paperless? come on.

also, we should be voting on more than just the men and women, but also some voting to guide our elected officals in the direction we need them to be voting on the issues. they are OUR voices, and all they seem to be doing,is running around DC making themselves rich.

finally, way too many people dont care about a dam thing. Obliviouse to whats going on at our ports, and have been told not to worry too much because following the reports of the port issue are reports about george michael being arrested.

"to keep the repubs from cheating, lets start with the machine, paperless? come on."

We don't want to limit ourselves to one method of election fraud prevention. Let's go for the whole spectrum: machine auditing, photo ID requirement, making sure our military folks get their votes counted, centralized registry tracking so people can't register in more than one place, a mandatory registration period of 30 days before the election, absentee ballot reform.

If we are going to prevent fraud, let's go for a comprehensive solution; not just our pet issue.

FROM SCANDAL AND CRIME SCENE THE "LAME DUCK" 'BUSHEVIKS'
WALK.
IN TIME, THEY MAY EVEN "FLY THE COOP".

Ahhh, Popeye keeps coming back for more and it's obvoius he STILL doesn't get it about his beloved Republicans.

All I have to say, and have been saying to Republicans a.k.a. Bush Lovers, for years is tell me five things that this President has done in the past SIX YEARS that has made the life of the average American better. The sad fact is that people like Popeye never repond, NEVER! The main reason is that Bush has been in office 6 looooong years and has done absolutely NOTHING so how can his followers brag about their leader.

Let's face it, Popeye is about as insightful as Bush, and so it's no wonder the conversations go nowhere. At least he talks "facts" now which is a vast improvement over last year.

Intelligence Style for Pops and Bush? Hmmm, Brickwall comes to mind. Brainstorms? Neither one has appeared to had one since, oh, 19, uh, 1969. Popeye says he's not a KoolAid drinker, but crack users say they're not addicted, also.

The sad thing is - each one of these guys believes his own bullshit.