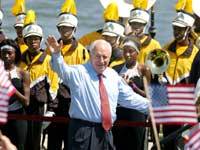 In a statement released Tuesday morning, the White House said that the accidental shooting by VP Dick Cheney of 78-year-old Republican lawyer Harry Whittington was no accident, and that the near-octogenarian is really Ibin al Quaili, the #3 leader in Osama bin Laden's Al Qaeda terror network. Bush officials also explained that the almost 24-hour delay in officially issuing a statement on the shooting was intentional and necessary, and in the interest of national security, "something those wussy Democrats don't understand," said President Bush, who added that the delay was also crucial in allowing law enforcement officials to confirm al Quaili's identity and conduct bedside questioning of the heretofore elusive terrorist.

"Dick Cheney's a hero, for God's sake," said President Bush. "He first learned of al Quaili's true identity a day before the Texas hunting trip and insisted on personally overseeing the covert mission to capture and kill the dangerous terrorist. When al Quaili lunged for the veep, Dick turned quickly and shot the crazy A-rab full of good ole' fashioned Texas birdshot!"

The Bushies said that the membership ranks of the Al Qaeda terror network have been swelling lately with non-traditional operatives hellbent on carrying out the sadistic suicide missions masterminded by bin Laden. Both the CIA and FBI, as well as the Department of Homeland Security, report an appreciable increase in suspicious activity and "chatter" by pasty old white middle-America-looking senior citizens suspected of having ties to the Al Qaeda leader. You see them at the airports, where, thankfully, these wrinkly Depends-wearing 90-year-old fakes are stopped and interrogated time and time again at the X-ray machines before they can do any harm to us. The White House said that Wittington/al Quaili was the leader of this extremely ruthless new senior-cell.

A foolish accident caused by a semi-senile unlicensed vice president who then botches the reporting of it? Yeah, right. Guess again. It's the tough-as-nails Bushies fighting to protect America once again. God bless them, and God bless Dick Cheney.

BTW, Congress has just approved the Bush request for full-scale wiretapping of the nation's nursing homes.
Posted by The Ostroy Report at 9:29 AM

There's no doubt that the Republican newspeak machine will turn this into a plus for Dick. He'll be able to wear this as a badge of courage when there done.

Either that, or THE DICK has taken on TORT REFORM, and he's gonna do it ONE LAWYER AT A TIME