Home, Home on the Range. But the Stench of Controversy Has Followed Cheney All the Way to Wyoming 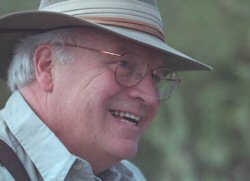 Vice president Dick Cheney's back in Wyoming, Harry Whittington's back home in Texas, and everything's back to normal, right? Guess again. The Birdshot Incident clearly drove the wedge further between Cheney and President Bush. My bet is that these two make Alec Baldwin and Kim Basinger seem like lovebirds.

The Iraq war is a disaster, and many Bush insiders blame Dick Cheney & The NeoCons (unfortunately, not a rock band) for getting them in this mess. The CIA leak case is far from over, and new allegations have recently been made by Scooter Libby accusing Cheney of ordering him to leak classified WMD data to the press. All of this has kept the president from being able to get out there and push his political agenda. As icing on the cake, Bush's approval rating has slipped back below 40% as result of the lingering controversies and scandals, all of which have Dead-Eye Dick at the epicenter. Do we need to even ask if Bush is happy with Cheney?

The most powerful vice president in the history of the office is perhaps too damned powerful for his and Bush's own good. He acts with complete autonomy, and appears uncontrolled by the president. Speaking on MSNBC's Hardball Friday night, commentator Joe Scarborough said "this is one of the most disturbing parts of the story, that the vice president has so much power that he doesn't feel like he needs to tell the president of the United States that he blasted a man in the face with a shotgun!"

And in the Wall Street Journal Thursday, conservative columnist and contributing editor Peggy Noonan wrote that Bush insiders are most likely already planning for the day when they seek to replace Cheney. "I suspect what they're thinking and not saying is, 'If Dick Cheney weren't vice president, who'd be a good vice president?' They're thinking, 'At some time down the road we may wind up thinking about a new plan.' And one night over drinks at a barbecue in McLean one top guy will turn to another top guy and say, 'Under the never permeable and never porous Dome of Silence, tell me . . . wouldn't you like to replace Cheney?'

She added, "Why would they be thinking about this? It's not the shooting incident itself, it's that Dick Cheney has been the administration's hate magnet for five years now.... But, at a certain point a hate magnet can draw so much hate you don't want to hold it in your hand anymore, you want to drop it, and pick up something else."

And that something could look very much like Rudy Giuliani.
Posted by The Ostroy Report at 9:47 PM

We Dems better hope Bush is afraid to fire Cheney because a new vice president, such as McCain or Guiliani or whoever, would have a boost toward winning the presidential election. I read somewhere that Bush is afraid to anger Cheney because he knows where the President's "skeletons" are. I personally don't think Cheney would expose Bush because it would hurt the Republican party. However, nothing that crowd does surprises me. What does surprise me is the number of people who still susport this president, Cheney and this administration. Is it the old "birds of a feather ... "?

They have Mafia loyalty. As long as they are successfully stealing our treasury and everyone in the cabal is getting obscenely wealthy, they will stick together.