"Dickie, You're Doing a Heck of a Job" 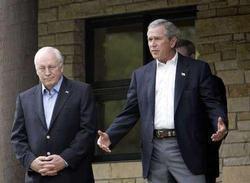 Speaking to reporters Thursday afternoon about The Birdshot Incident, President Bush said, "I thought the vice president handled the issue just fine." Sound familiar? Can you say Michael "Brownie" Brown? The president sure has a knack for rewarding colossal ineptitude, doesn't he?

Bush's praise of Dead-Eye Dick continued: "I thought his explanation yesterday was a powerful explanation....a very strong and important explanation to make to the American people." The only problem with all of this political poppycock is that the president's body language during all this screamed miserable and irritated. He's clearly miffed at his underling for waiting so long to personally inform him of the accidental shooting Saturday afternoon in Texas. And the ensuing four days of Cheney's bizarre silence added insult to injury.

I'm not so sure Bush's misguided support for his veep, in the end, will be remembered as such a good thing for Cheney. We all know what happens to administration officials who reap Bush's praise. If this were the Mafia, it'd be the Kiss of Death. It's like Michael Corleone to his brother Fredo: "I know it was you, Dickie. You broke my heart. You broke my heart."

The post-shooting handling was a botch-job in true Bush & Co. fashion. Think about how they've handled the war, Katrina, Rita, FEMA, the budget deficit, social security reform. Is it any wonder they've failed miserably with Birdshot damage-control as well?

If you listen to the Bushies and their nauseating legion of ass-kissing conservative spin-monkeys, the whole episode makes perfect sense. Cheney had to wait all that time to inform his boss and the media because his first priority was "the care of Henry Whittington," as The National Review and others stated. Additionally, the veep had to wait because there were "too many conflicting accounts" of the accident, as Cheney's flak Mary Matalin claimed. Bullshit, I say. Double-bullshit, in fact. This crap is an insult to our collective intelligence.

First off, exactly which medical school did Cheney go to? Will someone on the right please tell me how a speedy statement to the president, police and press would've harmed Mr. Whittington in any medical way? There are doctors to care for your victim, Dick. Your job is to level with Americans and leave the medical care to the professionals.

Next, can someone on the right also please explain to me how this "conflicting accounts" excuse forced the almighty vice-president of the United States to remain mum, yet ranch host Katharine Armstrong was more qualified than Cheney to handle the "confusion" with the media? Do these talking heads ever listen to the unsubstantiated nonsense that spews from their mouths?

And as for the overall credibility of Armstrong, who was presented as an "eyewitness" to the shooting, she later slipped up when saying she saw Cheney's Secret Service detail rushing towards the veep: "The first thing that crossed my mind was that he (Cheney) had a heart problem." Now had she truly seen the accident she of course would not be worrying about a Cheney heart attack.

On a curious side note, by the way, the ranch is owned by Armstrong's mother, a Halliburton board member who just happened to be among those who hired Cheney as CEO back in the 90's. Oh, what a tangled web the Repugs weave.
Posted by The Ostroy Report at 9:42 PM

You're an idiot. Hunting mistakes happen all the time. Too bad not to you.

To the above right wing nut case anonymous(too chicken to identify craven self,) yes hunting accidents are common. I once saw a school teacher that had his head blown apart on the opening day of deer season. Hunting is popular here in Texas where I live.
That doesn't excuse someone for being an idiot and shooting a hunter in his own hunting party, or any other hunter, or livestock, or pets or distant persons, which does happen.
Why did they wait so long to report the incident? Were they three sheets to the wind? Karen Armstrong's story is now shown to be as full of holes as is Mr. Whittington.
More lies and deception from this corrupt,lame and elitist administration.
On one of my blog entries I have proposed an annual award, "The Brownie." As it is delivered to its worthy recipient the award giver will pronounce those immortal words, "You're doing a heckuva job!"

Am I the only one who is discouraged when it comes to this administration? No matter what they do or say it's okay.

I don't get it. We were once a great country and those that support the Repubs will rue the day they kept supporting them. By then it will be too late and the rest of us are going to pay for Americans who refuse to hold them accountable.

Cathy my dear you are NOT the only one upset with the administration. Bush’s poll numbers are once again tanking and he is doing NOTHING to help this situation, NOTHING!

I have a wonderful time telling anyone that even mentions Bush as being “okay” that I want to know what this President has done in the past 5 years to make this country better. Sure you get the same old, “I’m safer” crap but that’s when I get to them. I ask them to tell me ONE thing that he has done to make life better for the average American, ONE friggin thing in the past FIVE years. To this date I have NEVER had anyone come back with an answer, not ONE. I have been asking this very same question for years now and even the so called smart Republicans can’t come up with an answer. Why he has even a 39% rating is beyond me but I think the people of this country will wake up from a 6 year sleep by 2008 and I hope by this fall.

Here in Florida we know full well about voter fraud, I hope it doesn’t happen again this fall and 2008.

HAVE YOU HAD ENOUGH YET

Don't count on relief with the 2006 Elections. Many of those running are in safe seats so there will be no change in those districts. Although Dems have been making inroads in the States including governors, the district lines (except for Texas) were drawn by Repubs.

So all will be won or lost in a few marginal districts. We must work like hell to win those. I can only hope to pick up enough seats to slow down the Repub agenda.

PS: Also ballot measures here in Michigan will bring out voters who want to do away with affirmative action (pushed by outsiders) and if it gets on the ballot here, a rise in the minimum wage. Remember how the Repubs put gay marriage on the ballot to bring out the homophobs? Same same.

To Cathy,
Unfortunately the congressional districts here in Texas were drawn by the Republicans.
It happened a few years ago, instead of every ten years as was done in the past. There was much gerrymandering going on as the Republicans, led by U.S. Congressman Tom Delay,who had no business getting involved in this, proceeded to change the face of the Texas Congrssional elections.It was a long and colorful battle, many Democrats left the state to prevent a quorum being present in the state legislature to prevent the re-districting from taking place, but eventually the stagte GOP got there way.
The new lines disenfranchised Democrats, Hispanics and blacks.
More sorry shenanigans!