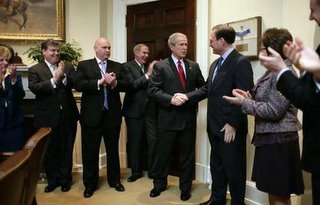 Samuel J. Alito was confirmed 58-42 on Tuesday, and sworn in as the nation’s 110th justice on the Supreme Court, thus joining John Roberts Jr., Antonin Scalia, Clarence Thomas and Anthony Kennedy to comprise the most right-wing majority in the high court's modern history. Note the 42 votes. That's one more than was needed to filibuster this extremist judge. I cannot for the life of me fathom how these Senators (all Democrats save RI's Republican Lincoln Chafee) could vote "no" for confirmation but not support a filibuster. But then again, it's been a very long time since I understood the Democrats' overall strategy.
Posted by The Ostroy Report at 2:43 PM

They can campaign on the fact that they voted no on Alito.

They showed the American people again that the are irrelevant. Time for new leadership, or a new party.

Strategy? They have a strategy?

This is called the John Kerry strategy. Actualy, you see, they voted "FOR" Judge Alito before they voted "against" him. Just like Kerry explained his voting "for" and "against" the War Against the People of Iraq. You would have to be a modern-day Democrat to understand how this makes them appeal to everyone. That is why they win so many elections.

Good blog. The congresspeople all want to keep their jobs (power) and get rich (or richer). I changed to the Green Party after 2004 losses - had been a Dem. forever, but nevermore. We badly need a third party to challenge the others and keep democracy alive. If all disaffected Dems moved to the Greens that would make SOME party! Let's get busy and choose a slate of candidates.

The cloture vote told us at least 15 Democrats supported Alito's confirmation. We don't know about the rest since they may have felt compelled to vote against Alito to appear progressive to their constituents. Voting for cloture in a progressive district might have caused a rebellion.

"Our mission is to help Democrats regain the White House and Congress."

"But then again, it's been a very long time since I understood the Democrats' overall strategy," doesn't add up.

How about, "Our mission is to remove Bush & Co. from the White House, and their supporters from Congress"?

Personally, I'll waste no more time, or votes, on Democrats (at least the ones who voted for the invasion of Iraq!).

They can still vote no after having wetted themselves at Dear Leader's request. Can't filibuster after you've peed your panties...

"We badly need a third party to challenge the others and keep democracy alive. If all disaffected Dems moved to the Greens that would make SOME party!"


we had the chance in 2004, but michael moore, bill maher and every other "lefty" were out there pressing people to, "vote for kerry because he isnt bush"

2004 was the election that everyone should have shown a greater respect to the "third party", instead most people sought out help from the democrats, but john kerry just extinguished any hope of escape from bushco, conceding to his fellow bonesman, even faster than gore.

you missed the peak.

You don't get it. The game is rigged. There is no one to vote for or against. Democracy in America ended in the year 2000 when the supreme court appointed the fellow who lost Florida president. In 2004 the same fellow rigged the voting machines in Ohio to continue his presidency. And this was all done with the complicity of the Democrats. No amount of pissing and moaning on blogs will change anything. America is over.

Republican, Democrat, Green, Independent or Nudist Party (the only party that has NOTHING to hide). Makes not difference until the voting machines are fixed (they are already), repaired.

Until we have a paper trail to back up every single vote the elections are nothing more than a "feel good" exercise.

Mugwump said...
"Our mission is to help Democrats regain the White House and Congress."

"But then again, it's been a very long time since I understood the Democrats' overall strategy," doesn't add up.

Sir Mugwump:
Separate my feelings of frustration from my desire to see us regain power. The two are mutually exclusive.
Andy

A lot of us are disgusted with a any number of individuals in our Democratic leadership. But, I fail to see how a third party might help things.

Now, an organized third force...,that would be something!

note ...all five "justices" on the right are conservative catholics ! now that Kennedy is in the middle they describe him as a moderate.


lets be clear .. the so-called moderates.. Kennedy and O'Connor ..gave us the Bush predisentcy. If Sandra Day had not "dated" Renquist ..shades of hollywood..would she have "made"it to the Supremes? Paulo Albany Ca

You know what happens if the progressives leave the Democratic Party? The ones who are left are the ones who choose our nominees. The party moves farther and farther to the right as they compete with the Republicans to see who can be more far right.

That's already part of the Democrats' problem - that too many progressives thought this was the answer years ago. The more of them leave, the worse our choices get.

You will never make them see the light by leaving them behind. You can only change the party by being an active part of it.