Will Democrats Mock Cheney Like the Repug's Did Dean, Kerry and Others? 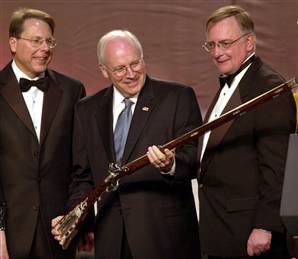 In the days and weeks following Howard Dean's now infamous "I Had A Scream Speech" Republicans and the right-wing media machine had a field day tearing him apart as some angry little crackpot not worthy of a McDonald's job let alone the highest office in the land. When John Kerry was photographed windsurfing the Repug's demonized him as an elitist buffoon. Time after time, in response to a statement, picture, event, etc, conservatives in this country mock those on the left through highly disparaging and vituperative comments designed for one purpose only: exploitation, denigration, character assassination.

As luck would have it, some might say, VP Dick Cheney handed the left a gift horse over the weekend by shooting his hunting buddy, 78-year-old Harry Wittington, in the face, neck and upper torso with a 28-gauge shotgun, apparently mistaking the major GOP donor for quail on a friend's South Texas ranch. Too good to be true, right? Ya can't make this stuff up right? But what's the point? Democrats will leave Cheney unscathed, relegating this episode to just what it is: an unfortunate mistake. Why? Because we're civil. Because we do not subscribe to the school of personal attack. And because some things, like the near-tragic shooting of an elderly man, are not to be exploited or mocked simply for political gain.

But, can you imagine if the proverbial shoe was on the other foot and it had been a controversial Democrat who pulled the trigger instead? A lefty lightening rod like Dean, Kerry, Ted Kennedy or, heaven forbid, Hillary? He/she'd be vilified and hung out to dry by a venomous right wing conspiracy. The classless jokes and mockery would be relentless and merciless.
Posted by The Ostroy Report at 2:55 PM

Oh like everything else this administration does or doesn’t do the conservative media sweeps it under the TV. You are correct Andy, when Dean screamed it was all over the media, when Hillary used the “plantation” word, she was ANGRY, when Bush screws up hourly the media would rather spend time on a stupid murder that no one cares about. There is no such thing as a “Liberal” media every bit of it is CONSERVATIVE, does FOX and CNN ring a bell? Can anyone mention one Liberal network, I sure can’t think of any.

There is just so much corruption coming from this administration that we’re getting jaded to it and so is the media. They just don’t know what to report on next there is so much going on with those crooks.

HAVE YOU HAD ENOUGH YET??

Please let's mock the hell out of Cheney. Yes.

Cheney shot Wittington on a ranch just about 40 or 50 miles from where I live. As you can imagine it has been big news but the spin machine is in effect big time and our local media is just eaten up with it. They are easily led by the nose and manipulated by it.
They are painting Wittington as the at fault. Anyone who has hunted or used guns at all knows the first rule is to be sure of your target before you fire.
This gang truly can't shoot straight, can't tell a high priced Austin GOP donor lawyer from a quail!

Even my repuglican colleagues can't wait for Letterman!

Forget about Cheney. If Hillary ran a red light and killed her ex-boyfriend when she was eighteen, would we ever be allowed to forget it? You're right, we're too damned nice.

It's time to stop being nice. The RepubliThugs are evil and beneath contempt -- they will do anything to destroy freedom, liberty and democracy because those American values oppose theocracy and fascism.

You forhget America's #1 rule (now that the Bill Of Rights is kaput):


I watched a WWII movie tonight with a lot of Nazis in it.

The cruel, self-righteous Nazis, again and again, reminded me of Republicans.

Came out of the same mold, for sure.

I say pillory the bastards. Let's face it, the White House brand has been tattered and shred to pieces, and with poll numbers in the 40s for almost a year, it's about time.

Just like folks laughed at Jimmy Carter and Jerry Ford, I say let the cackle and merriment start.

Sorry folks, but "niceness" does not win elections. Until Democrats go on the attack and are willing to fight and claw their way back into the public confidence, they'll continue to lose election after election. American's may not like attack politics, but they hate wimps even more.