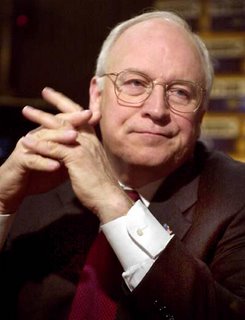 I am going to go out on a limb here, just as I did last year when predicting that Chief Justice William H. Rehnquist would have to be carried out of the Court before he'd let illness force his retirement. On the heels of The Birdshot Incident, I hear the clock starting to tick loudly for Vice President Dick Cheney. The PR, political and ethical fallout over this mess is mounting, and it will be impossible for Dead-Eye Dick to overcome. The office of the vice president has become a joke, and Cheney is no longer able to efficiently perform his duties with any legitimacy. There's a dark cloud hanging over the Dwight
D. Eisenhower Executive Office Building.

To be sure, President Bush must be downright livid at the way the veep handled the post-shooting damage control process. In fact, it was no process at all. No damage control. Just lots of mystery shrouded in secrecy and with a layer of the all-too-familiar Cheney arrogance thrown in for good measure. The veep has made the prez look like a fool who cannot control his renegade subordinate. And we all know that Bush likes things his way.

Cheney's been on the hot seat for a long while now. He's taken heat over his obsessive pre-9/11 war mongering which led to the Iraq invasion. He's been taking heat over his purported role in the CIA leak case. More recently, he's at the center of new allegations by ex-aide Scooter Libby over his directive to leak classified data about Iraq's WMD to counter the negative press spawned by Joe Wilson's NY Times Op-ed which disproved the Busheviks' weapons claims. The Birdshot Incident will be the last straw, mark my words.

I'm not sure how long it will take Rove & Co. to concoct the perfect out, but Cheney will soon be replaced with someone who will not just divert the heat away from Bush over this matter, but who, more importantly to the GOP as a whole, will also help set the stage for the 2008 presidential election. Can you say Rudy Giuliani?
Posted by The Ostroy Report at 2:08 PM

Great. Now we get Condi. I'd rather we had Dick to kick around.

Has it seemed to anybody else that Dick isn't so...involved in his job lately? I mean, seriously, where was he before this? I too wouldn't be surprised if he took this as an opportunity to retire.

HuffPo has an article that the Swiss Ambassador is Cheney's mistress. Now let's see how the 'family values' rubes act.

Dick will leave when they carry him out. Not a second sooner. The Shrub won't be leaving either. We've seen the last Presidential election.

It does seem strange to be elevated to the post of Ambassador to Switzerland when one's claim to fame is Texas higher education something or other. And she appears to be single. Two men, two women, no spouses. Hmmm. Maybe Cheney was putting off letting his wife know where he REALLY was. Just more Republican hypocrisy.

Something tells me Cheney's not gonna go that easily. Without a doubt, he knows where the Dubya bodies (AWOL, DUI, etc.) are buried, and he's enough of a bastard to leak them if he's threatened. Don't count your quail before they're shot.

Yeah, sure, the narcissist Bush will tolerate the narcissist Giuliani. Not likely. What Bush will want is someone like Condoleezza Rice or Harriet Myers who kisses his feet and likes it. He might compromise on that; however Giuliani would be an explosion waiting to go off.

What makes anybody think that Bush would care? This seems to me to give him way too much credit. In fact, he has as little solicitude for the feelings of the American public as he does for those of the international public.

For all we know, he was involved in a decision to hold back the news until such a time as a cover story was concocted.

That's if he wasn't falling around drunk at the time or groping Jeff Gannon.

By the way... I'd hit it, not after Cheney though.

C'mon, now you're getting ridiculous.

Nothing will happen to Cheney, except to rally his supporters even more. In fact, anyone who continues to question what happened will be attacked and slimed.

Nothing will happen to him for telling Libby to out Plame.

Nothing will happen to Cheney for performing unConstitutional domestic spying and for now creating the new law that makes it legal.

Nothing will ever come of Cheney's secret energy task force.

It will take two generations before enough true Patriots are willing to take to the streets in order to remove these criminals and restore our Constitutional Republic.

Until then, it will get much worse. See you in a caged free speech zone coming to a town near you!

yep. I agree, it's far too late now...not enough of us to take to the streets with our pitchforks we are toast and the koolaid drinkers win...fuck that shit.

Bush Loves Cheney said he gave a "strong, forceful explanation over what happened" so there ya go.

Our country is no longer a free America, fuck you bush lovers.