The Democrats Need Help to See the Awesome Domestic, Foreign Policy and National Security Platform That's Right in Front of Them 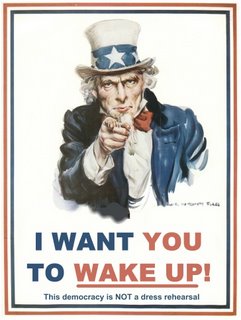 Is there anyone out there who could connect me to someone influential in the Democratic Party? I can no longer watch my fellow Democrats floundering in a sea of ineptitude. My beloved party is lost, and it's painful to witness. We're a ship without a captain, and we seemingly have nothing important to say. I can no longer accept our party's leaders not screaming what should be a very clear message, one that seems so obvious to me. I can no longer watch the party blow one of the most incredible opportunities to regain power in modern political history.

I want to help shape the party's message this year, and I want to help us win back the House. Given the GOP's growing turmoil and voters' clear dissatisfaction with the Bushies and the overall direction of the country, this should be a cake-walk. Unfortunately, the party right now seems incapable of fighting its way out of a paper bag, let alone go head-to-head with Karl Rove. So I'm scared; scared that we are following the same path as 2000 and 2004.

I've never been a political consultant, and that's exactly why I can be an asset to the party. The Dem's--from Gore to Kerry--have already had way too much bad advice from the "professionals". What the party needs is a marketer who understands merchandising and branding. And someone who can craft an exciting, coherent message. A message that speaks the truth and resonates with voters. Call me cocky, but I can do that. And marketing is my business, and has been for 24 years. And let's face, I can't do any worse than the "pro's."

We as a party have a lot to be proud of. We have always been the people's party. We create jobs, and protect workers. We help Americans put food on their tables; provide medical coverage; educate their children; care for them in retirement. We protect the environment, and cherish the arts and diverse cultures. We respect freedom, and hold sacred the separation of church and state; the separation of powers; and the rule of law. We are a party whose sons and daughters fill the ranks of the U.S. military, while many others use wealth and family connections to avoid service. So what's the problem here? Why can't we convey all this to voters in a manner that drives them to our polls? Especially as the GOP dwells on lower taxes for the rich, more war and banning gay marriage.

As the NY Times reports on Wednesday's front page, high-ranking Democrats are worried. And they should be. They are being handed the House on a silver platter, and they still can't grab the prize. The Republican Party is rocked with scandal, corruption, cronyism, failed war, illegal spying, sagging economy, runaway gas and oil prices, record debt and Osama bin Laden tapes. Can't get much worse for them, right? Well then what the hell is the Dem's problem?

The Times says party officials believe the GOP has the leg up on national security, a major problem for the Democrats. Why should this be? Bush has made Americans less safe, not more. And every time we see bin Laden's mug on TV it's a painful reminder of that vulnerability. Let's once again re-visit the Bush/Cheney track-record on "protecting" Americans:

My God, is this not enough of a miserable record on which the Dem's can mount a successful offensive against the Busheviks? What's missing, martians invading the Capital?

Sen. Evan Bayh (D-IN), in a speech to the Center for Strategic and International Studies, suggests that homeland security, which has been Bush's campaign strength since 9-11, become our calling card as well. "I think the Republicans are ripe for the taking on this issue, but not until we rehabilitate our own image. I think there's a certain element of denial about how we are viewed, perhaps incorrectly but viewed nonetheless, by many Americans as being deficient on national security. As Democrats, we have a patriotic duty and political imperative to lay out our ideas for protecting America. Frankly, our fellow citizens have doubts about us. We have work to do." Amen, brother. Now let's get to work. I am ready for service.
Posted by The Ostroy Report at 7:32 AM

I think we need to be able to go toe-to-toe with Karl Rove and the rest of the GOP disinformation and noise machine. We should not be afraid to take these traitors on when it comes to national security and even faith (I wonder how many Christians who take the Bible seriously may have heartburn when they find out how Bush and his friends used them like pawns in two elections only to betray them and their principles when it has come to economics, ethics, and foreign policy).

Andrew Sullivan put it this way, "I'm not a Democrat and don't think I ever could be, but here's what I'd say if I were in opposition right now. These guys are corrupt and incompetent. They have screwed up the Iraq war, turned FEMA into a joke and landed the next generation with a mountain of debt. We're for making the homeland safer, winning back our allies, and taking on the Iranian dictatorship. We're for energy independence, universal healthcare and balancing the budget again. Now, let Rove do his worst. Hey, we need Democrats who relish the fight, not timid ones who cower at the prospect. Bring back the happy warriors. Please."

Andy -- From your mouth to the Dems' ears. And, as well as your abilities and the Dems finally fighting back, what is needed is an appealing Democratic Candidate to beat, who I think will be the opposition, John McCain. He's not-like-them enough to appeal across party lines and yet keep the Republican vote. I don't see any Democrat with McCain's vote-winning assets. I would never vote for a Repulblican but I don't think I'm in the majority.

This is to the gal looking for a job to market ideas for the Democratic party--- theyve got nothing to market,they are like the republicans Crooks liars Con artists.and the likesfrom the top down and all of congress should be in jail,All their after is donations and what they can steel.
The quicker We can put this bunch behind bars the better.Do away with
both parties and come up with 6 parties or none, either way.anything crappy Bush comes up with they are down on their knees looking upto the republicans and will vote for anything.In the last 5 years They voted right down the line for anything Bush thought of.
then try to lye out of it by saying they cant read ,We got people drawing ninum wage that are smarter than the congress not drawing over 230,000 a year.
Here a tipical example on this Alto deal I was told to wright the congress,30 days later i got a email from Hillary saying she was working for the people of NY.and hear the other day one from Lieverman saying saying he so busy,working for the people of connectute and the rest could go to hell.So I am sure going to donate to this kind,The only to stop Bushes crazy ideas is for this country to have a tax revolt.so they can see that money dont come off trees.and there funny money dont cut it.

maybe the democrats and everyone else should watch
"loose change 2"
and if you cant figure out what to do after you have seen it, then you deserve the democratic party.

they know,they ALL know,
and none of them care. its tit for tat on health care and gas prices, while our country has been hijacked by the neo cons.
we need leaders and there are none to be found.

This is slightly off-topic...

But Holy Crap... how does Tom Delay end up on the f'ing Appropriations Committee??????

The Dems have been hypnotised, that's all I can think of. Don't laugh. When get punched around or fed too much bullshit they become very suggestible. So the Dems end up standing around responding to the GOP agenda. What they've got to as Driftglass says so clearly: " So quit whining and hit them already."

Quite a litany of abuse you have put together. It cries out for action but where I live a lot of people still think Bush is doing a great job,don't ask me how they could be that way, it's beyond my understanding!
The Dems are timid, there is little fire and Howard Dean provides most of that!
I don't have a suggestion now but I am feeling the same way you do and I am going to do my utmost to derail these GOP authoritarians, ayatollahs and martinets.

Evan Bayh? EVAN BAYH?!! You've got to be kidding! If there ever was a gutless, me-too DINO it's Bayh. He runs around the country undermining liberal Democrats. Bayh and his fellow DLC types (Joementum!) have grabbed control of our party and steered it straight into the toilet.