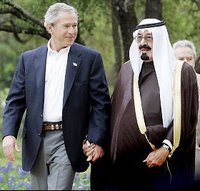 The NY Times Wednesday reported that under a 1993 amendment to existing foreign investment law, the U.S. government is required to conduct a mandatory 45-day investigation if the investing company is owned and/or controlled by a foreign government. The key word here is mandatory. During this period, Defense, State, Commerce and Transportation department officials, along with the National Security Council and others, would get to put the deal under a microscope, ultimately reporting its findings back to the president. And, Congress would also have the opportunity to more deeply vet the transaction. But the great Bushevik Monarchy once again skirted the law. King Bush once again declared that "I am not above the law, I am the law." The most secretive administration in United States history has once again just flexed its unitary powers, telling Americans and Congress to screw off. So much for mandatory.

Last time I checked, there are three equal branches of government. Yet this is something the Busheviks have yet to recognize and respect. They govern unilaterally, with reckless abandon and with blatant disregard for the rule of law and a general disdain for checks and balances. On an issue so sensitive as homeland security, it's unfathomable that Bush did not confer with Congress prior to authorizing the sale of operation at six major U.S. ports to a state-owned company of the United Arab Emirates. This administration has consistently circumvented the legislative branch in order to push through its aggressive agenda. This time it's backfired big time, as leaders on both sides of the aisle are in a state of furor over this sale. Everyone from Senate Majority Leader Bill Frist (R-TN), House Speaker Dennis Hastert (R-IL) to House Minority Leader Nancy Pelosi (D-CA) has lined up against the president, who vows to veto any legislation to stop the deal. But it would seem likely that Congress would have the necessary votes to overturn such a veto.

What is with this administration, and when will it stop the lunacy? Just when you think it'd learn its lesson--i.e. WMD, the Katrina response, Harriet Miers, NSA warrantless wiretappings, Cheney's four-day post-shooting silence--they bungle yet another matter. Either they just don't give a shit, or they're the most inept group of politicians to ever hit Washington. I'm not sure which is more dangerous.
Posted by The Ostroy Report at 7:21 AM

I heard this morning that this process took much longer than 45 days and that much of this deal had been known about and reported on for quite some time via financial news.

Still curious about the 2 appointees made by Bush with such close ties to DPW. There must be a quid pro quo............

If you just watch every time bush does something there is more behind it than meets the eye,he not worriedabout terriost or anything else.I read here the other day in Lew Rockwell that since afghanistan its had an 87% increase in its dope crop. so now dont this port deal fall in place.
Makes a automatic place to sell it.His own people in the security spot every thing is in place
Incedently look up the Bush family history and you have a few answers.

Fuck... at least give this to Halliburton or Black Water...

If there is one thing the Bush administration is lacking, it is definitely INTEGRITY. I'm not sure the way Bush is using the government office to line his pockets and the pockets of his friends is illegal. If it was, wouldn't there already be lawsuits against Haliburton / Iraq? Or How about the Deconstruction of Energy Policies which benefit his Texas Friends and those of his Father? Or the lack of prosecution against the oil companies that held America Hostage for high gas prices after Katrina...which incidently was a direct result of his negligence to maintain infrastructure of this country ...AS he was pouring BILLIONS into Iraq to make their completely undemocratic country into a democracy..HAHAHA..trying to completely change their culture of a thousand years. How many other business deals have not made press benefiting our INTEGRITY-LACKING president?

Yes it is true, incompetency and greed are not crimes. What is a crime is somehow our nation stood by motionless as one of Bush's family friends declared...we don't need to count these ballots in Florida. Bush is the president.

The key to it all is the Repubs in Washington. As long as they do Bush's bidding due to threats of pull back on campaign funds, they are not serving the voters who put them there.

They seem to have a spine lately, but as the election of 2006 nears, it will be interesting to see if they cave.

Cathy
Michigan (The once great state.)

LOOKS LIKE GEORGIE COME OUT OF THE CLOSET AND IS TIP-TOEING THROUGH THE TULIPS WITH HIS LOVER.TAKE THAT GANNON.

Am I the only person who finds it strange that a couple of days before the announcement of the sale of ports Osama came out of hiding and said that there would be new attacks on American soil and that he would never be taken alive? Sounds like some sort of crazed religious mythological martyr-style plan to me...that would involve a lot of MONEY and infiltration into US security at ports of entry...hmmm does anyone even want to try and connect the dots now or should we wait until later...?

Actually, this is probably the best thing Bush could have done - even if he's right (a horrible thought, that), and having P&O being run from Dubai does not compromise nationa security, it's not going to look that way to the public. It's finally going to look to Joe and Jane Average, who have been overlooking his missteps these past five years, that the only interests he has are his own, not those of the people he's supposed to be governing. Even his supporters will start seeing him as the twit he really is.

Do you really think all the "Good Christians" in America who believe Bush was appointed by "god" to install a fascist Christian theocracy in the ashes of our Constitution and who have faith that Bush can do no wrong regardless of how Constitutionally contemptuous he and his corrupt, bumbling administration is will ever realize how much damage the Bush Administration has done to our once great republic?

Once Reagan allowed the control of the Republican Party to be taken over by the Christian Right Conspiracy the fate of our nation was sealed.

Continuing the contempt for science and of the mandates of our once revered Constitution that Reagan initiated, the Busheviks, bought and paid for by big business and enabled by the faithful, ignorantly voting against their own interests, have sold our industrial competence and capabilities to the highest bidders, generally foreign, in the name of “Fair Trade” at the expense of the shrinking American middle class, and now the Bushevics are selling our national security itself to enrich themselves and their cronies.

The really sad and inexcusable thing is that our children and even their children’s children will pay for the reckless destruction of our principled government that Bush and his cronies have been allowed to perpetrate upon our once great country.

If the president sees no need to follow the laws of America, why should I? Oh that's right, because I'm just a citizen...

The last bid against UAE's port bid was on February 10, by Singapore. So why were we told that the deal was speeded up to 30 day review instead of 45 mandated? It wasn't even 30 days. I suggest that it was to cover over the real story behind the Cheney shooting of Harry Whittington. It put the focus back on terrorism even if it made the administration look like baffoons. The Cheney story points to the bigger story. We are being lead by crime families.