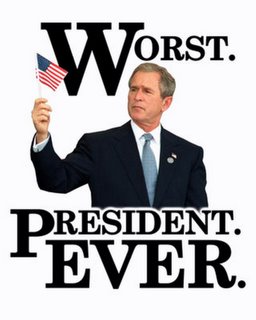 Campaigning in 2000, George W. Bush styled himself the "CEO president," promising to run the country as a business, governing like a disciplined corporate executive, and delegating key day-to-day functions to a skilled team beneath him. To many, it was an interesting departure form politics-as-usual. But 5 1/2 years later, measured by any yardstick, Bush finds himself with a record that screams miserable failure. In corporate America, the CEO reports to the board of directors. A CEO's failure in the corner office often results in trouble in the boardroom. And therein lies the problem. The United States is not a business, Bush is not a CEO, and there is no board of directors. He clearly lacks accountability. There's no one to report to, and no one to show him the door.

What's more, a new CBS poll released today shows the president's approval rating at an all-time low 34%. His hatchetman Cheney's rating is even more pathetic at 18%. In Bush's corporate fantasyland scenario, voters are therefore shareholders. Well, the shareholders have just rendered a vote of no confidence.

The Bush administration has conducted its business in the most secretive manner in the history of the presidency. It has defiled the Constitution, thumbing its nose at the sacred principles of checks and balances, the separation of powers, and the rule of law. In fact, in the Bush monarchy, King George's mantra is, "I am not above the law, I am the law." What happens in a Democracy when its leadership--those duly elected to carry out the will of the people--violates its owns rules? What message is sent to the American people when the president continuously demonstrates that our nation's laws are mere instruments that he can twist and mangle to further his own political agenda?

Ok, those are some of the more egregious crimes he's committed since 2000. What about sheer performance in office? The black hole in Iraq; the failure to capture Osama bin Laden; allowing N. Korea and Iran to expand nuclear weapons programs; the sagging economy with record deficits, gas and oil prices; rising interest rates and inflation; the dreadful response to Katrina and Rita; the ineptitude of hired hands like Cheney, Rumsfeld, Libby, Chertoff, 'Brownie' Brown and others; the Medicare prescription drug failure. The list seems endless.

CEO presidency? That's laughable. With his abysmal record, Bush deserves to follow in the paths of Ken Lay, Bernie Ebbers, Sam Waksal and other former corporate titans who left devastation and destruction in their tracks.
Posted by The Ostroy Report at 8:52 AM

I can't believe Dick Cheney has an only 18% approval rating.

Nothing has only 18% approval in America. Shoplifting polls better.

American's moral values must be called into question: where could they have possibly gotten this "shoot first, ask questions later" attitude toward our VP?

Good story Andy and all I can say is see my comments in the article below this one.

I guess Andy you are not interested much in the truth here. You have had plenty of time before posting about this poll to note how skewed it was with 272 Republicans polled vs. 409 Democrats.

While I expect you to spin and "play rough", I am very disappointed in your purposeful complicity in this lie. Do you really want to tie your credibility to CBS's sinking ship just to score a cheap political point?

"duly elected" is laughable too!

All I can Stands, there's one problem with your CBS conspiracy theory - Bush's poll numbers fell the most among Republicans -11%.
How do you and your fellow Dittoheads explain that?

OH MY GOD...it's the return of Spinachboy...and he's load for BEAR with a Pipe full of FOX NEWS PSUEDO FACTS...run for your lives!!!!!

Shouldn't this administration be up for performance review - ie- impeachment?

BTW, nice one Joe Smoe! I can't wait for the next rebuttal!

Oh, and Bush's approval rating dropped by 3 points in the reddest state of all, Utah, and there ain't nothing there but Republicans! That's a drop among the disciples of autopilot thinking and voting!

"there's one problem with your CBS conspiracy theory"

So now showing that they polled over 100 more Dems than GOP is a conspiracy theory. Sorry, it is called Math.

Once they breached trust at the starting gate why bother looking at the rest of the numbers?

Once a poll shows it has a preplanned outcome, you simply throw it in the trash can. Of course polls in general are pretty worthless.

Does that include FOX NEWS POLLS oh eater of Rancid Spinach and bad tasting Olive Oil?

Spinachboy said: "Once they breached trust at the starting gate why bother looking at the rest of the numbers?"


So does that mean that we should start believing anything the Bush Admin says given all that they have promised and told us to this point has been wrong or a lie???

Smoe, I think you have missed me. You asked about me several posts ago and I responded, but you must have been on vacation.

No just stirring the pot at other blogs.

Looks like your fearless leader is taking it on the chin these days?
What is the excuse for the Iraq war this week? Things don't look so PEACHY there anymore.

You GOP flagwavers are gonna have a rough one come Nov.

"Looks like your fearless leader is taking it on the chin these days? "

But it is so fun watching the Dems trying and yet failing to take advantage of it. They seem to always look even worse than Bush.


"You GOP flagwavers are gonna have a rough one come Nov."

Maybe. I don't think so, but maybe. I can deal with it, but I doubt libs can take another GOP victory. Of course if Dems win big in Nov, they will blow it for '08. People will get a big reminder why they put the "Repugs" in in the first place. Blogging would be exceptionally fun with the Dems in power.

But it is so fun watching the Dems trying and yet failing to take advantage of it. They seem to always look even worse than Bush.

All we gotta do is sit back and let him shoot himself in the foot...which he does a lot these days. Seems like he knew Katrina was gonna be bad and once again blew it.


Seems like the majority of troops see this as a futile war. Only Bush is too blind to see that it's Civil War and the troops will be in the middle.


Maybe. I don't think so, but maybe. I can deal with it, but I doubt libs can take another GOP victory. Of course if Dems win big in Nov, they will blow it for '08. People will get a big reminder why they put the "Repugs" in in the first place. Blogging would be exceptionally fun with the Dems in power.


Yeah, your used to it cause you already live in a Blue State. The real test will be the DIMWitted Inbreds down south. With a large number of them fighting and dying in Iraq and a lot of their jobs being shipped overseas they maybe thinking that your GODLY Half wit may not have their best interests at heart. Also, I'm sure the people that live near those ports he wants to turn over to the UAE are starting to think the same.

I think that after Bush, when all the info of the damage he has done comes out, 8 LONG years will be enough.

All I Can Stands says: "Once they breached trust at the starting gate why bother looking at the rest of the numbers?"

Hey stands, I guess you feel the same way over how Bush & Co stole the election in Ohio, Florida and elsewhere through election fraud and voter disenfranchisement, huh?

"Hey stands, I guess you feel the same way over how Bush & Co stole the election in Ohio, Florida and elsewhere through election fraud and voter disenfranchisement, huh?"

Santa Claus and the tooth fairy too. I love it when you libs think the election is stolen from you instead of facing the fact that your message and candidates are usually not worthy of a vote. Makes it a lot easier.