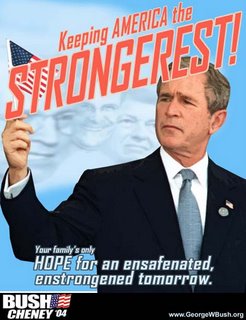 During the Bush administration's initial review of the $7-billion United Arab Emirates ports deal, the Coast Guard sounded the alarm by citing "intelligence gaps" that made it difficult to determine if the Dubai Ports World company--the state owned UAE entity which bought the port operations from Britain's Peninsula & Oriental Steam Navigation Co--could safeguard America's homeland security and prevent terrorists from infiltrating its ranks.

"There are many intelligence gaps concerning the potential for DPW or P&P assets to support terrorist operations, that precludes an overall threat assessment," the Coast Guard report said. The document was part of a report by the inter-agency panel with the unwieldy acronym of CFIUS--the Committee on Foreign Investment in the United States (which includes Homeland Security, Treasury and other departments)--which approved the sale. The report was released Monday at a Senate briefing.

So lo and behold, the Bushies have lied once again. They approved the deal, they said, because it met the rigorous scrutiny of CFIUS and has been deemed a non-threat to the United States. Yet all the while it knew about the Coast Guard's major concerns and failed to tell us about it. Another bungled affair? You betchya.

As for the Bushies' assessment of the Coast Guard itself, the truth is mangled even further. The president keeps telling us it's not the UAE or Dubai Ports World that will be charged with safeguarding America's gateways, but the Coast Guard. True. The Coast Guard is principally responsible for protecting our ports and the roughly 100,000 miles of waterways. But according to a recent article in the Wall Street Journal, the Coast Guard has been faced with resource challenges that leave our ports quite vulnerable. According to Kim Petersen, president of SeaSecure LLC, the nation's largest maritime-security consulting company, the Coast Guard cannot fulfill all of its regulatory, security and search-and-rescue missions. He said the Coast Guard "doesn't have either the people or the necessary physical resources to provide the in-water patrols that are so desperately needed."

It's utterly mind-boggling that Bush has for 4 1/2 years now drilled into our heads that we're fighting a war on terror, and that "we must fight the terrorists over there so that we don't have to fight them over here", yet he's approved the sale of port operations to an Arab nation--one with a drug-trafficking, money-laundering, terrorist-connected recent past--under the flimsiest of circumstances while lying about the true risk.
Posted by The Ostroy Report at 10:59 PM

And why were customary safeguards purposefully left out of the agreement. Namely that the company keep records in the United States and that a person (agent) be appointed to deal with the government.

Why allow this company to operate so secretively? Something stinks, again!

Bush is gonna lose this one and it's gonna hurt.


This deal does STINK, but it is another example of this corrupt administration and it's nepotism and Cronyism. The only reason why the other Republicans are saying anything is that they are scared...REAL SCARED about the Nov. elections and Bush' sagging poll numbers.

So our fearless leader that claims he'll guard us against the GODLESS MUSLIM THREAT is gonna sell us out to them?? Business as usual at the Bush Whitehouse or F&^k the American People if we can make a couple of Bucks

The last bid against UAE's port bid was on February 10, by Singapore. So why were we told that the deal was speeded up to 30 day review instead of 45 mandated? It wasn't even 30 days. I suggest that it was to cover over the real story behind the Cheney shooting of Harry Whittington.