Get This: U.S. Troops Believe in Bush's Iraq Fiasco as Much as Cindy Sheehan 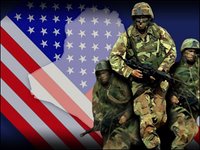 For almost a year now, King George and the royal order of servants in his monarchy have mercilessly vilified grieving mom and anti-war activist Cindy Sheehan as an unpatriotic left-wing crackpot who is not only out of touch with mainstream America but also someone who's dishonoring the soldiers who've been killed as well as those still fighting Bush's vanity project in Iraq. Well guess what? Sheehan apparently does speak for America, and for our troops as well.

A new poll released this week by Le Moyne College/Zogby shows some astounding contradictions to the relentless rhetoric that Bush has been spewing about our soldiers' desire to "complete the mission." 72% of American troops serving in Iraq think the U.S. should exit the country within the next year, while 29% want an immediate pullout, with 22% calling for a withdrawal in six months (John Murtha, are you listening?). Only 23% believes the Bush mantra that they should stay "as long as they are needed." While 58% say mission is clear, 42% say our role is anything but. Most believe that the enemy we're fighting is comprised of Iraqi insurgents rather than outside terrorists. And perhaps most amazing is that 85% said the U.S. mission is mainly "to retaliate for Saddam’s role in the 9-11 attacks" and 77% said they also believe the primary reason for the war was "to stop Saddam from protecting al Qaeda in Iraq." See how well propaganda works?

Additionally, in a new CBS poll released this week, public approval for Bush's handling of the war has fallen to 30% from 37% in January. What's more, 62% said U.S. efforts in Iraq were failing, up from 54% in January. When you factor all this in with the lack of support from the troops, the conclusion is clear: Cindy Sheehan speaks for America, and Clueless George does not.
Posted by The Ostroy Report at 10:09 AM

I wonder what will happen when the 85% who believe they were sent "to retaliate for Saddam’s role in the 9-11 attacks" and the 77% who said they also believe the primary reason for the war was "to stop Saddam from protecting al Qaeda in Iraq" get home and find out the truth. Will they become deniers as many deny the realities of past conflict(like Rumsfailed, the swiftboaters, et. al.) or psychological basket cases when they realize the carnage they rained down on many innocents. Either way the US will be in for a rough ride for at least a generation when they return.

There will always be those that are too stupid to see the truth even when it is staring them in the face. Yeah, these guys, the wounded and families of the dead are gonna be pissed when they find out they were duped by this half wit and his Neo Con handlers.

Now we see that Bush is set to cut their benefits

Yep, the poor bastards that got sent over there are on track to be screwed just like the Vietnam vets were.

You don't hear the Slack jawed Red staters cheering so loudly these days ...do ya???

I wanna see those Bush Poll numbers in the single digits...give it time...we still got two more years...hahahahahaha

Speaking of Stupid and Clueless. I duke it out with this arm chair tough guy all the time..and no matter how bad the news Bush is ALWAYS right and everyone else is an ally of Hanoi Jane and the DEFEATISTS.

Check it out it's good for a few laughs,but don't expect any facts to back up the slop he spouts..all conjecture and FOX NEWS propaganda like most Rep. sites.

Perfect example of the brainwashed hordes. Just think, that even as Berlin fell and Burned there were still the faithful that thought Hitler was right.

My problem is how can so many voters still approve of this dope. His numbers should be in the single digits now.

For 5 1/2 years now this idiot has done NOTHING for the average American, what kind of record is that? Can you imagine working almost 6 years at your job and in that time you did nothing to earn your keep why would your boss keep you on the payroll? Why are we keeping him in office?

Again I ask any Republican (Popeye are you there) to list 5 things that Bush has done since taking the oath that have helped the average American make their lifes better. The fact is they can't list even one thing and remember the tax cut Bush did was for the rich and not the average citizen.

If Sadaam and Iraq were tied to the 9-11 attacks I know that regarding the Iraq war I would not feel the need to dissent, and I imagine we'd have close to unified front on the issue of the war, just like the R's fantasy (they'd use some other reason to focus their hate for us, though). Assuming the poll's methodology is sound, I don't think a finer point can put on this: people who believe there IS a connection and who are closest to what is going on STILL think that getting out of Iraq is prudent. If you believed that Sadaam/Iraq were involved in the attacks, and if you were a warrior by training and profession, what would it take to move you to the position that it's time to cut our losses? Absolutely amazing.